Well, not necessarily yours. Mine, yes, but maybe not yours. As one of the people that the people whose photos do suck call to fix them, though, I know that a LOT of people’s phone photos suck. If you do happen to be one of those, just allow me, as a complete non-expert, to suggest you to look at and even, dare I say, adjust the settings on your phones camera?

Before I go any further, let me just say that I’m an Android user, so I have no idea what the settings are on an iPhone. I’ve seen some really nice images taken with an iPhone, as well as some really bad ones, so I assume there are adjustments to be made. To find out where to adjust your camera settings, either Google (“HTC EVO 4g Camera Settings”, for example) or look it up in your phones manual. Go for the highest resolution you can and, maybe, manually set your ISO to the lowest setting to cut down the noise in your images – unless you’re shooting your pictures in a really dark setting.

No matter how good the settings on your phones camera are, they probably aren’t going to help out of focus or blurry images. You might try to take multiple shots of whatever you’re photographing, and hope at least one comes out halfway decent – that’s usually my main M.O., but if you are stuck with blurry or out of focus images, what can you do?

More:  Carbonite Cloud Back Up Review and Giveaway! I’m going to go over a couple examples where I did get a little (and a lot) of improvement, either with de-blurring software or in Photoshop CS6. The first is a photo of a turkey. Yes, that is a turkey. Not the eating kind, obviously, but a picture of a figurine my great grandfather got from the 1904 World’s Fair. I have no idea why he decided on a turkey.  The one on the right is closer to how it should look. I’m not dealing with the blown-out whites, today, just the blurry gobbly bits…

The first software I tried was one called Blurrity. I actually like Blurrity more than the others I tried. I’m only going to look at one other here, because a couple of them were so complicated to use that I wouldn’t inflict them on my worst enemy. Blurrity’s interface was fairly straight forward. You have the choice of using the basic parameters or the advanced options. 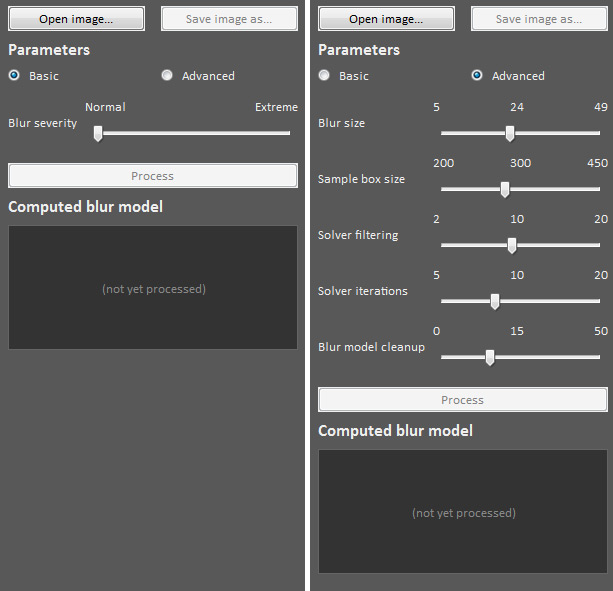 Either one does a decent job on a lightly blurred image, but I found the advanced options gave an all-around better result. Not a perfect, crystal clear result, by any means, but better, with a little more clarity. The only thing drawback with the advanced parameters is that you have to move each slider in very small increments, hit the process button, try the next one, hit process, adjust the first, hit process…process is the key word, here, because it can be a long one. Also, the larger the image is, the longer the processing time, so you might not want to try a huge, high resolution image in Blurrity or you might be at it all day. I also tried software called Focus Magic. The Focus Magic interface is very basic and not attractive all. Of course, if it works, who cares, but I thought I’d mention it.

You have four different parameters to choose from and two adjustments, Blur Width and Amount, then you hit a green light to process. Every time I hit the green light, I got a pop up like this:

I’m not sure where Focus Magic was pulling its memory from, but my system has a proverbial butt-load of system memory, so it was confusing. I could have looked into it further, and would have, but none of my tests results really wowed me enough to want to. You can try Focus Magic for free, if you’d like to see what you can do, but you only get 10 free images and if you try different parameters, each one counts as a different image. Just for the record, I also used my own method to improve blur, HDR Toning in Photoshop CS6. All these parameters in any of this software is doing, essentially, is sharpening, which is what I’m doing with HDR Toning. You need to duplicate your original image, and then flatten it to use HDR Toning. What I try to do in the interface is find the clearest image with the most definition, then I up the detail, radius and strength to get even more definition. 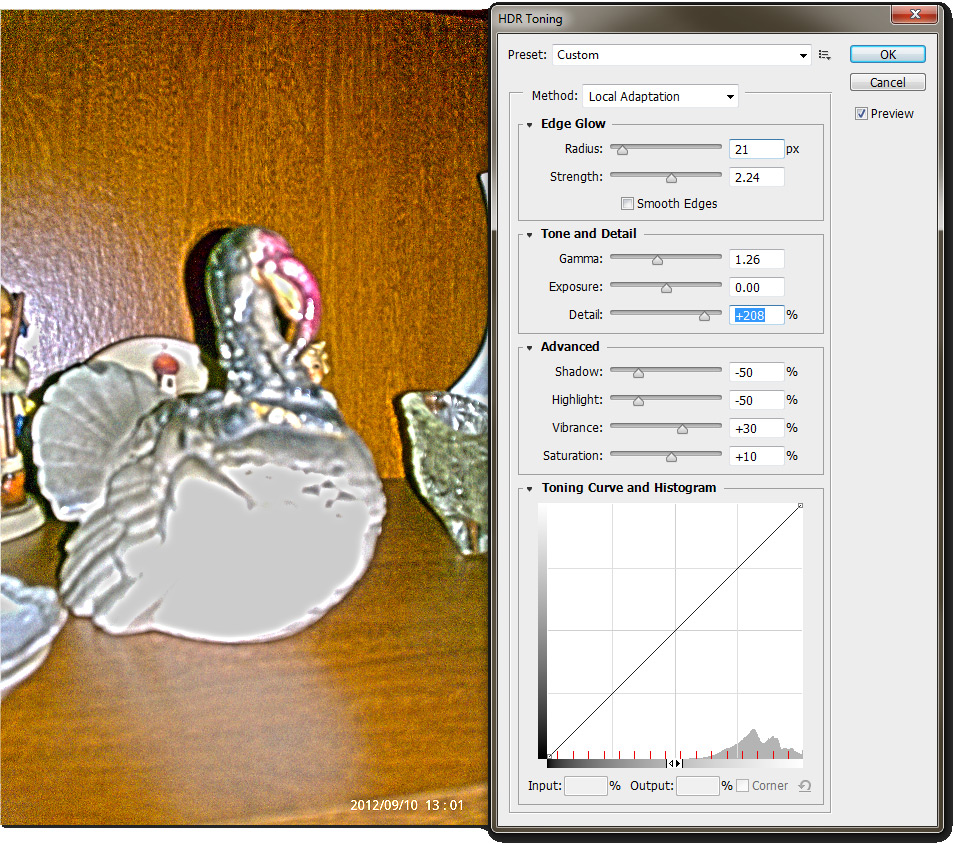 It looks nearly as good as the Blurrity result, though maybe not quite as sharp. The next image I tried was just a plain light blur. 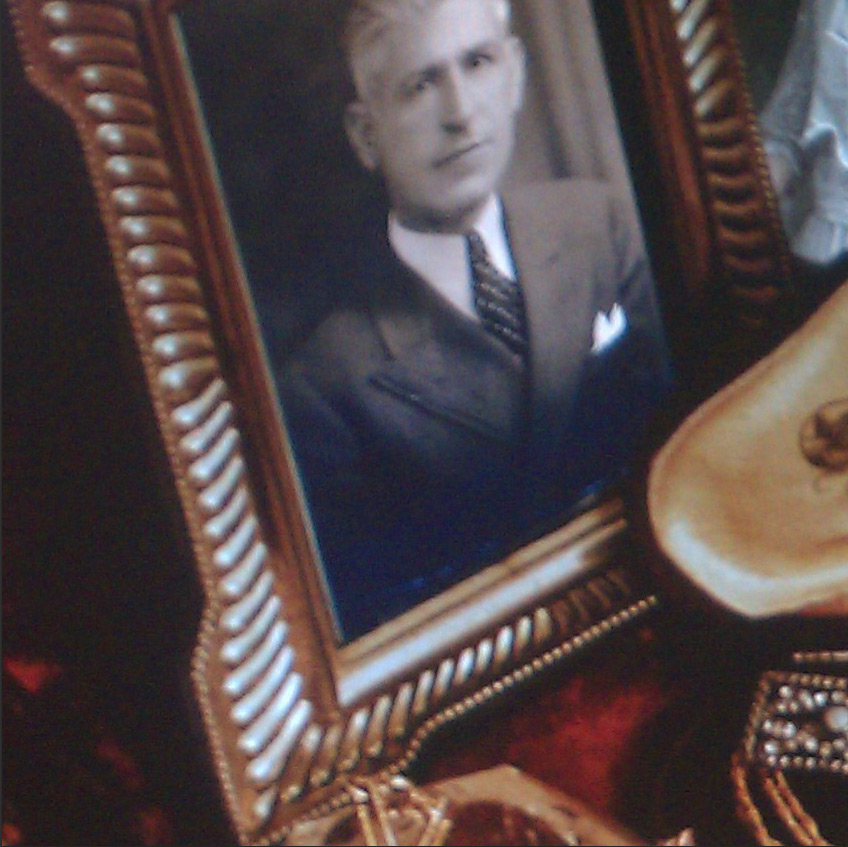 This kind of blur is where Blurrity really shines. Since it’s a simple blur, I went with the Basic parameters. Though a bit grainy, it brought out a lot of detail. I also tried the same image in HDR Toning in Photoshop CS6. The results weren’t nearly as good. I didn’t run this particular image through Focus Magic because I used up all my free images. I’ll be a part of a beta group testing the 64-bit version of the software, though, so I’ll be able to tell you more in the not too distant future. I have hopes that once I’m able to really test it I’ll get some decent results.

So, in conclusion, if your phone photos sucks, neither someone like myself or any software out there will make them pristine and blur free; we might make them better, but not perfect. There are some viable options you can try, however, before deleting those blurry messes. The best thing you can do, though, is to learn more about the camera in your phone, and how to use it. One resource is a book put out by National Geographic and author Aimee Baldridge called The Camera Phone Book. For iPhone users there’s The Best Camera is The One That’s With You, by Chase Jarvis.

In the interest of full disclosure, Blurrity provided me with a full use license, so I was able to explore it more fully. A trial is available, though the images have watermarks. A registration key costs $39. Focus Magic is $45.