Sometimes even I, your humble (*cough*) restorationist, am called upon for a bit of photo retouching. While it’s indeed wonderful to sometimes work with this new-fangled thing called “color”, it is a little out of my comfort zone. This is why it’s very, very good for me to do. When one of my favorite customers came to me and asked if I could do something with some photos that were important for sentimental reasons, but hadn’t come out very well, I jumped at the chance. The photos were taken in a dim hotel with on-camera flash, resulting in the subjects, or in a few cases one of the subjects, being blown out or nearly blown out in the highlights. I don’t profess to be an expert in retouching, at all, but this is what I did with one particular photo where one of the people was ok, but the other was pretty blown out. My job was to even things up a bit.

­In the example photo, you can see that the person in front’s face has some pretty intense hot spots. The second person has a few, also, which I’ll also take care of, but the first thing I want to do is make the person in the forefront a little darker, and more in keeping with the other person. 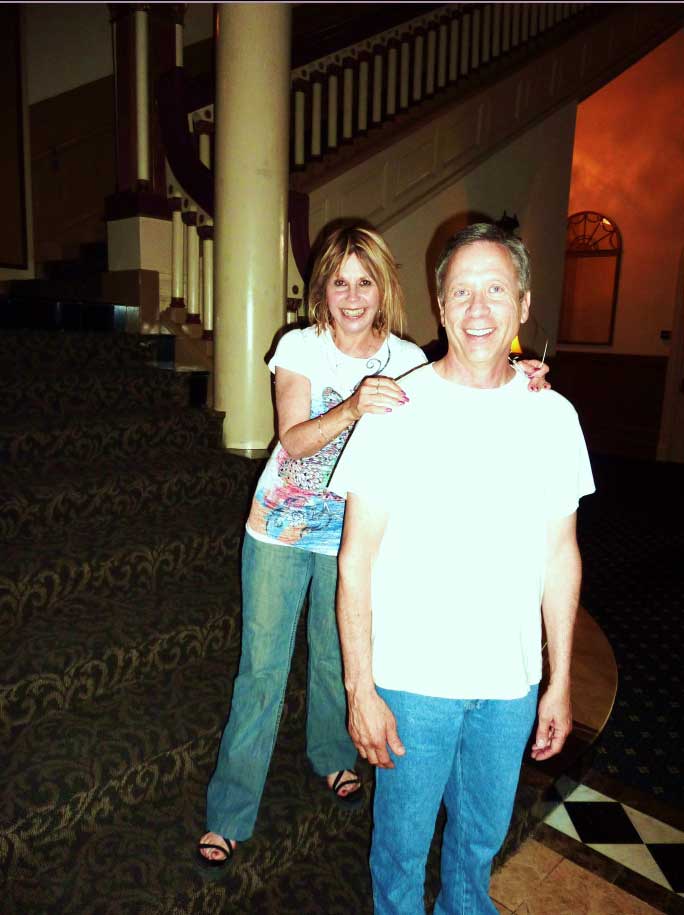 To do this I used a slight Curves adjustment, taking the line down towards the darker end of the histogram, in a color photo that would be towards the right bottom corner. 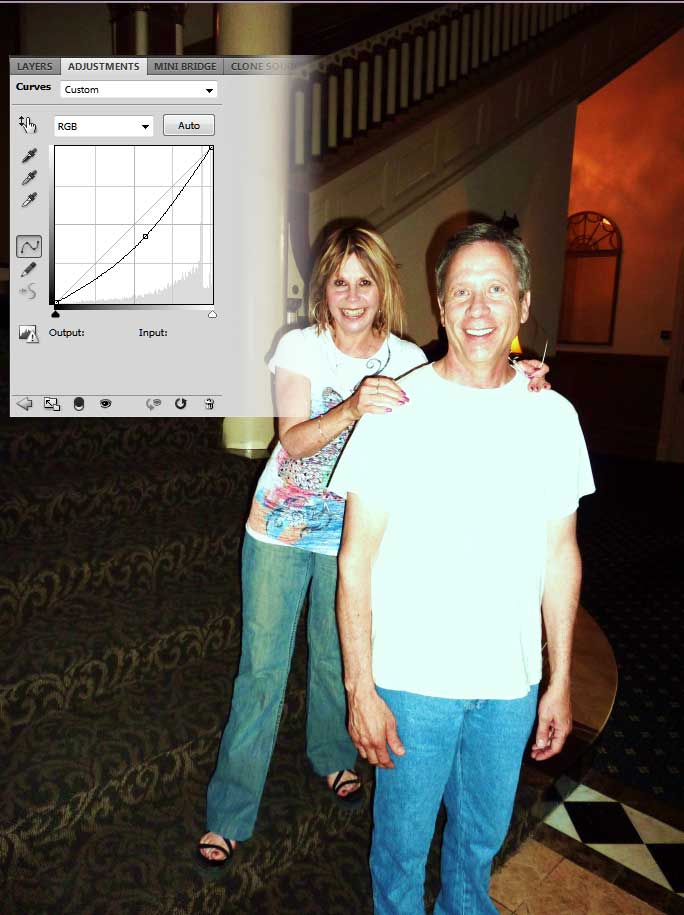 Back in the Layer panel, invert the Curves Adjustment mask by using keyboard shortcut Ctrl (PC) or Cmd (Mac) + I with the mask active. Paint in the area you want to darken up with your Brush tool and the foreground set to white. 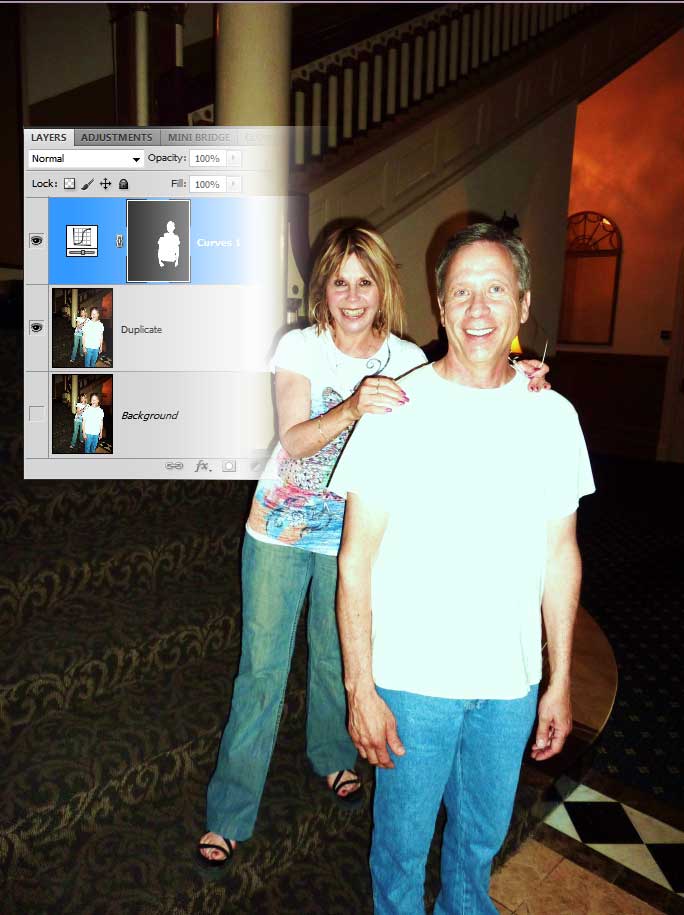 Soften the edges of the mask with a slight Gaussian blur, to blend and bring the opacity of the Curves Adjustment layer down to around 50%. I felt the brightness of the jeans was making the photo too glarey (made up word alert), so I did a Hue/Saturation adjustment layer, using the Auto Select Color icon (the little hand with the finger over the double-sided arrow, in scientific terms.) Once the icon is selected, put your curser, which is now an eyedropper, over the color you want to adjust and move to the left to lower the Saturation, right to increase it. I decreased by 20. Not a huge amount, but enough to lessen the glare some. 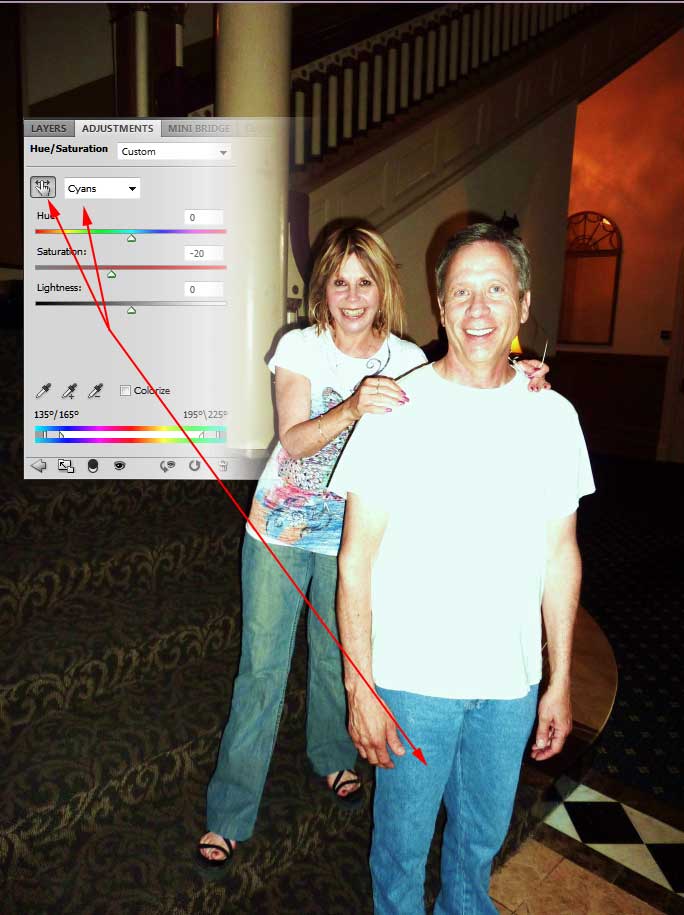 Next I did a little subtle manual adjustment to calm down the hotspots in the faces. Using the Eyedropper tool, sample a skin color from one of the faces that’s not in a blown out area. Next, make a new, blank layer at the top of the Layer stack by using keyboard shortcut Ctrl (PC) or Cmd (Mac) + J. With your brush tool selected, paint the skin color on this blank layer, covering the hot spots. It doesn’t have to be pretty, just provide coverage. 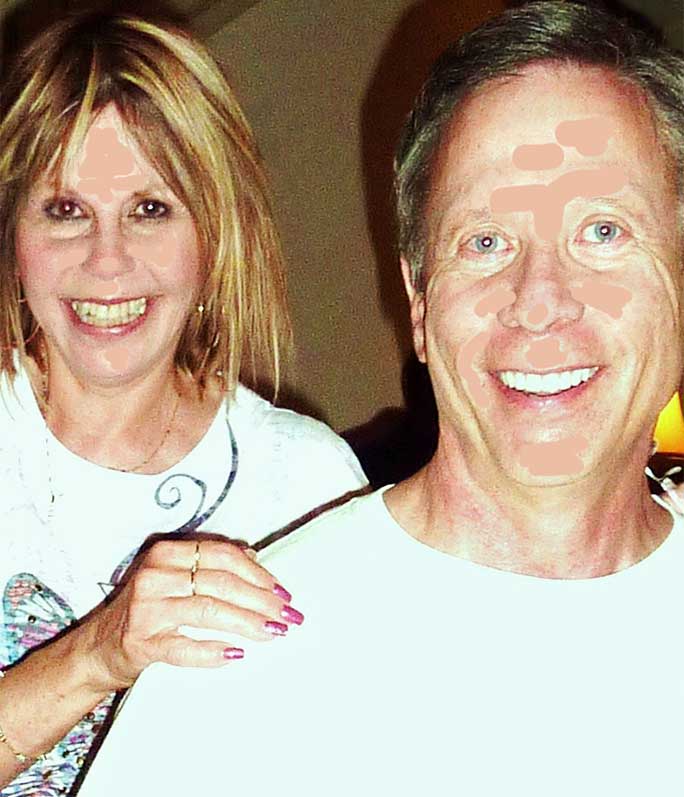 Change the Layer Blend Mode to Color. Go to Filter > Blur > Gaussian Blur and blur slightly to blend. Keep an eye on the preview that the blur isn’t so high that it no longer covers the hot spots. ­At this point, I still thought the person in the foreground was still a wee bit too bright, so I did a Levels Adjustment, bringing the Shadows (Black) slider in just a little towards the right. As with the Curves Adjustment, I inverted the mask (Crtl on PC, Cmd on a Mac + I) and painted in the area with the brush tool, foreground color set to white, blurred the edges of the mask slightly with a Gaussian Blur to help blend, then lower the Opacity to around 50%. 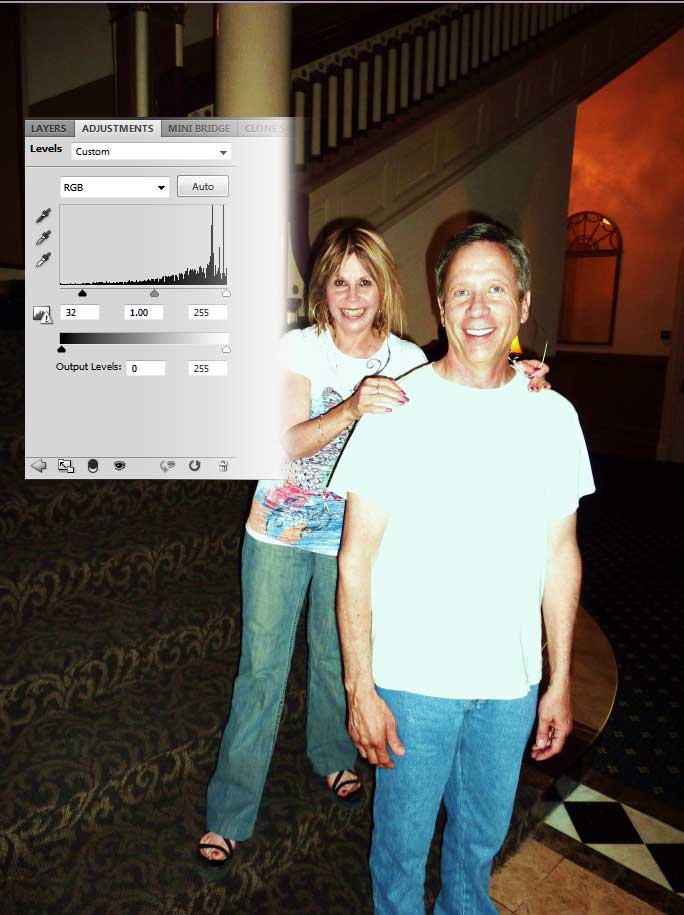 I wanted to tone down a little of the reddish tone of the photo, so I now did a second Levels Adjustment, with no masking. All we’re going to do in this adjustment is take the Shadow (Black) eyedropper and find one of the darkest areas of the photo. That’s it! Well, almost. Now drop the Opacity back a little. I went down to 50%, as the darks were just too dark.  An added benefit of this step, doing this at this point, after all the little hot spot corrections, serves to further blend the adjustment with the original photo. 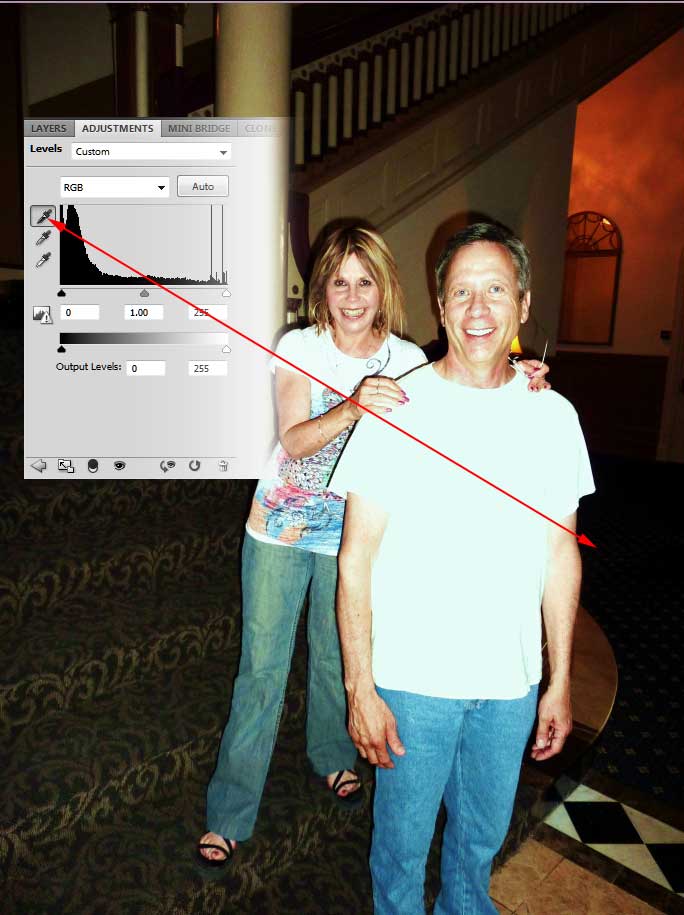 I did a couple more little things to improve the photograph. One was getting rid of two distracting background shadow elements. One was just coming out of the side of the women’s head and the other looked like Tipsy was making ninja-like appearance [Caught me! 🙂 TS]. Just a little Clone Stamp tool on a blank layer took care of that. 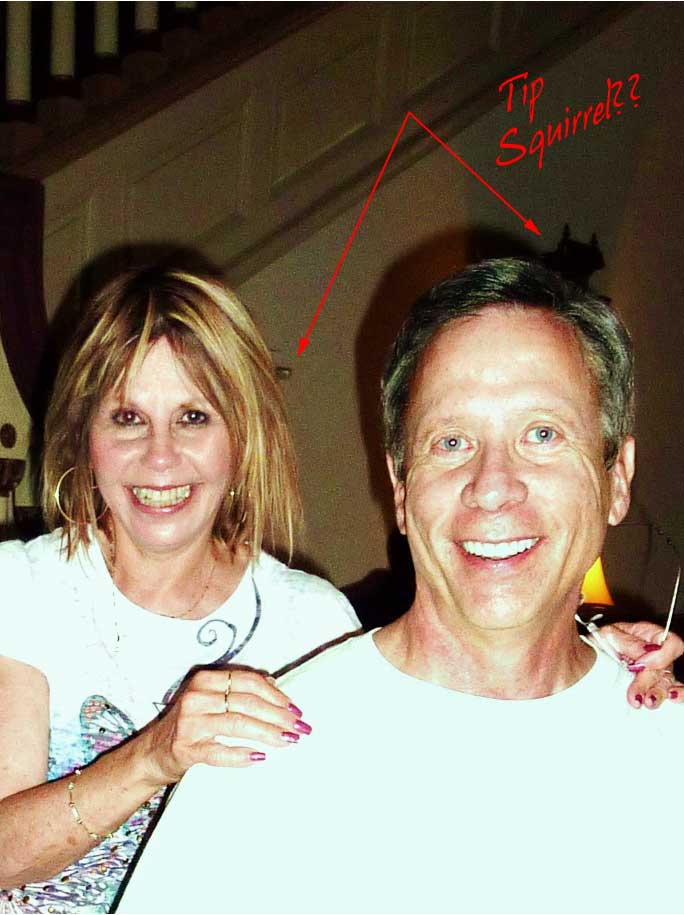 ­The photo’s still not “perfect”, but is considerably better. At least the client thinks so, and that’s what really matters, right? ­There were a number of other ways I could have gone with this; a Levels Adjustment, first, instead of Curves, a Layer Blend Mode, such as Multiply, instead of Curves, etc. Rest assured I did try them all when I did the works, as I almost always do. I picked the one that looked best to me. You might have better luck on your photo with something else. I encourage you to try everything to see what works best on each individual photo! 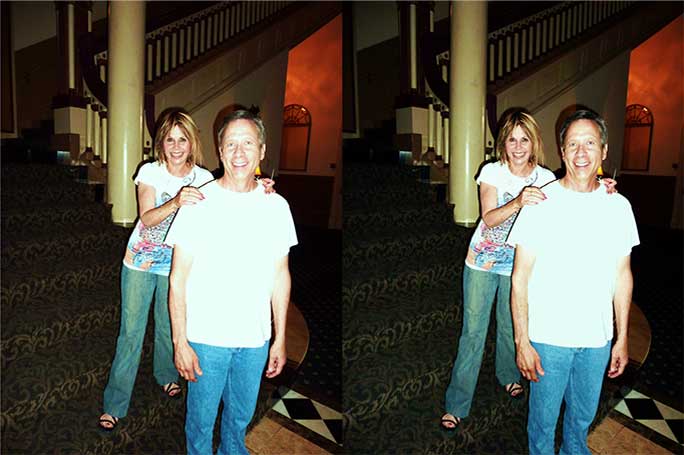 Author Disclaimer: No one technique is ever “the best” for every situation. Every photo is different and different methods should be explored to find which the best in that particular situation is. That being said, let it be known that I attempt to try and teach many different ways of doing things. If I employ one way and it seems to you, the reader, that another way may have worked as well or better, rest assured that the techniques being used are done so in the interest of creative exploration, not nescient omission. ~JS