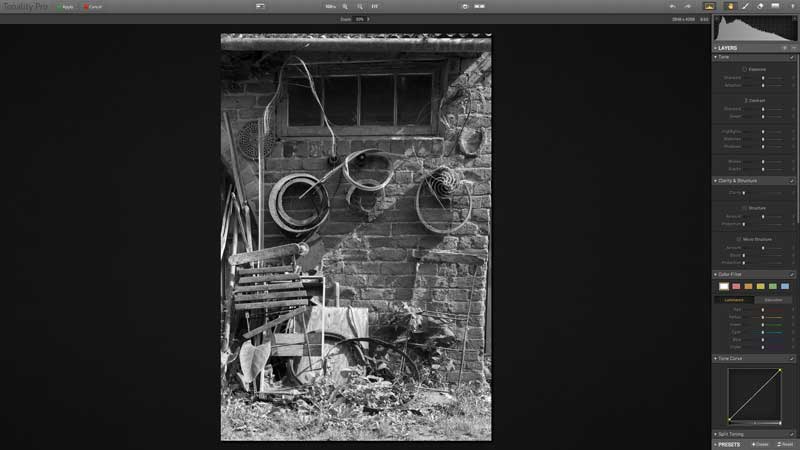 Macphun have just released their first foray into the world of black & white conversion apps and as the name of the software house suggests it only works on one system; which is bad news for some of you as this app is really rather good.

The world of black & white conversion apps is a competitive one these days with the some stiff competition from Nik’s SilverEfex Pro 2, OnOne’s Perfect Black & White and Topaz’s B&W Effects.  Having been a long time user of the first two of these apps (I’ve yet to try the latter) I know it would be a brave/mad man to pitch into this battlefield and hope to come out a winner with your first effort.  But this is what Macphun have done and, boy, have they done it well!

First some details: the app comes in two flavours Tonality and Tonality Pro.  Tonality is available from the App Store  or from the Macphun site currently it retails for just £13.99.  The Pro version is available from Macphun for £50.81 (I expect the price to vary with currency rates) and you can upgrade from the basic version for £27.82. As ever, there is a free trial too.

The basic version of the app is not just a stripped down half-arses version but is properly functional  as a standalone piece of software but the pro version is integrated to work with Photoshop, Lightroom and Apperture (while it still exists).  This is not the only difference between the two.  For a more detailed breakdown is available on Macphun’s website

Right, enough of the dry stuff lets have a look at the software itself. Once you ope up the app it will be quite recognisable to anyone who has used Nik’s or OnOne’s apps as it shares a similar layout and many of the same tools so you can dive right in with a fair idea of what to do.  Instead of going through the tools individually and describing what they do etc. I’ll point out what I think makes the software different and, possibly better than the competition.

A pretty impressive set of reasons for parting with you £13.99?  But I haven’t given you the real reason why you should get this app!  The reason you should buy this app is the sheer quality, depth and, yes, tonality this piece of software manages to achieve.  I go back in this business a fair while and used to shoot large format and the gradation, depth and quality of Tonaility’s conversions remind of the results i used to achieve with those behemoths.

I haven’t been this impresses by a piece of software in a long while; do yourself a favour and give it a try, please!