Can photo restoration be done in Adobe Camera Raw (ACR)? Of course, you know it is. After all, you’ve seen it before, right? Up to a point, that is. You’re not going to be able to remove specks, spots, cracks and tears in ACR, so to be more precise, what you can do is add clarity. That’s it in a nutshell; restoration in ACR is all about clarity. So I suppose you could say that, no, photo restoration cannot be done in ACR, but tonal recovery most certainly can! 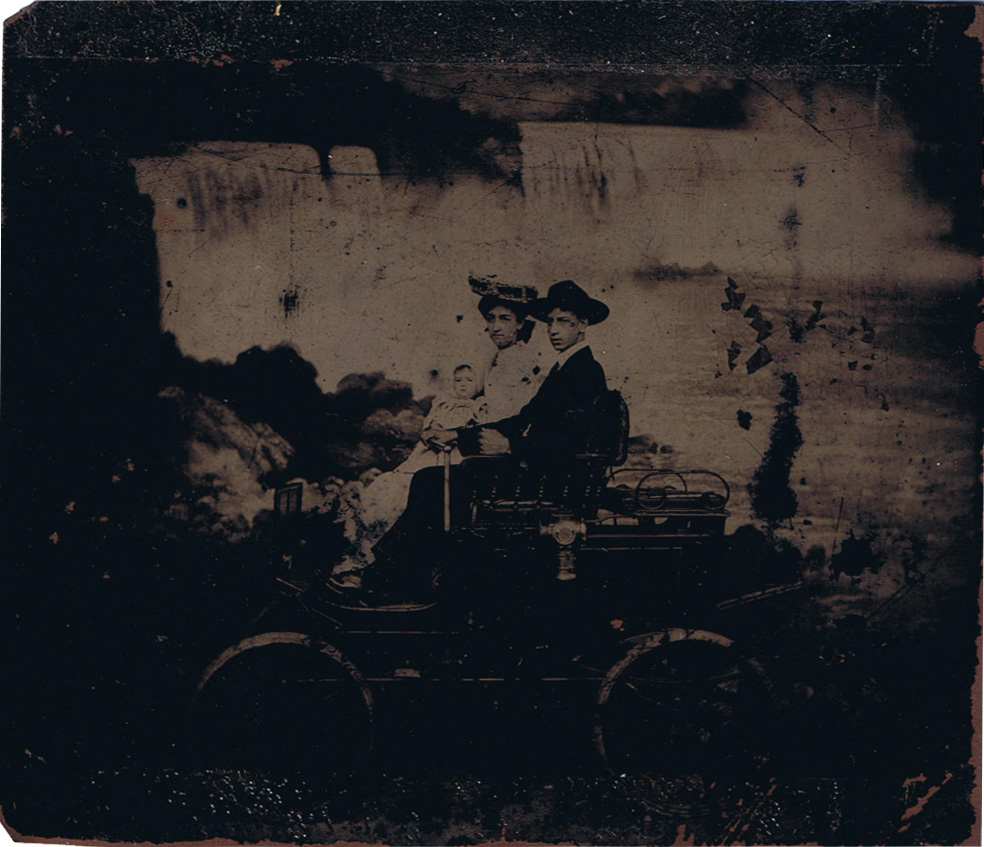 What we have before us is a dark, very muddy tintype. The chemicals have darkened over time until the bottom of the image is all but gone. You can bring the image out with something like a Curves adjustment, using the white eyedropper, for instance, to bring out the light areas and hopefully lighten up the darker areas as well, but the results would typically be fairly harsh. 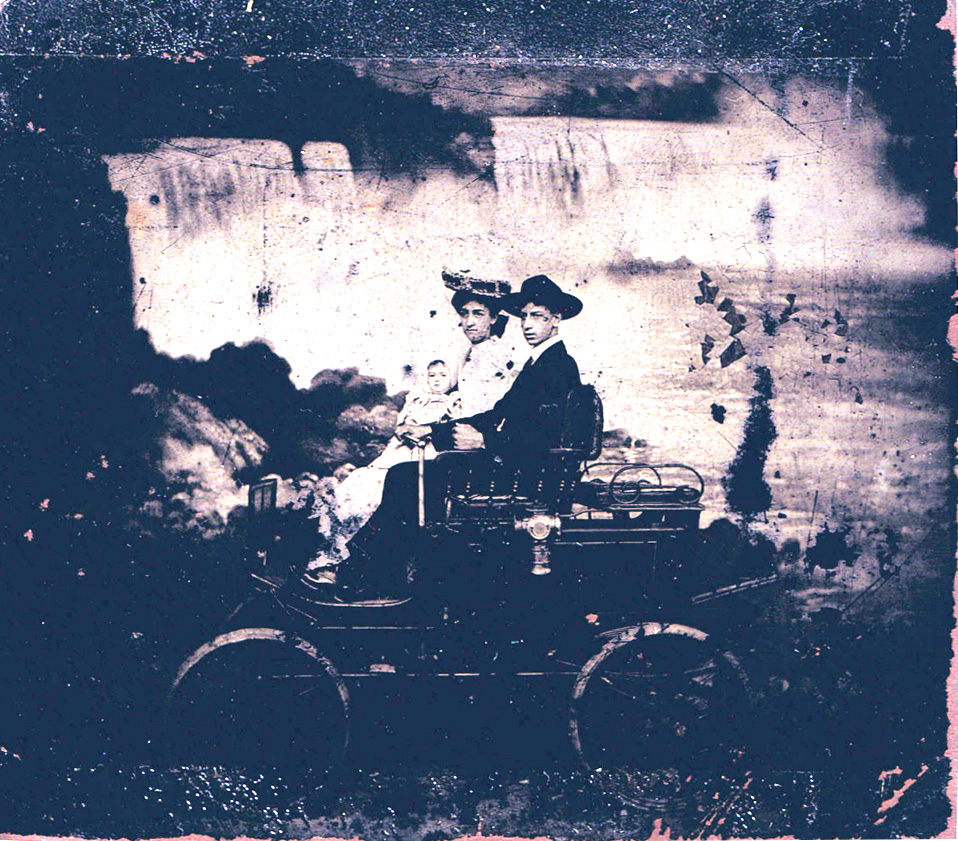 To open your image in ACR in Photoshop CS6 and before, Open Bridge and go to File > Open in Camera Raw. Your files must be in .jpg or .tiff format, by the way, but chances are good that they are. Photoshop CC has ACR right in the Filter menu (Filter > Camera Raw Filter), the single most useful addition to PS CC, in my opinion. You can do your camera raw adjustments right in a .psd file, on its own layer, or on any file type. Brilliant!

Photoshop CC tip: Before opening the ACR filter, duplicate your background layer. Right click on this duplicate layer and select Convert to Smart Object. Proceed to the ACR filter. Now you can go back and make adjustments anytime!

For purposes of this tutorial, I’m just sticking with the basic options in ACR; the first tab. Once your image is open in ACR, go directly to the Clarity slider and start cranking it up. 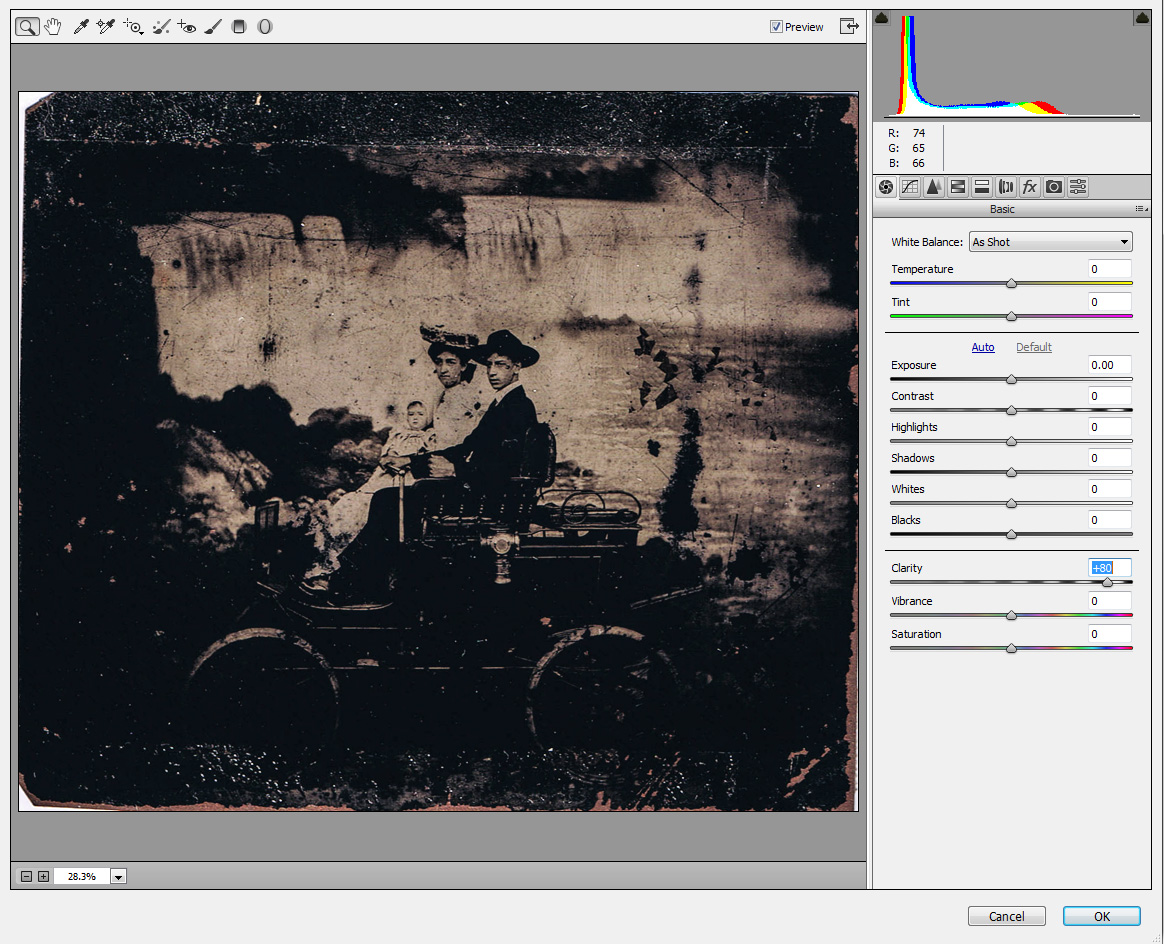 The amount of clarity will be subjective, of course, depending on the image and the amount you clarity you want. Do keep in mind that you want to keep your image looking natural, so if it starts to look off in any way, stop. Once you train your sensibilities toward subtlety in restoration, your instincts will kick in. Until then, start at the +75 – 80% (+ being to the right, – to the left, or the dark side. On this particular image, we don’t want to go towards the Dark Side. The Force is strong with this one…) mark and check to see if anything looks blown out. You want the details brought out, not blown out. If it looks at all blown out, back the slider down; if not, try going up. 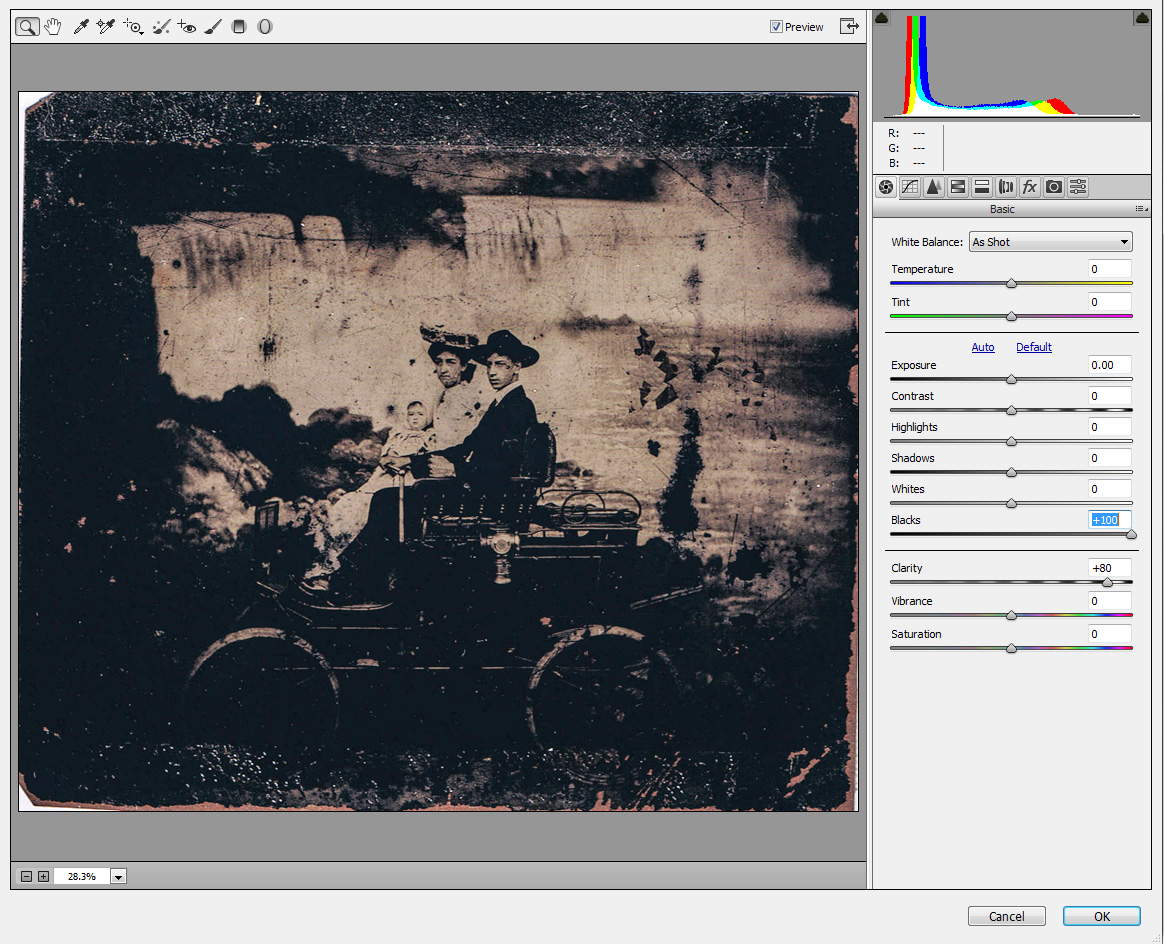 Once your Clarity slider looks good, move on to another; I mostly stick to the tonal sliders, Blacks, Whites, Shadows, Highlights, Contrast and Exposure. The color sliders, Vibrance and Saturation, usually don’t come into play on old black and white toned images. Save them for the colored images. The white balance controls, Temperature and tint, I personally never bring into play simply because I don’t care for the results. I’m not looking to turn the sepia toned image blue. Right now, I’ll just move up from Clarity to Blacks. The Blacks slider increases the black clipping as you drag it to the left, clipping meaning, basically, that it keeps itself to the blacks and doesn’t affect the whites. Dragging it to the right will lighten the shadows up. That’s defiantly what needs to happen with an image as dark as this one. I moved it all the way over to the right. 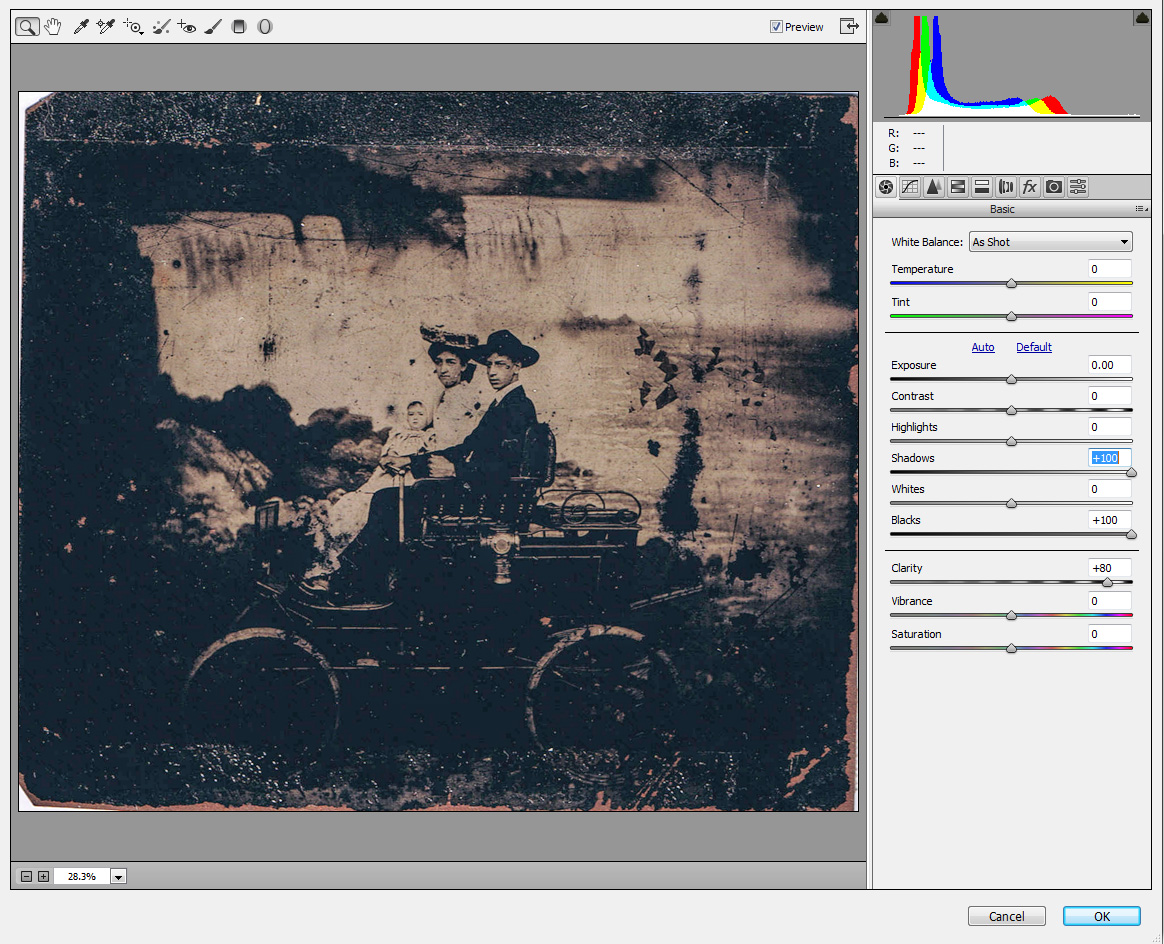 In this case I tried the Whites slider and it didn’t do much that improved this particular image. Whites adjust the white clipping. Blacks and Whites sliders control a narrower range of the same tones as Highlights and Shadows, and in this case I decided to work with the broader range of the lighter tones, since I needed to do less work on those than the dark areas of the image. It’s always a good idea to move all the sliders, just to see the results; if you decide not to use one, just set it back to 0. So now I move on to the Shadows slider. Shadows darkens areas when moved to the right and lightens when moved to the left, while minimizing clipping – more of an overall affect, but still mainly in the darker tones. I also brought the Shadows slider all the way over to the right, to bring out as many dark areas as I could. 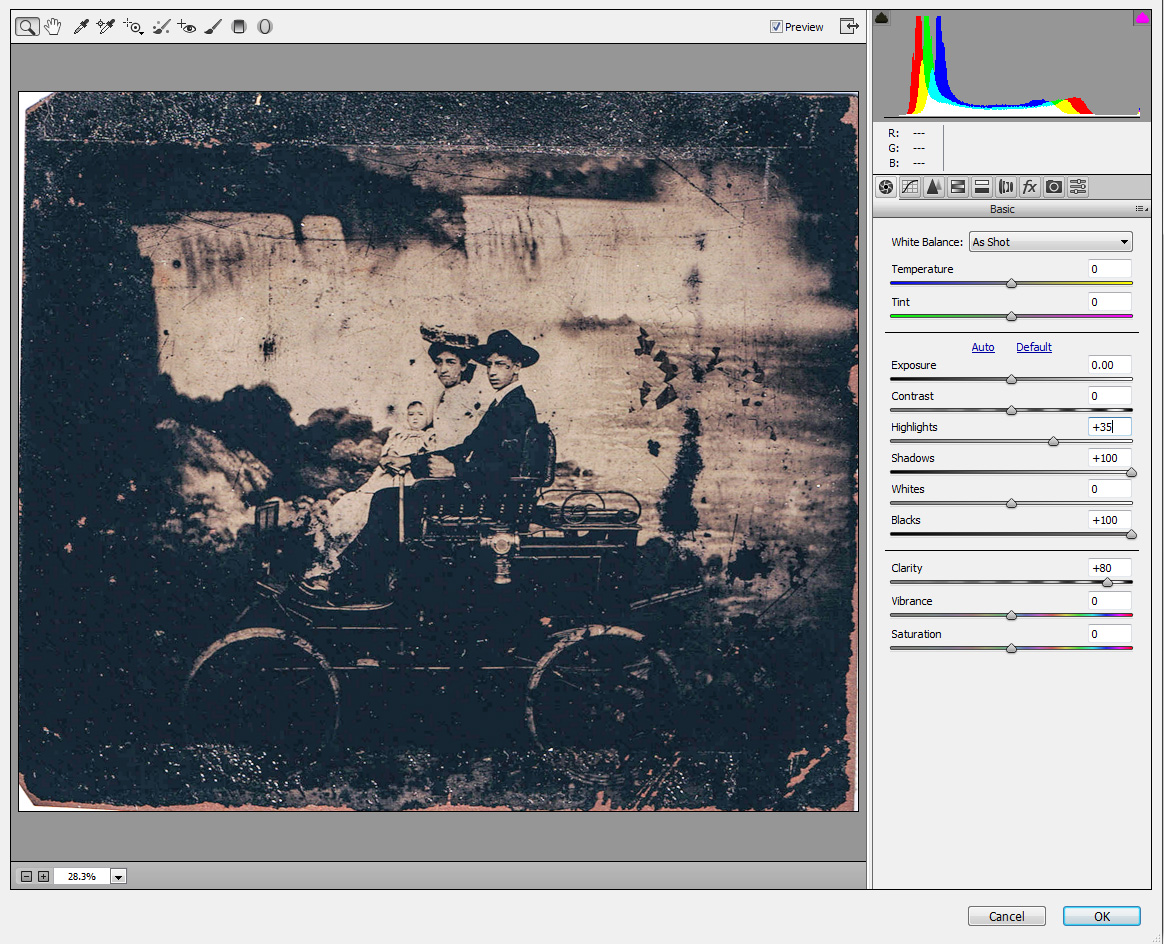 The Highlights slider will do for the lighter areas what Shadows does for the darks. I didn’t bring it up too high, deciding instead on +35, to the right, or brighter direction. I wanted to balance out the lights and darks, more than make the lights super bright. I opted to go only with Highlights because, unlike Whites, it’s more of an overall lightening. I compared the two and just liked the more subtle brightening effect of Highlights. I could just as easily have decided on Whites, or even a combination of the two. That’s why it’s essential to move those sliders and try different combinations, but, when it’s all said and done, there’s no specific formula; it’s all up to how it looks to you! 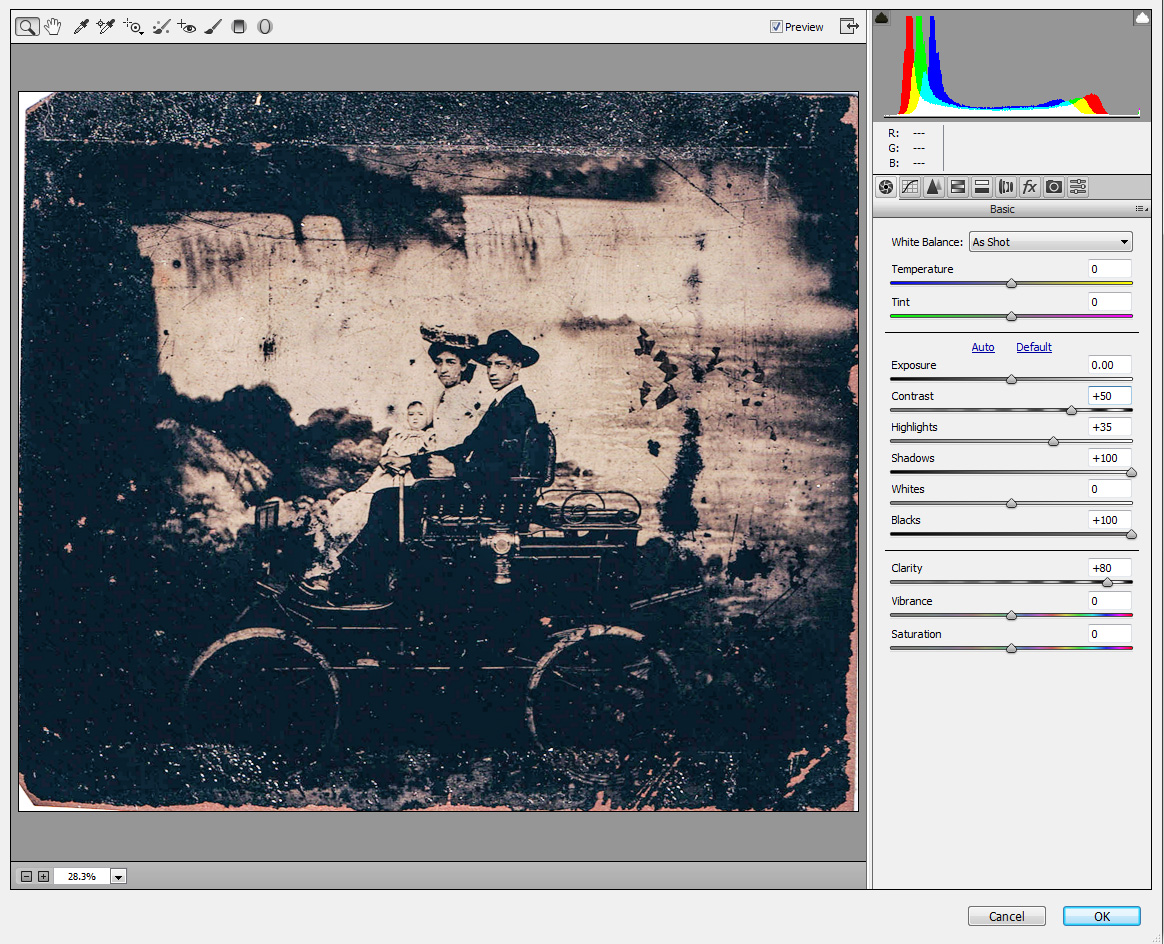 Now that I had a little more of a balance between lights and darks, I went with more of an overall brightening. I started this by brightening up the midtones with Contrast. Since I’d been concentrating on the blacks and whites, I went a little heavy on the midtones, bringing it halfway up towards the Brightside on the right, +50. This not only brightens up Niagara Falls, in the background, but also the details that are left in the car at the bottom of the image. And finally, to bring up the overall image brightness, the Exposure slider; I didn’t want to go too far with this, initially, so I went with a +40 slide. This gave me a good place to start, lightening up some areas to allow me a better palette to work on, and also letting me know which areas were, to all intents and purposes, unrecoverable.

Working in ACR before Photoshop CC is more difficult, seeing as how you can’t easily go back and tweak your settings, but you’ll still get a better starting point most of the time. Now you can go into Photoshop and begin the restoration process. Clarity in ACR is even easier and sometimes more dramatic on images with less damage. The next time you have an old image you want to restore, try putting it through ACR before you begin restoration to see if you can gain some clarity!