Do you use Photoshops Maximum filter? Did you even know there was a Maximum filter in Photoshop? If so, you win a gold star! If not, you should; it may actually come in handy some day!

Lines in images can be a real challenge when it comes to restoration. You can try to subtly blend them away if the lines are thin enough. You can try to select each and every line and change the blend mode if they’re thick enough…okay, let’s get real! I certainly don’t have the time to select tons of lines on an image, do you? I didn’t think so! So what we have, here, is a dilemma of a sort. I had an otherwise simple restoration a few weeks ago, merely compositing a number of images from a family reunion together so the entire family was present and looking in the camera. The proverbial fly in the ointment was that every image had lines going through them. 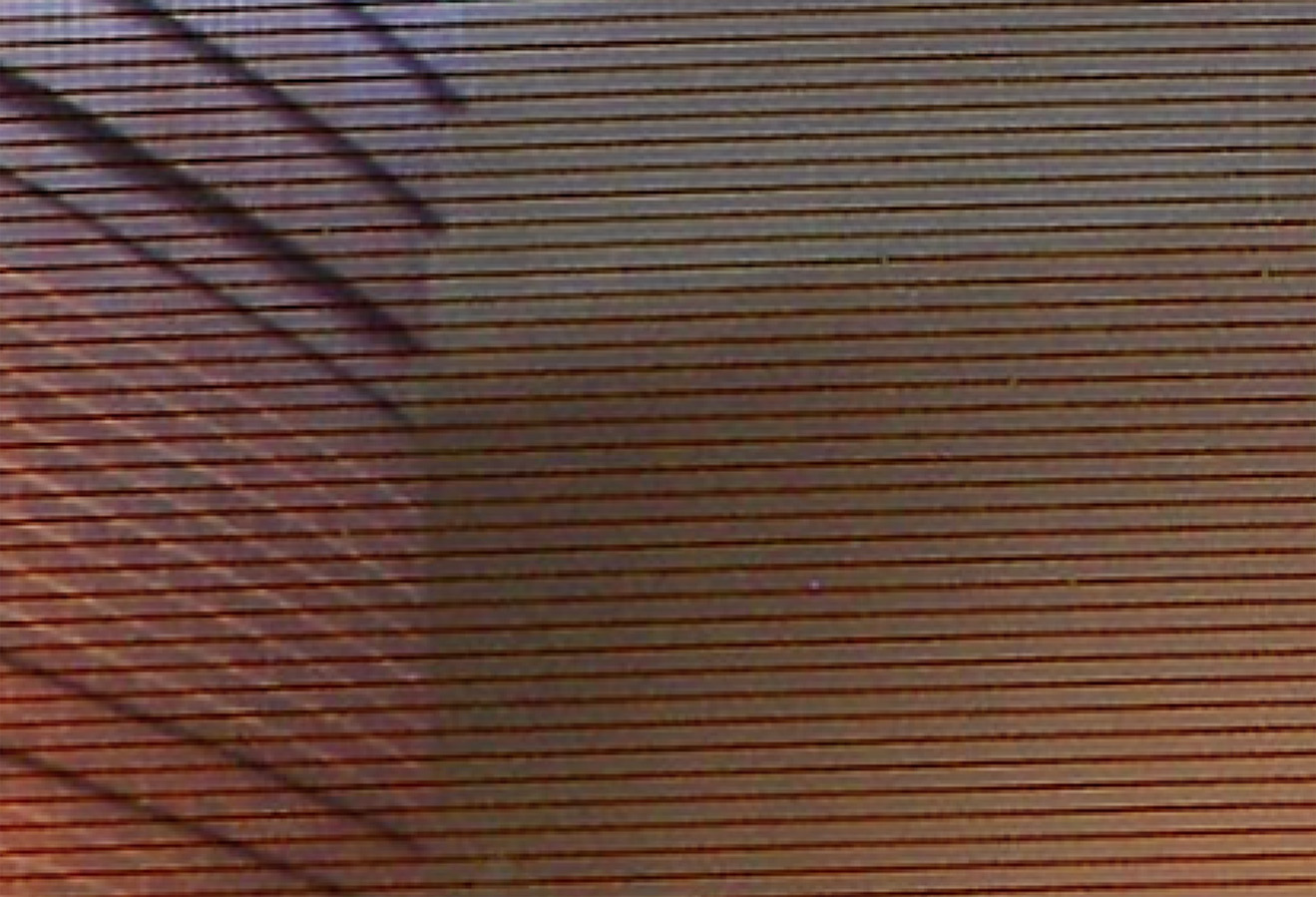 Since the lines were in all the images, that told me that it was a problem with either the camera, the flash card from the camera, or the flash drive the customer brought the images on. Lines can also result from printing and scanning. Of course, the best thing to do is to retake the image or reprint or rescan with different equipment, but in some cases, like 100th family reunion pictures, that’s not an option. There’s one good thing about the lines being the result of faulty equipment, though; my job would have been even harder if just one of the images had lines. At least the surface to be repaired was consistent! 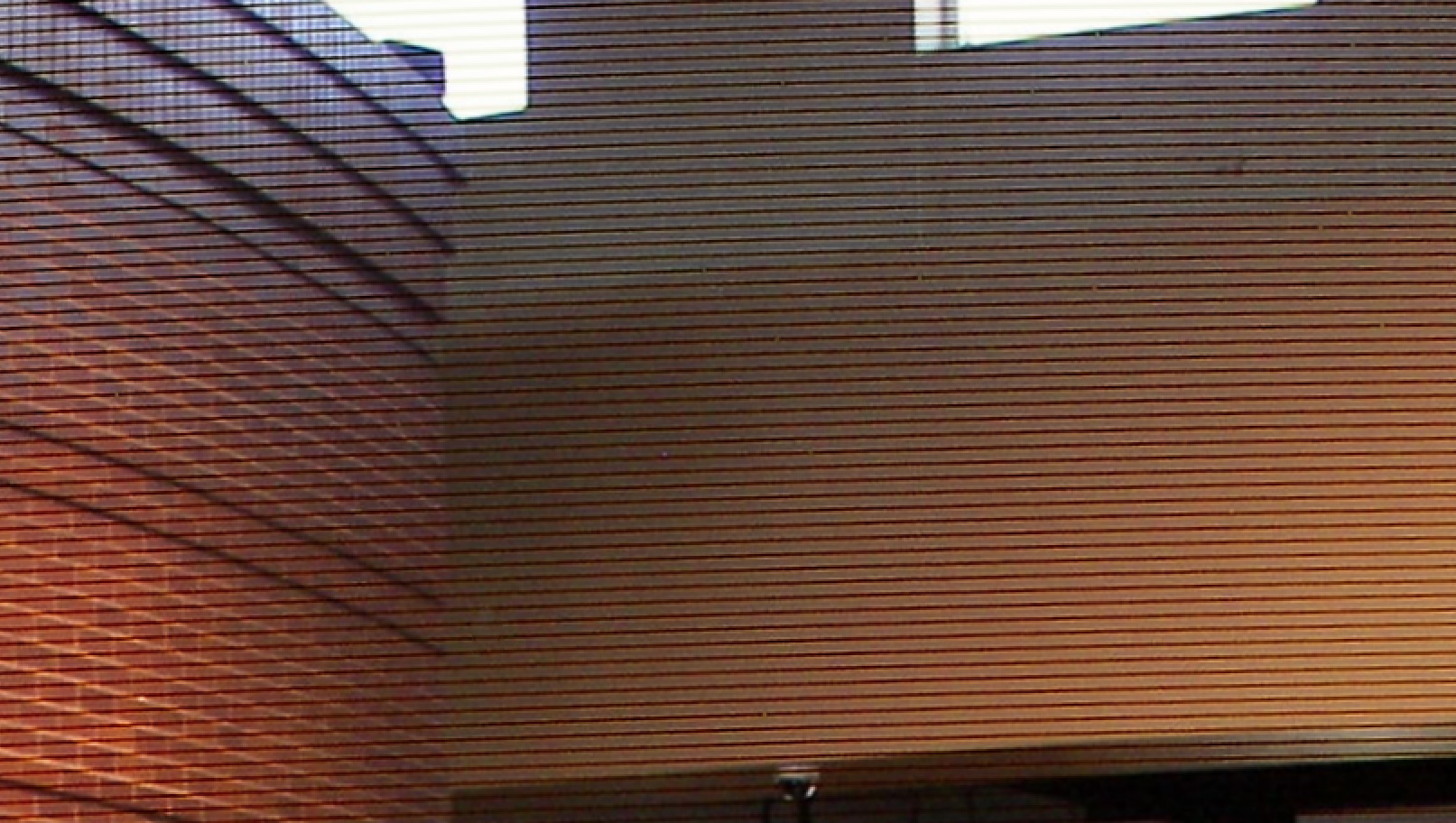 The simplest thing to do, maybe even one of the only things, is to go to Filter > Other > Maximum. Keep the pixel radius low, as low as possible in fact. I’ve never gone above 1; bad things happened when I did. Try it, and see for yourself! Now all there is to do is hit Enter! How simple was that? The Maximum filter increases the lighter portions of the image, decreasing the darker areas, so if you have fairly thin, darker lines, this fix could be perfect. 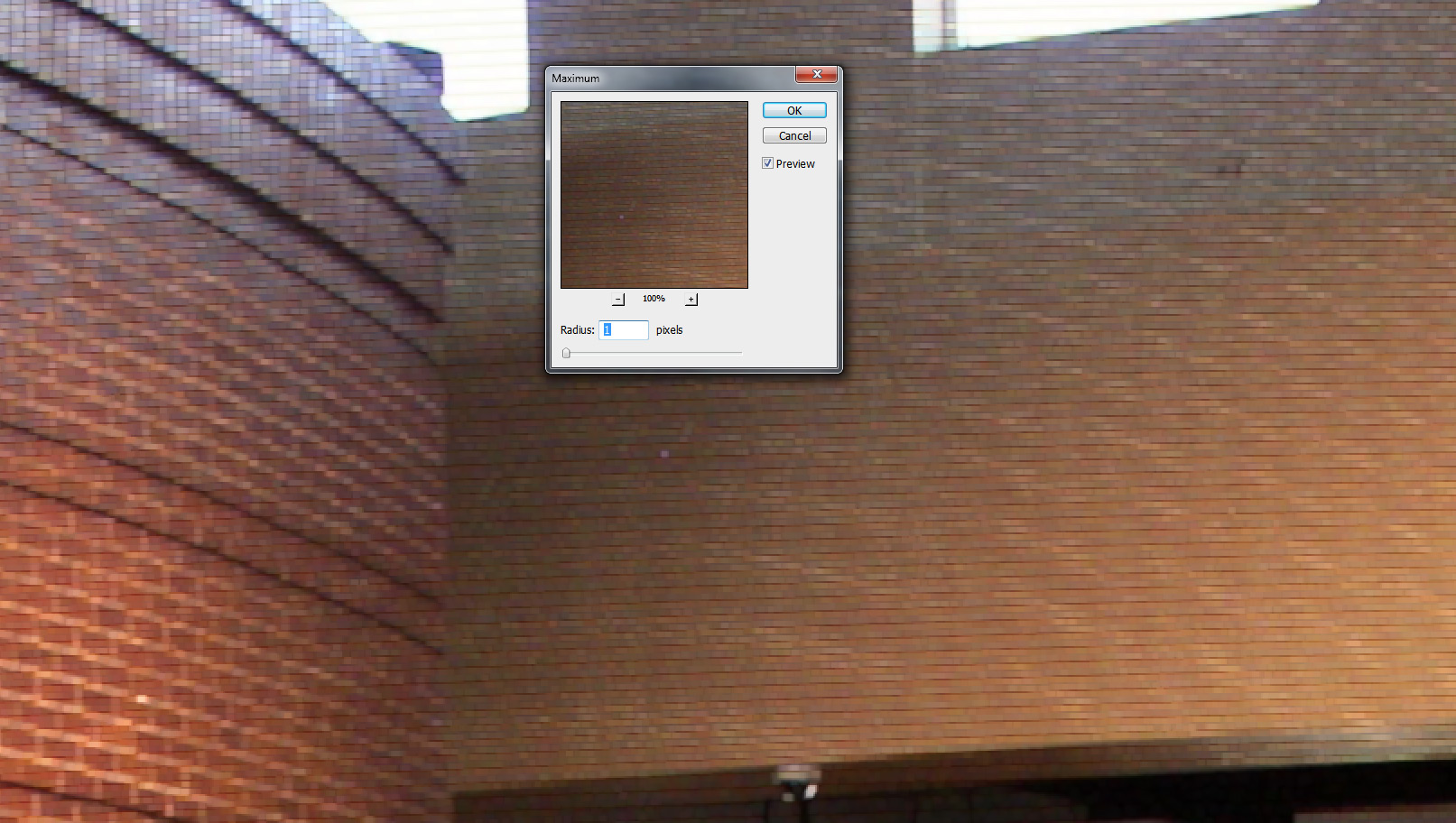 The only drawback that I can see, other than the image being a little softer, less sharp, than it was is that some images, especially those with thicker lines, tend to have a moiré pattern appear after the filter is applied. It’s for you to decide if the result is worse than the lines!

Let’s try the Maximum filter on another image, this one with thinner, slightly lighter lines. 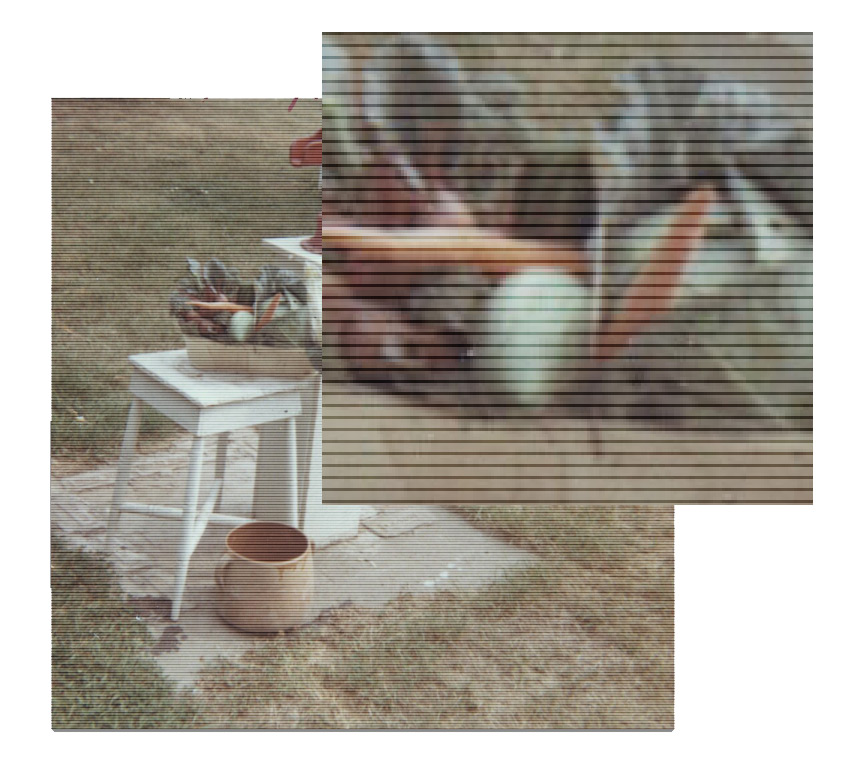 Again, we’ll go to Filter > Other > Maximum, and keep it to a pixel radius of one. 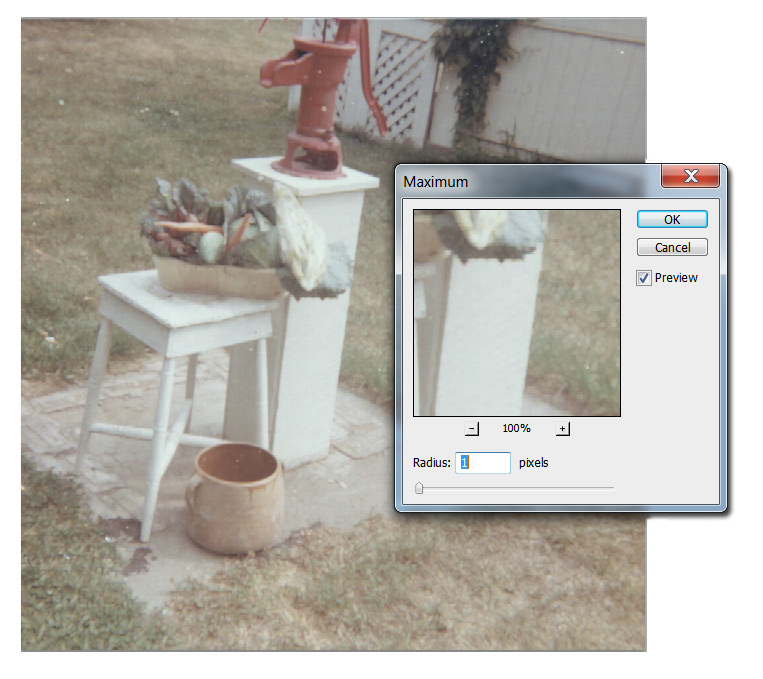 This is the sort of image, those with thinner, lines, where the Maximum filter really shines! It’s still a little soft, and, as all images you use the Max filter on will be, lighter. To get some of the sharpness back, you can duplicate the image (Image > Duplicate) and go to Image > Adjustments > HDR Toning. When it asks if you want to flatten the image, say yes – that’s why we made a duplicate! Scroll through the presets to find the best starting point; I find Photorealistic usually works great. Now start moving the sliders, especially the Detail slider, but also Highlights, Shadows; Vibrance and Saturation if it’s a color image, even Radius and Strength if done very sparingly. Click OK when done to your satisfaction. 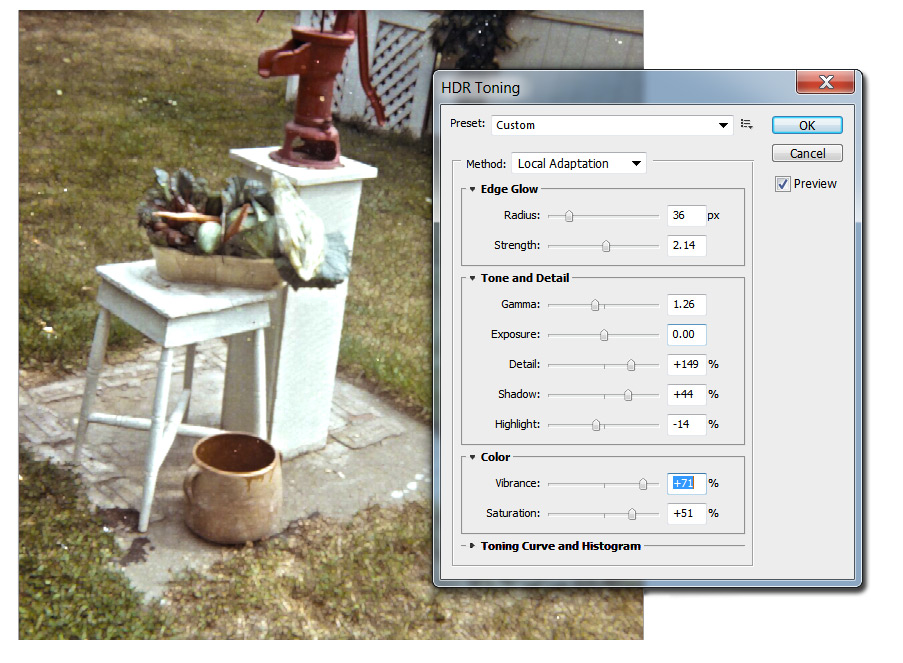 Now use the move tool to move the HDR copy to the tab of the original image, holding down the Shift key to center on top of the image. Change the Layer Blend Mode to Soft Light and lower the Opacity to 75%. If you don’t mind the softness of the image, just use a Curves Adjustment (black eyedropper in a dark area, only) to darken the image up a bit.

If lines in your images are bugging you, give the Maximum filter a try; at the very least it’s better than selecting all those lines! 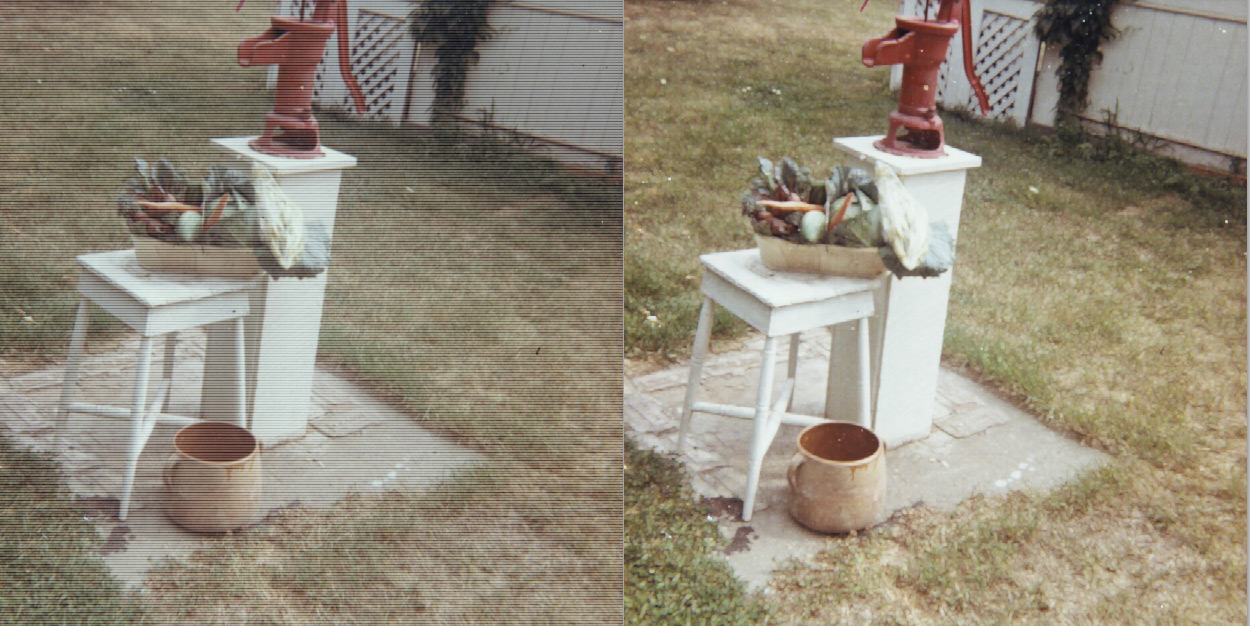