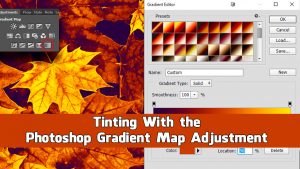 Black and white photography is awesome; a really great photographer can bring out tones and depths in the picture that just make it amazingly beautiful. Ansel Adams, of course, was one of the masters of the art, and part of what made his black and white series so incredible was color. Adams added a very slight tint, usually selenium which cast a slight purple tint to the finished image. It added depth and brought details out.

Before I get started, I just want to point out that the tinting I’m about to show won’t work on Grayscale images in Photoshop, only Black and White. B&W retains it’s Red, Green and Blue color channels, so allows for a color tint to be added and the Grayscale color mode strips the color channels out, leaving only one channel, Gray. That’s why images, even Black and White images should be scanned in color, to retain the power of the color channels; that being said, if you do find yourself with a Grayscale image that you’d like to tint, you can always go into Image > Mode and change it from Grayscale to RGB or you can leave it in Grayscale and put a Duotone over it.

There are many ways of tinting an image, and many of those ways I employ regularly, sometimes trying multiple methods on a 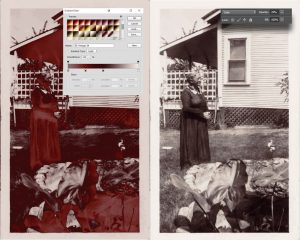 photograph to get the best result because, as you regular users know and you newer to Photoshop will soon learn, every image is different and no one method will work – or work the same – 100% of the time, and different methods, of course make for different results. For the purposes of this article, however, I’m focusing on the Gradient Map adjustment layer for tinting, and using one custom gradient with the crazy hex value combination of #25033F, #C34A01, and #FFE400. Keep in mind that when you make a custom gradient like this, consisting of more than two values, you’ll need to go into the gradient editor and add the additional colors. You can go in and make the entire gradient from the ground up, if you wish, but it makes it easier if you set your foreground and background colors (in my case #25033F is the foreground and #FFE400 is the background color) first. This is also the smart thing to do if you plan on doing more than one image with the same gradient, as the Gradient Map adjustment will always default back to the fore and background colors in the color picker. If you have your base colors set in the color picker, you just need to make a note of the middle value(s). 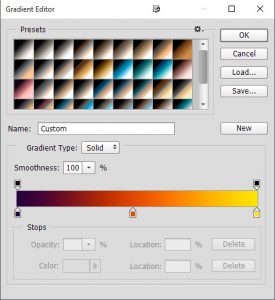 The first image I’m using is a color picture of autumn leaves. 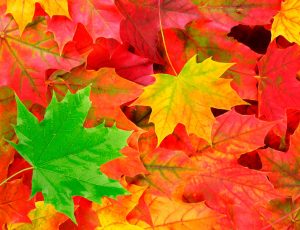 A nice image with some bright color, but still a little flat, so the first thing I want to go is to bring out some detail. The first place I go for this is usually Curves. Using the shadow, or black, eyedropper, I find a sample of the darkest area of the image to click on; If that doesn’t do a lot for me, I go in and adjust, either using the eyedroppers or the histogram itself, by color channel as I did on this image. 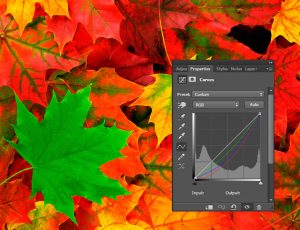 Next I use a Black and White adjustment layer, going through all the presets, using the sliders if necessary, to get a nice B&W that shows the tonal variations, in my case the green preset worked well. As you can see from the two versions, below, the adjustment over the original color image makes for a pretty boring B&W image, but the Curves adjustment brought out the veins in the leaves.

Now I want to bring out even more tonal variation and detail, so I’m going to run it through the Camera Raw Filter (Filter > Camera Raw Filter or Shift+Ctrl+A or Shift +Cmd+ A), pusing the Clarity and Contrast way up. 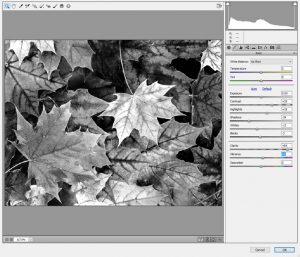 Now I’m ready to start tinting and the first will be the custom gradient, so I set the foreground color to my purple tone, #25033F, and the Background to the yellow tone, #FFE400. Next I click on the Gradient Map in the Adjustments Panel and click on the gradient strip to bring up the Gradient Editor. The gradient will just be the two colors, so you’ll need to click under the gradient strip to bring up another color picker, and add your own color(s) if you want more.

Now comes the fun part, where you can see how many different looks you can get by lowering the opacity and / or using Layer Blend Modes! I ended up going with Soft Light, which turned the crazy color combination into a really nice, deep sepia tone, 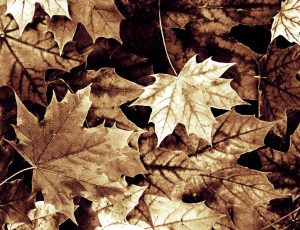 I then lowered the opacity to around 20% to give it just a tint. 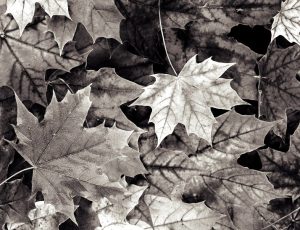 Going back to the point before I added the custom gradient, I went back to the Gradient Map adjustment and changed the gradient to one of the presets, Photographic Toning

I wanted a couple different Selenium tones, so I chose Gold-Selenium 2 first, changing the Layer Blend Mode to Soft Light and lowering the opacity to around 40%, 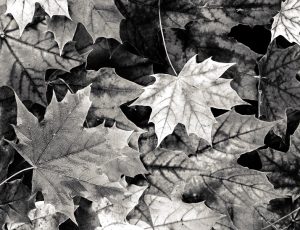 And then went back to the Black and White point and added another Gradient Map adjustment, this time using Blue-Selenium 2, again using Soft Light and 75% opacity. 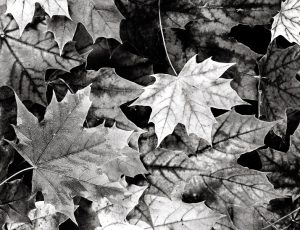 You can’t see a lot of difference between the two, except the Blue-Selenium 2, on the right, makes the shadows a tiny bit darker. I used these two to show how subtle the differences can be. I found myself getting happily lost trying all the combinations of gradients, blend modes and opacities. If I didn’t have a deadline, I’d still be there…

By the way, if you’d like to see a list of the gradient presets, just go to the flyout menu in the Gradient Map panel and change the setting from Small Thumbnail to Small List: 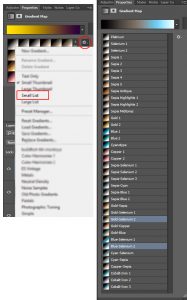 So if you didn’t already, you now know that gradient mapping can be a great way to tint a new Black and White photo, but it’s also a way to tint, in a pleasing way, an old photograph. I’ve used it after removing a ghastly tint, I’ve used it to add dimension to an existing tint that needed a boost, and I’ve used it to liven up a dull B&W. Personally, I feel that straight B&W, un-tinted old photos lack some personality. I’ve had others argue that the original image wasn’t tinted, and that’s true more often than not, but as a photo restorationist, it’s not my job to take the image back to the day it was taken because that’s almost always impossible. I only try to take an image back to the time before most of the natural damage occurred, and by that time the paper and chemicals were starting to discolor. Besides, I do think at least a hint of color does add personality. I started with an image I’m restoring for, and using with permission of, Carolyn Billingsley. Thanks Carolyn! 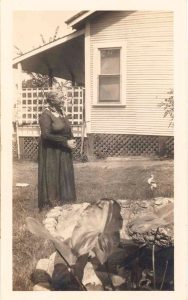 This woman, Carolyn’s Great Grandmother, looks so sweet and proud of her home and garden. The tint is a bit yellow, but not bad as far as horrible tints go. The problem is, there’s some hinkey color casts going on, especially in the area of the dress, so I add a Black and White Adjustment Layer and use the Darker preset, as that was the one that did the most for the image. 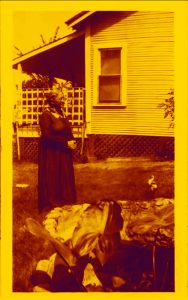 Not attractive. But after I changed the Blend Mode to Soft Light and lowered the Opacity to 50%, it’s not so bad! 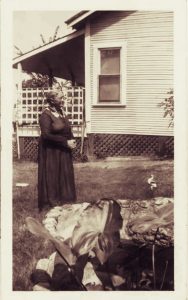 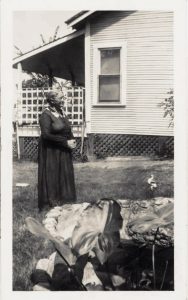 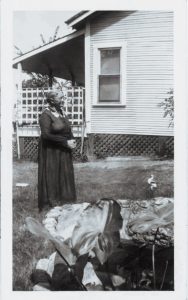 Oh, and just because a gradient looks super scary (like the custom gradient wasn’t scary enough) doesn’t mean it isn’t going to look good once the blend mode’s changed and / or the opacity is lowered; don’t be afraid to try even crazy ones!

If you haven’t used the Gradient Map adjustment to tint your images, give it a try! There’s a lot of fun effects you can come up with as well as making your black and whites a little more interesting!

2 Comments on Tinting With the Photoshop Gradient Map Adjustment