Sometimes a little texture and a little film grain, or “noise” in an old photo is not a bad thing! Seriously, if you start taking everything out of old photos they end up looking worse than when you started! A little texture and grain also creates a look, a feel, that can actually be aesthetically pleasing. On the other hand, a lot of texture, or noise, can have quite the opposite effect.

So what exactly is “noise”? At its very basic, without getting into electrons and amplified signals and stuff, it’s simply (and we all know I am the epitome of simple) anything that was not part of the original image. Fuzzies, grain, blotches, squares, white spots that did not exist in the original scene. In old photographs, noise can be caused by, among many other things, the development process, the paper the photo was printed on and the scanning process when digitizing said photographs. Although much of the latter can be avoided by scanning the images correctly, often we don’t have the luxury of being able to scan from a pristine original and we must make do with what has already been scanned, and rescanned, before making its way to us, or the original, for whatever reason, is no longer available to us.

The market is flooded, right now, with many “anti-noise” plug-ins for Adobe Photoshop and its competitors. Ranging in price from free shareware up to around $200. Most of the better known plug-ins come in at the $40-$100 range. No one is denying that some, if not most, of these products work fairly well on digital images, but how do they work on old photographs? Is it worth the money, or the bother to buy, install and learn to use a plug-in for this purpose? I’ll admit, while I’m curious if an anti-noise plug-in would be helpful in my restoration workflow, my curiosity has only urged me to download and try two of them, and not very extensively, at that.

I found myself becoming irritated at all the sliders and options that weren’t really showing me much in the way of acceptable results. But even if they did, would the average person who perhaps restores a photo or two here and there, a mere fraction of which would even need noise reduction, have the need or desire to mess with a plug-in? Isn’t there a way to get a fairly good (good, not perfect!) result in your existing software? In the case of Photoshop (and Elements), yes, there is! 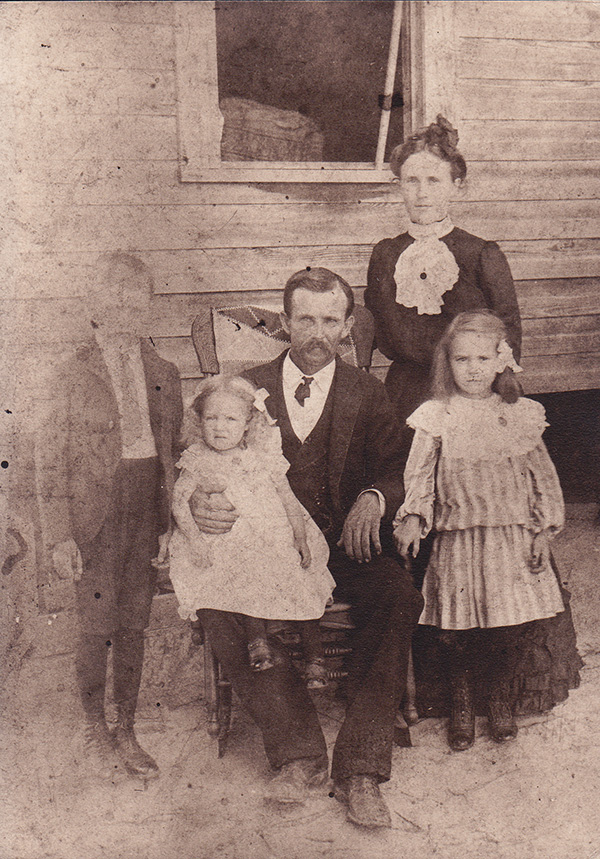 The noise in the sample photograph, provided by the lovely and talented Kelly (better known to most of you who are on Twitter as Herstoryan) with my profound thanks, is fairly severe. It doesn’t look all that bad until you zoom in closer, then it becomes evident. In this photo, we want to lessen the noise without losing the details. 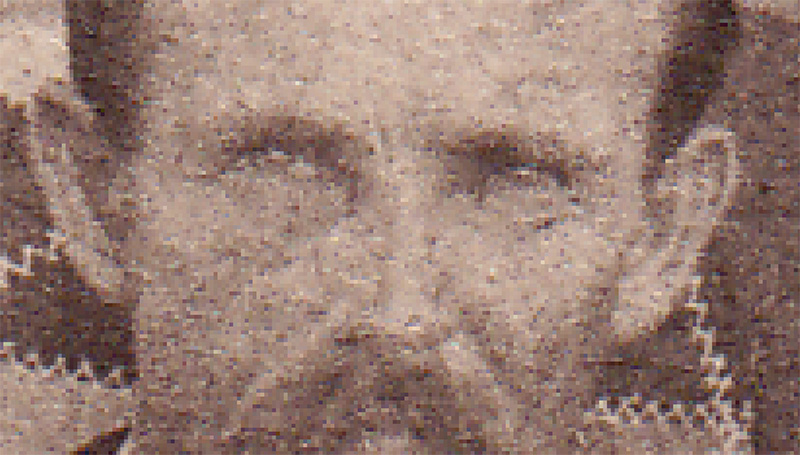 Make a duplicate of your background image (Ctrl +J, PC; Cmd +J, Mac). In the Filter menu, select Noise > Reduce Noise. With noise this bad, it’s best to make this a two step process (at least). I find doing things like this incrementally helps retain control over how much detail is kept and lost. While the preview pane to the left in the dialog box is a nice large size that really allows you to see what you’re doing, you’ll still want to have your original document zoomed in at a fairly high percentage (200 – 300%) and move the dialog box to a place where you can see the effect your changes are having on your photo. Move the sliders each way, independently and in conjunction with one another and determine the best result for that particular photo. You don’t want to try to obliterate all traces of noise, especially on a photo as bad as the example, all in one pass. Remember: the object is to lessen the noise and retain the detail! A blurry glob of goo is not what we’re hoping to achieve, here!

More:  Enhancing Black and White Images with Photoshop and Lightroom 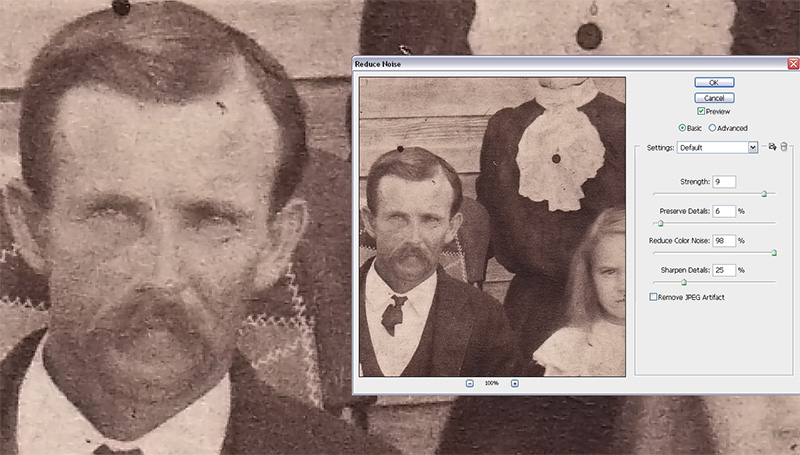 Back in the layer stack, duplicate the layer you just worked on (Ctrl +J, PC; Cmd +J, Mac) and go back to Filter > Noise > Reduce noise. Again, the object is just to lessen, not obliterate! Resign yourself to the fact that there will still be some noise, but it will hopefully be reduced enough that you can take care of most of it using other tools and methods. Once more, play with the sliders and settings watching the results closely. When you start to lose more than a slight amount of definition and detail, back up a little and stop! 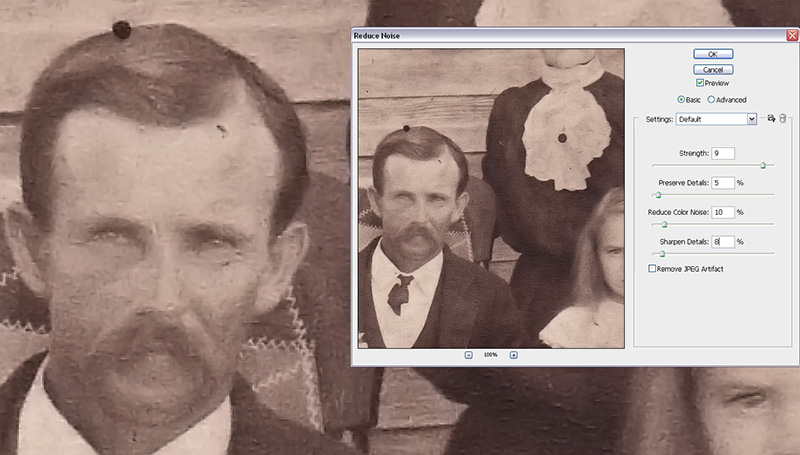 No matter how careful you are you will lose a little of the definition of the picture. The noise is being reduced by blurring the pixels, so there’s no way to get around it. Luckily, you can always utilize a little sharpening to get some detail back, and in my opinion the best way to do that in this sort of situation, and inside Photoshop, is the High Pass filter. First, duplicate the layer you just worked on. This will bring you up to four layers, but it also gives you a great visual trail to follow and see how far you’ve come from the original! Once again, go to the Filter menu, then Other > High Pass. Adjust the slider where you see some detail coming back into the image. It’s a good idea to focus the preview on an important area, like an eye for instance, so you can get an idea of how it will look. Be careful not to over sharpen, leaving a lot of jagged edges. 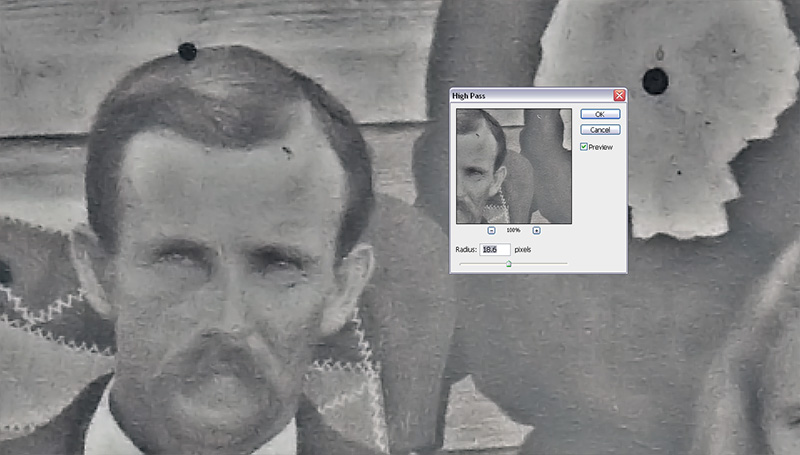 Back in the layer stack, change the layer blend mode of the layer to Soft Light. If you wish, go through all the blend modes to see if another would work better for you and the photo you’re working on. I’ve found that nine times out of ten, Soft Light works for me, but it’s always a good idea to be familiar with the changes the blend modes make. 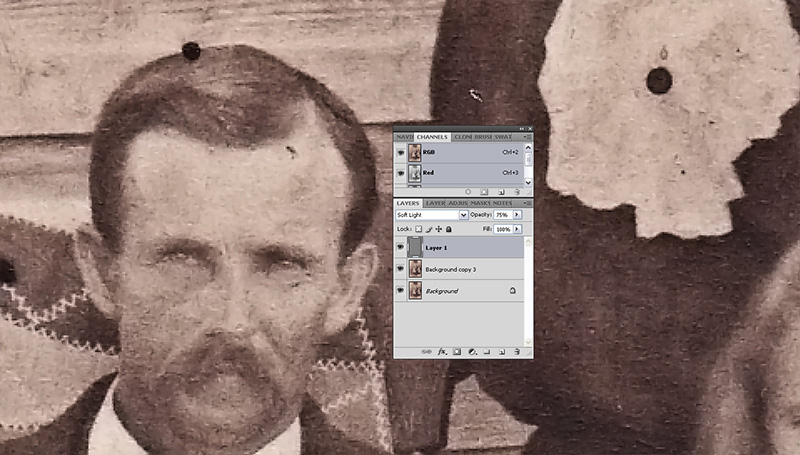 Now, to soften the harshness of the sharpening, without undoing all the work you’ve just done, use a slight, emphasis on slight, Gaussian blur. Duplicate all the layers into one (Shift + Ctrl + Alt + E or Shift +Cmd + Opt + E on a Mac) layer. Go to Filter > Blur > Gaussian Blur and adjust the slider as low as you can and still see a blur. I used a Radius of 0.4 pixels. Like I said, “slight”. 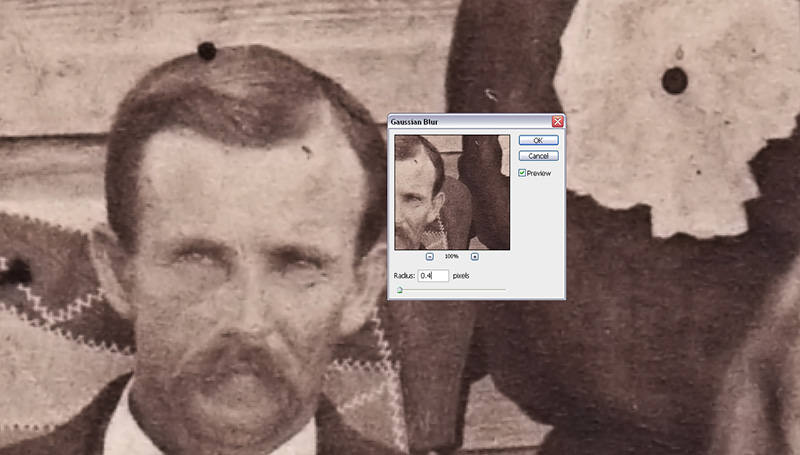 Back in the layer stack, I used an adjustment mask to bring any key elements back into sharp focus, in this case only the eyes. 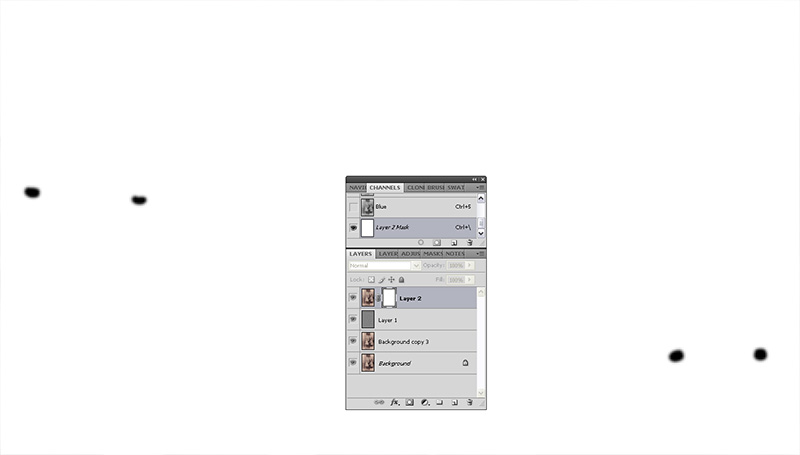 Are the results perfect? No. Is there still a lot of good, hard work to do? Definitely! The plug-ins might even be preferable if you have a lot of photos with a lot of noise, but for just a few random noisy images, the built in noise reduction filter in Photoshop can be made to work for you! 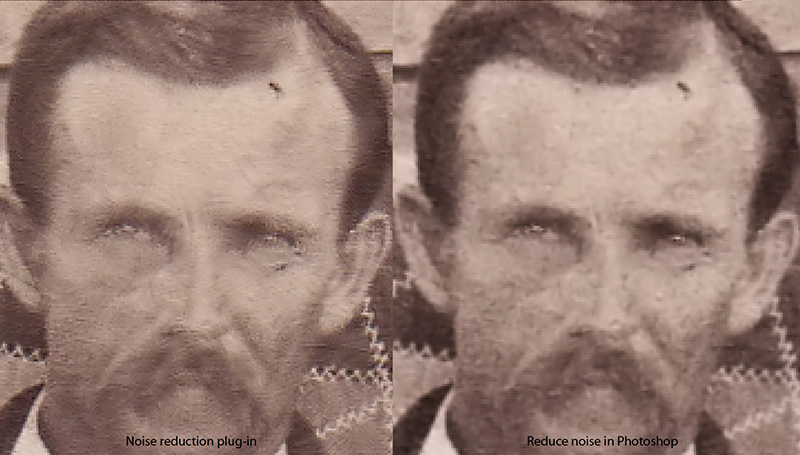 Next week, same photo, we’ll work on bringing the little boy on the left (in the original, top) back from the fade!