I’ve spent the last few months working with the Epson Perfection V700 Photo (V700), courtesy of the wonderful folks at Epson, and am finally ready (I think!) to share my opinion of this marvel of scanning goodness! 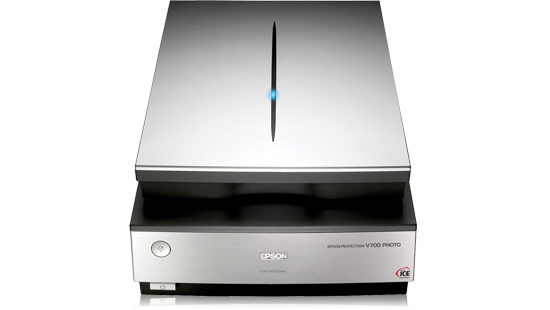 I’ll start off by saying there are a lot of scanners out there, some for less than the V700’s $530.00 to $600.00 price range, that will do a wonderful job scanning photos. Some will do better than others, of course, but if all you’re going to do is scan a few photos once in a while, and you’re not really interested in getting the best quality scan absolutely possible to restore or archive your photos digitally, you’ll probably want to shop around for a less expensive model. If, however, you have a lot of negatives, slides and film in your family collection, this is where the Epson Perfection V700 Photo really shines! 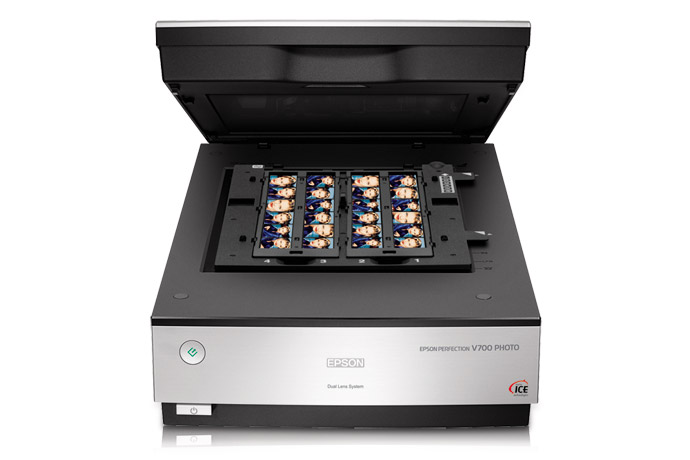 Most scanners that retail for less than $600 are useless for anyone who has slides or negatives larger than the normal 35mm (mounted and un-mounted) / 120 sizes, including 4×5 or 8×10 negatives, or 128 Super Size slides among other sizes. If the transparency adapter is built into the lid of the scanner, as opposed to having removable film mounts, it’s even more limited. 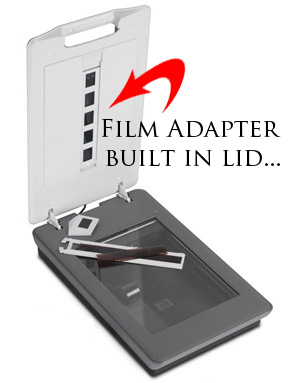 The V700 has film mounts for 35 mm mounted slides (12 frames), 35 mm film strips (24 frames), Medium format strips 2 1/4″, 120 / 220, 6×20 cm (2 – 6 frames), 4″ x 5″ film (2 frames), and  an 8″ x 10″ film area guide, which makes it the most versatile film scanner for the money, period! But what if you do have tons of negatives or masses of film to scan? Wouldn’t it be a lot more economical to send your negs away to be scanned? Sure! If you like taking a chance on never seeing them again! Let’s face it, no matter what anyone says, by sending your original photos, film and negatives through the mail, you are taking a chance that they will be lost or damaged! There is not, nor will there ever be, a 100% chance that they won’t be – chances are they won’t, but all it takes is one time and they’re gone! That’s not a chance I’m prepared to take, nor will I ever recommend it, no matter how cheap or good the service! 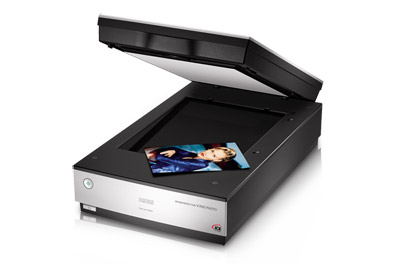 But, lest you think negs are all the V700 can do, let’s look at some of the other features it has to offer…

The V700 has a scanning resolution of 6,400 pixels per inch, significantly better than the normal 4,800. The example below (click it to enlarge)is the same photo, zoomed in 400%, scanned at 300 dpi on two different scanners. The V700, on the left is much clearer and less pixelated while the scanner on the right, a much lower priced (non-Epson) model, is of quite a bit lesser quality.

Adjustment choices are important in a scanner, at least for me, a self-admitted control freak. I like to choose not only my resolution rate or whether I want to scan in black and white or color, but also my bit-depth, whether I want to just remove some dust, or make no color or tonal adjustments at all. For my line of work, it’s crucial to get a scan as close to the original photo as possible, therefore I turn off all of the color and tonal corrections when I scan. Going back to the example, above, both made with all adjustments turned off, you can see the lower priced model scanned the photo in a stunning orangey tone. The V700 scan is the tone of the original.

The V700 has four different scanning modes to choose from. The Full Auto Mode is a bit like a point and shoot camera, the scanner chooses all the settings for you, Home Mode lets you adjust the basic image settings, Office Mode is mainly for scanning documents and Professional Mode gives you the option of the most adjustments for the greatest control over the scanning process.

The V700 has a lot of included software, including a lite version of LaserSoft Silverfast, which gives you still more control over things like color and tonal adjustments, and supports the V700’s Digital ICE technology. There’s a lot of buzz about Digital ICE, and many, many people feel it’s the be-all, end-all in in-scanner photo restoration. I don’t use Digital ICE, or Silverfast, for the same reason I don’t use the basic  color and tonal corrections built-in any scanner (my need to have an accurate before image, but also because I don’t think it works very well. This is just my opinion, of course, but nothing beats hands on photo restoration done by a skilled professional.

The scanning speed of the V700 was very good, particularly at 300 dpi, but not too shabby at 600 dpi. A 4×6 photo scanned at 300 dpi was scanned in seconds. This may not seem earth shattering to some of you, but I’ve had (and have) quite a few scanners, including one more expensive than the V700, and it takes roughly twice as long to scan the same photo with no discernible difference in quality. For the record, this more expensive scanner has been retired in favor of the V700!

I’ve had quite a few people who are thinking of going into the restoration business ask me to recommend a scanner and the Epson Perfection V700 Photo is my one and only recommendation! There are many scanners out there that are less expensive than the V700, but if you’re looking for the best possible scan and the most versatile in terms of film/negative sizes, the V700 is, hands down the best scanner to be had for under $600, period, and better, even, than some more expensive models.