Last week we went over noise reduction, sans plug-in. This week, using the same photo provided, with thanks, by Kelly (Herstoryan), we’ll bring back an extremely faded element.

In the example shown, the little boy on the left is fading almost completely away, including his face, yet you can still see clearly where his eyes, nose and mouth are. In a case like this there are two ways to tackle these features, the really, honest-to-goodness, completely correct way, which is to build all the facial features back up exactly as they are in the photo, a time consuming, detail intensive job, and the sort-of-cheating-but-not-really-cause-it’s-family-after-all way.

Let me say that if this was a paid restoration I’d do it the first way and it would take a long time and would still need some composite work, which I’d also take from the other subjects in the photo, they’d just be placed a little differently, but for the sake of this tutorial, we’re going to change the angle of the little boys head, just a bit. First, though, lets bring him back from the fade! 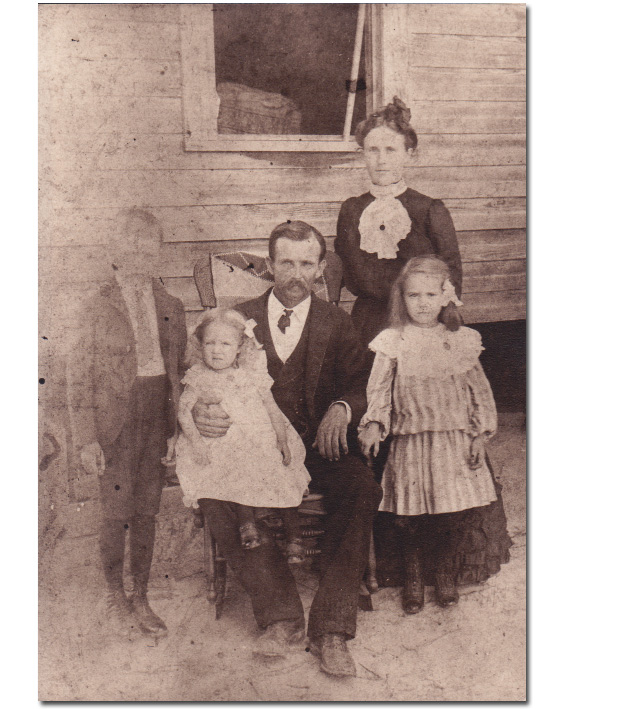 The object, here, is to darken the faded area while leaving the rest of the photo alone. To that end, the first thing we’ll do is a Levels Adjustment Layer. Even if you have a version of Photoshop, or another program altogether, that doesn’t have adjustment layers, you’ll need to make one by duplicating the previous layer (Ctrl or Cmd + J). In the Levels dialog, bring the black slider on the left, for the dark, or shadow, values, over to where the main peaks begin in the histogram.

More:  5 Awesome Icon Buttons You Might Not Know About In Photoshop 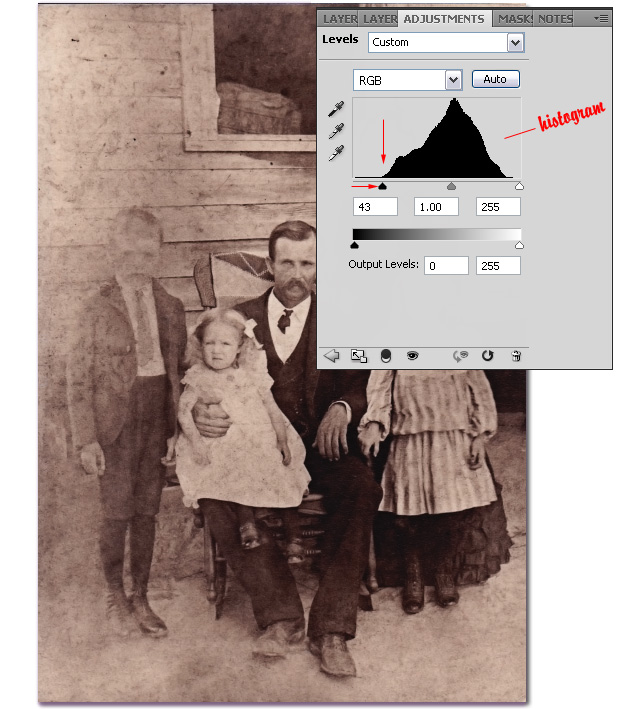 If you don’t have adjustment layers, add a layer mask to your layer, now.

With your foreground color set to black, select the gradient tool. 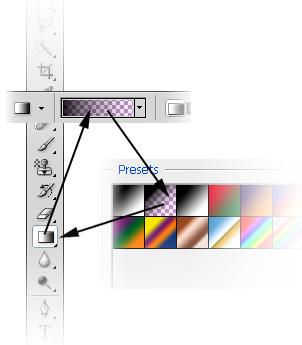 On the layer mask, bring the gradient from the right to the left, as in the example, below. The black in a layer mask is transparent, letting the image beneath show through, the white is opaque, leaving the levels adjustment show, and the gradient allows a smooth transition between the two. 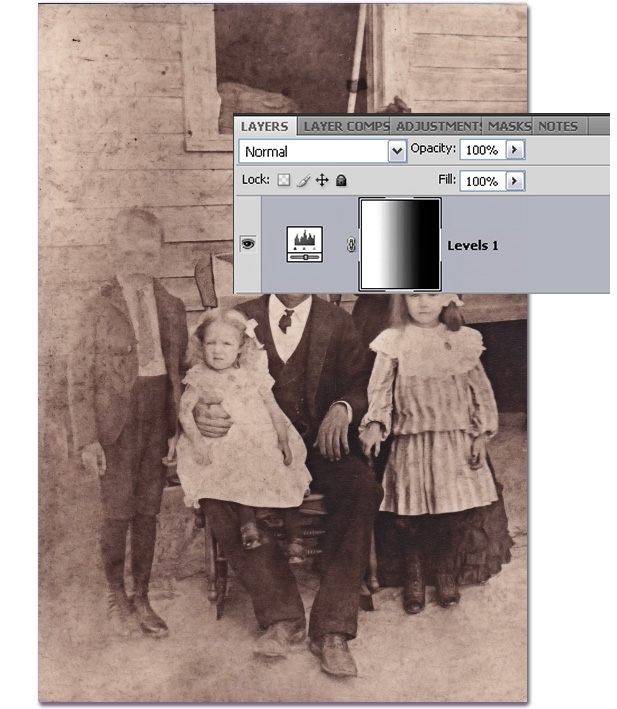 As with most repairs of this nature, it’s better, to do them in small steps. The next step is a Curves Adjustment. Move the Input/Output line down, slightly, towards the lower right hand corner. I don’t go too far in any one step because I find it easier to keep it looking natural if it’s done on multiple layers. Back in the layer stack, with the mask active, invert the color of the mask to black (Ctrl or Cmd + I). Paint the areas you want darker in white, in this case, the little boy. I’m not worrying about the background in this step, just the boy. 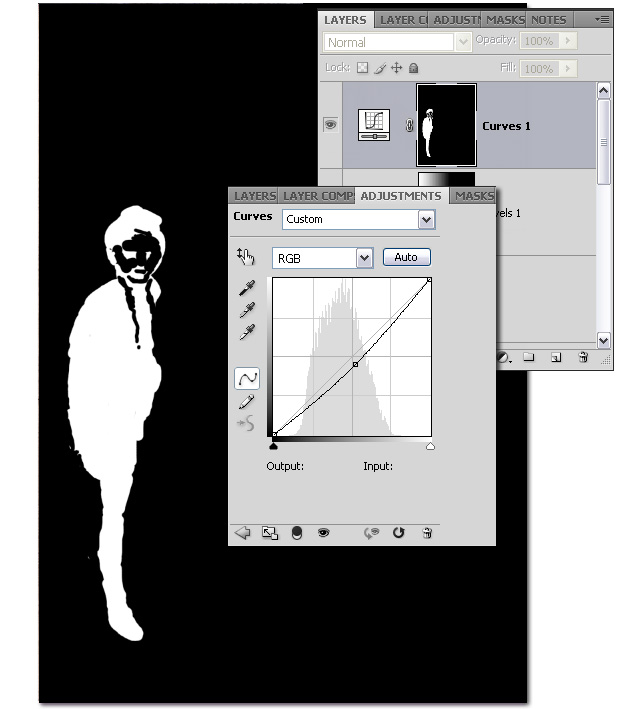 Now for, in my opinion, the key to successful masking of this sort, a slight Gaussian Blur to blend. 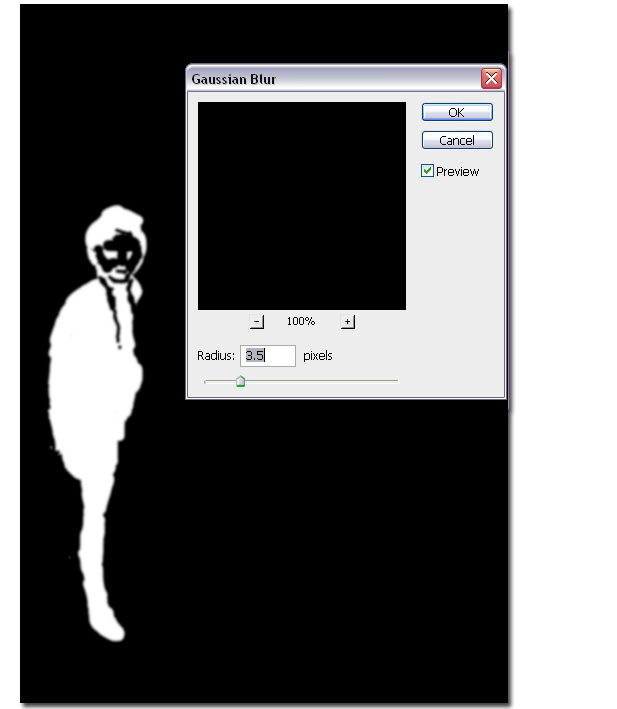 Lower the opacity until the blend is seamless. Continue the curves adjustments until the tones more closely match the rest of the photo. I ended up doing six curves adjustments. You’ll end up masking out less and less of the area with each pass, as some of the tones will match earlier than others. In other words, don’t just use the same areas for each adjustment!

More:  Into The Fade

Now we’re going to work on the faded background area. The area on the right is so good, we’re just going to borrow it! Select a nice clean area and move it over to the faded side. It will take some transforming (Tranform > Distort) to get the boards to all match and stretched to fit the area, but it’ll be a much nicer finished look in the end. 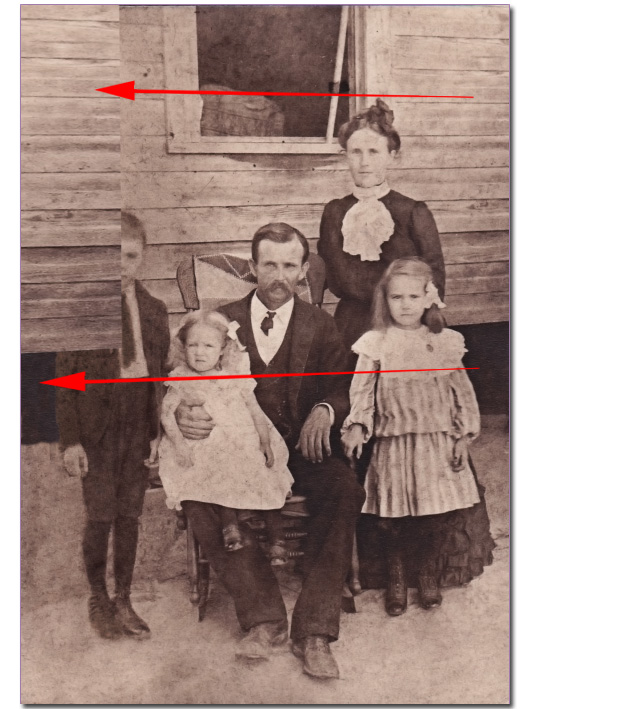 To blend, change the Layer Blend Mode to Darken and work around the edge with a very low opacity eraser tool – I’m talking way down around 10% low! Lower the opacity of the borrowed layer to around 70% or until the blend is seamless. You may need to tweak it, even going back to the previous step if you need to select a larger area so you have more blending room, but it’ll be worth it! 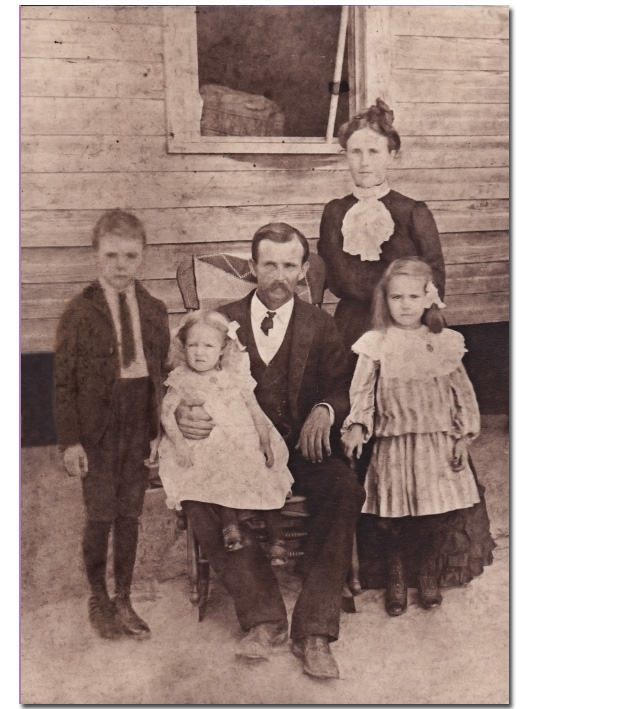 Now we’re going to do a little medical procedure. As I said in the beginning, the little boys face can be brought back enough that you could look from the before and after and not see any shift at all, in other words, all the elements will be exactly where they are in the original. With a lot of time, patience and care, it can look very good, too. But for the sake of time and sanity, both yours and mine, we’ll take a little short cut. For this demonstration, we’ll be performing a face transplant. Yes, we’re going to borrow one of his sisters faces for the sake of time. I’d normally use his families features, at any rate, to reconstruct his face, so this is just a little cheat. Select a good candidate for the area you want to composite, be it a face, an eye or whatever, and put it on it’s own layer (Ctrl or Cmd +J), and move it to the element it’s to replace. 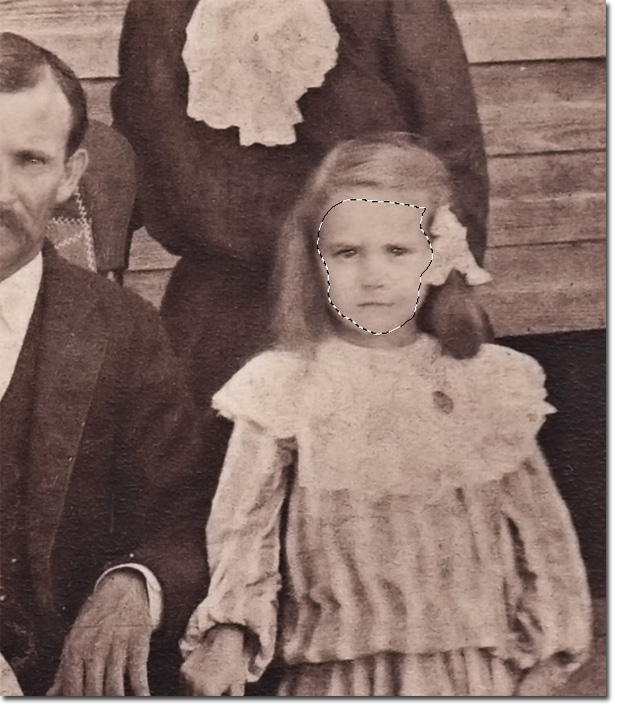 In this case, the direction the boy is looking is basically the opposite of the little girl, so go to Edit > Transform and select Flip Horizontal. In the case of faces, eyes or anything else that needs to be lined up with like elements, lower the opacity a bit, select Transform (Ctrl or Cmd +T) and adjust appropriately. 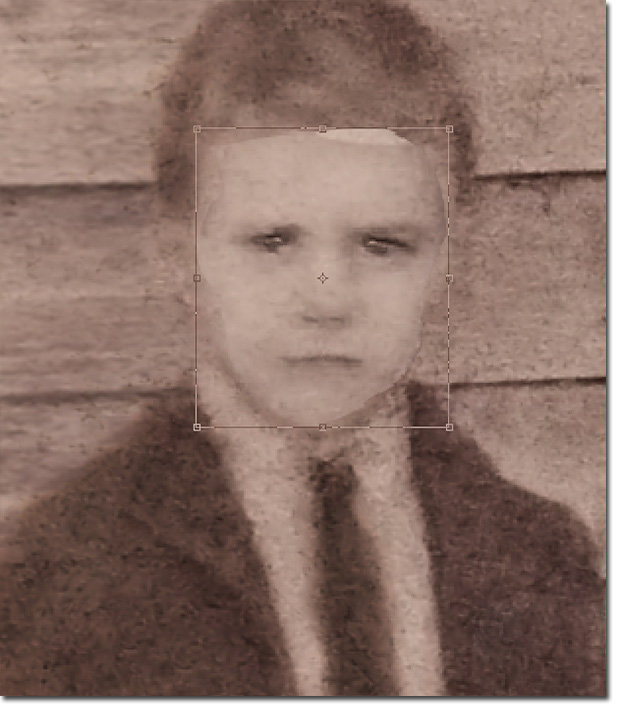 Nibble away the edges with a low opacity eraser and adjust the opacity to blend. The result is a bit more “real”, now. 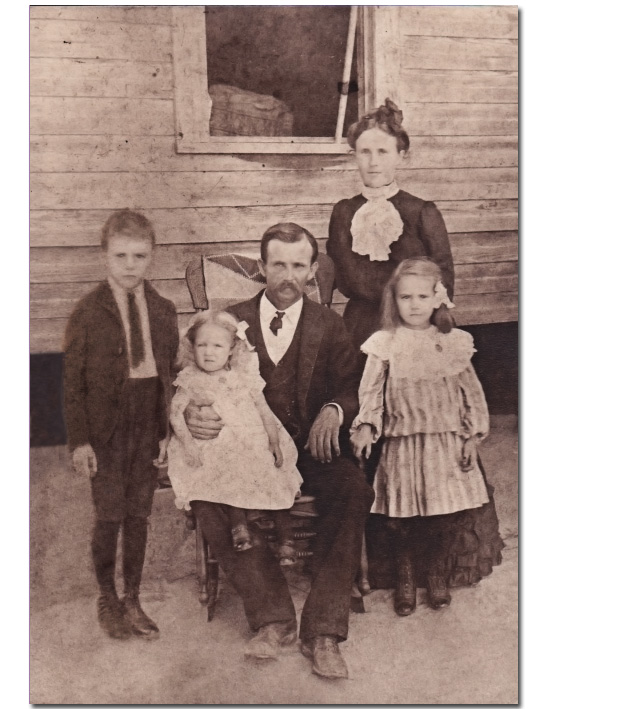 I continued with the normal restoration methods, clone, patch and healing brush tools, plus did a couple more Curves adjustment layers to whiten the shirt fronts, lace and the little girls dress. I also worked a bit on sharpening the little boys face. One more thing: since he’s now looking directly at the camera, I filled out his face on the right side. 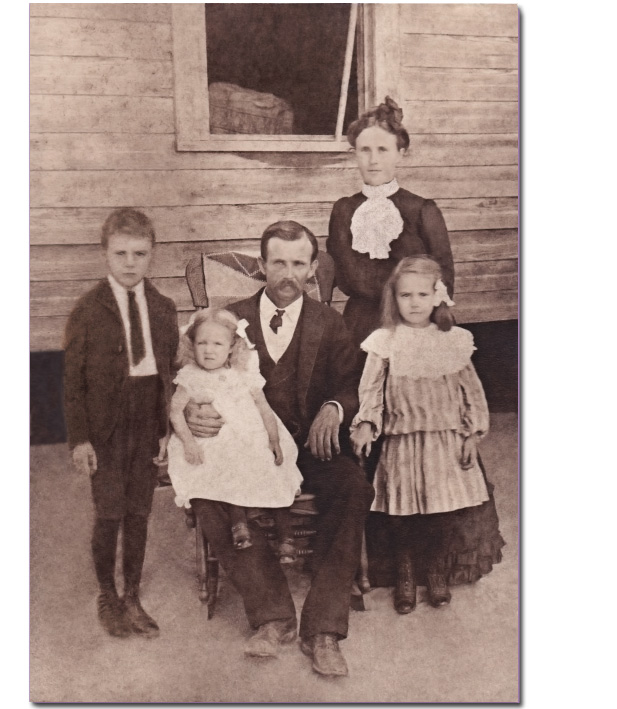 There’s always more than one way to do any restoration work, and a face transplant is just one. While I normally don’t advocate something like this unless a face is completely obliterated, if done carefully it can be an alternative for the casual restorationist!

4 Comments on Restoring A Partial Fade