The Overlay blend mode in Photoshop is typically used to enhance contrast, making the shadows darker and the highlights brighter. Last week, we looked at a method for using the High Pass Filter in Photoshop to sharpen an image, using the layer blend mode of Overlay. Today, we’ll look at a way to use virtually the same technique, but this time to smooth an image by actually reducing the contrast in specific areas of the image.

We’ll start with this portrait from stock.xchg. The lighting has conspired against us, and as a result, the lines under the subject’s eyes, especially her right eye, and a little too noticeable and distracting. 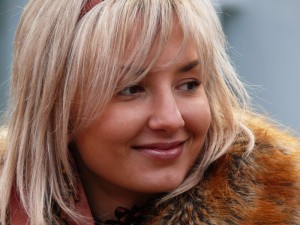 Our objective with this tip will be to minimize the distraction, but without resorting to the more drastic measures of cloning or blurring, which can produce an overly artificial look. Instead, we’ll bring Overlay mode to the rescue, and de-emphasize the lines by reducing the contrast – by making the shadows less dark, and the highlights less bright. In short, the opposite effect we used for our High Pass Sharpening technique.

Here’s what we’ll do: start by duplicating the background layer (press Ctrl-J/Cmd-J, or simply drag the layer thumbnail in the layers panel to the “create new layer” icon). Rename this new layer “High Pass Soften.”

Next let’s run the High Pass filter on this image. Select Filter > Other > High Pass… to bring up the filter dialog. There is only one setting, “Radius.” For this technique, we’ll want to use a little higher setting than usual, and back off later by reducing the opacity. For web resolution images, you’ll want a value between 5 and 15, for typical camera images a value from 10 to 30. I chose 20 in this case:

Press OK to commit the change. Before we set this layer’s blend mode to Overlay, I recommend desaturating the image. This will remove any color artifacts from this High Pass Layer, and prevent any color shifts to the skin tone when we use Overlay mode, and will also make it easier to see what is happening in the next steps.

Now, we don’t want sharpening, we want smoothing. Instead of enhancing contrast, we want to reduce contrast. We want the complete opposite effect. We can achieve this now, by inverting the High Pass layer. When we invert a black and white image, black becomes white, white becomes black, shadows and highlights are reversed, and – 50% gray remains unchanged!

Note the difference in the image. The edges that were enhanced by the High Pass filter now have a negative look, but the overall 50% gray of the image is intact.

Let’s go ahead and set this layer’s blend mode to Overlay. You should see an immediate softness in the image. Hold the Alt (Option) key down while pressing the “Add a layer Mask” icon in the layers panel, to create a new black layer mask that hides the entire layer:

Now, with a soft round brush set to white, with a low opacity (20%), paint on the layer mask to reveal the areas we want to soften, such as the lines under the eyes. Remember that multiple passes of the brush add density, and build up the opacity gradually from 20% to 100% as you continue adding brush strokes:

After painting in the softness in the wrinkles, you can adjust the opacity of the layer if desired to fine tune the adjustment. Here is the before and after, with the layer opacity set to 70%:

The difference is subtle! Keep in mind, we are not removing, cloning or blurring away the lines, we are simply reducing their contrast in order to shift the viewer’s attention to more important parts of the image. Once this correction is made, use last week’s High Pass Sharpening technique to add some emphasis on the eyes, and your mission is accomplished! 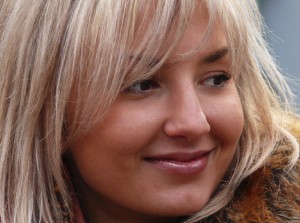 Stay tuned as we continue our exploration of Photoshop’s layer blend modes next week.