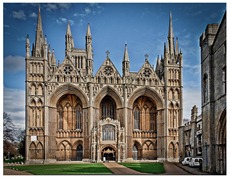 A couple of days ago TipSquirrel.com held its first workshop at the beautiful Peterborough Cathedral. Fortunately the rain held off and most people found their way with little confusion, a good start in my book!

Gavin Hoey and Glyn Dewis kicked off the day by helping the attendees to find and photograph interesting shots around the inside of the cathedral, but most people said that there was too much, in fact the cathedral just had so much to offer the first couple of hours flew by. 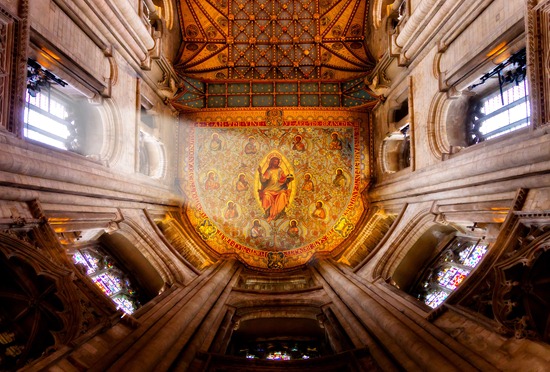 There were some spectacular sights and it was interesting to see how people were tackling the subject. I’m not sure what other visitors made of a group of photographers laying on the floors, crawling through chair legs and taking photos of bricks (textures!) but I know it warmed my heart.

Once we’d found our way around it was off into two groups, one with Glyn for a portrait shoot and one with Gavin to tackle the climb to the top of the cathedral. 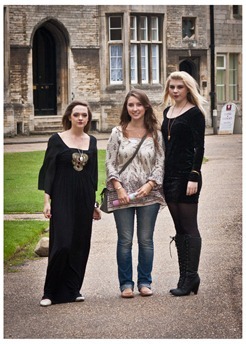 When Glyn decided on the theme of Modern Vampire and Gothic I was a little worried, but I informed the cathedral and I took the fact that they didn’t shout at me as an ok to go ahead. Of course I promised no blood and a great deal of taste, and that’s what Glyn delivered in liaison with Abi Corby and her two models Katie and Sophie.

Abi’s new to the world of photographic make-up only having completed her course recently. She has however already started to build quite a reputation as a very skilled young lady, so we left it in her hands to get the models, outfits and look ready for the day. A daunting time for seasoned pros so well done Abi for taking it all in your stride.

We liaised with her a couple of times and tweaked ideas but it wasn’t until the morning of the shoot that the final look was agreed with her and Glyn. 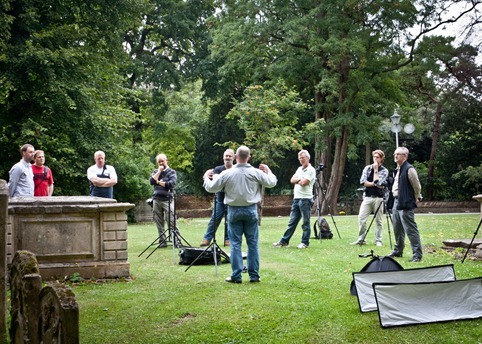 So, it was down to business, with Glyn giving a start to finish on setting up the lights, camera and models for the desired looks. With a pocket full of Pocket Wizards soon the graveyard was awash with the sounds of camera shutters. 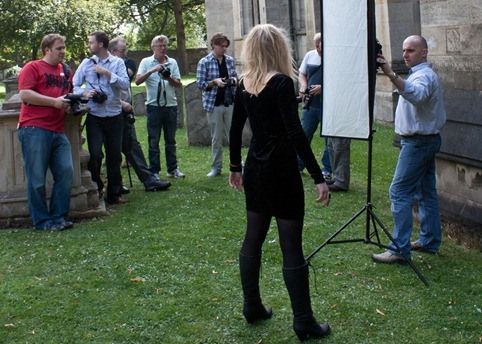 With the premise that we’d be adding moonlight and mist into the finished shot Glyn had some great advise for shutter speeds, apertures and of course how to get the best look from the model. With a tight schedule this was no mean feat and its commendable that we he set up, taught, shot, encouraged and dismantled within the allotted time. 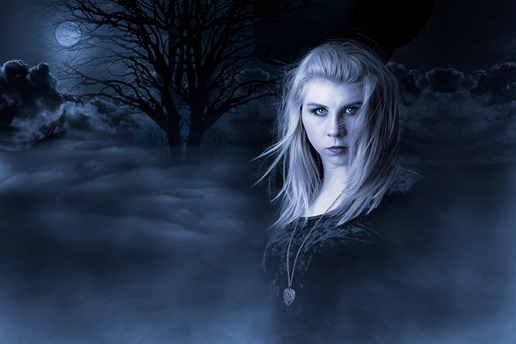 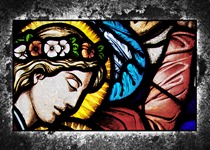 While one group did the portraiture the other joined Gavin Hoey on a trip to the ‘unseen’ area of the cathedral. Anyone that’s seen Gavin’s work and especially his 15 minute Challenge series will know that he has an eye for the details and a sixth sense for finding them.

This tour was a real challenge for photographers so it was great to have Gavin to talk us through how to shoot in the low light that we found ourselves in, and how to visualise the image once we’d got them out of the camera. Getting the image right in camera is of great importance but Gavin talked about textures, panoramas and HDR as well as the use of angles, lines and a whole pile of other techniques.

More:  Changing The Background Colour of a Photo With Photoshop

The tour took us higher and higher up the cathedral following a narrow walkway. It was here that I found my niche in the day. You see, there were some people that were unfit and struggling to climb the stairs or they were terrified of the height we found ourselves at. So I bravely wheezed, sweated and shook like a leaf to allow the attendees to feel better about themselves. Any stories of me squealing like a girl and running between pillars so I couldn’t glimpse the view are probably exaggerated.

We continued over what were hopefully solid boards to the tower. And so here again Gavin was faced with a new area to teach. From the gloom of the inside we now found ourselves in sunlight with, literally, the city before us. 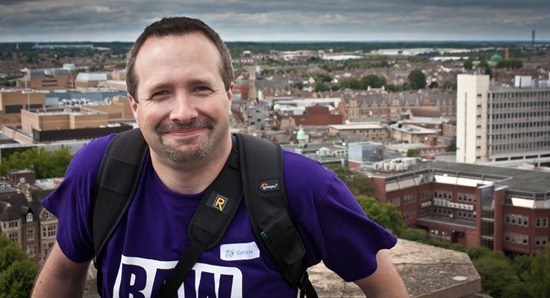 Tired, Worn Out and Time For A Cuppa

We finished the day with some post processing techniques from both Gavin and Glyn, some of which you’ll find in the not too distant future here at TipSquirrel.com.

Looking around the room I saw many people putting their images onto their laptops and from what I saw there was some amazing shots, I can’t wait to see more of them in the Flickr Group.

Finally Gavin had devised a challenge for myself and Glyn, a Who Wants To Be A Millionaire style quiz. Now I don’t want to blow our own trumpets so I wont tell you how close we got to the million, lets just say we won an amount with more than eight zeros in it (some would argue that we really should have done though!)

More:  Colouring your background in Lightroom and Adobe Camera RAW

Thank you to everyone that took park. To Gavin and Glyn for their tuition, Abi for the make-up and wardrobe, Katie and Sophie the models and of course to the attendees, or ‘New Friends’ as they’re now know.