April already and the net is awash with April Fool jokes. I can garantee, there are non in this blog.

After 95 editions of PhotoWalkthrough viewers are treated to a “re-run” of episode 1, why? Because back then you couldn’t keep the episodes so people, and squirrels, that save the tutorials until they need them hadn’t got them.

Now don’t get too excited, remember this is when John was first thinking about doing video podcasting and hasn’t bought the software yet, and so we are treated to a tutorial with a DEMO sticker in the middle. Oddly enough, it doesn’t distract too much from the tutorial that by today’s standards, and I of course include John in that, lacks a little something.

John is extreamly comfortable in the tutorial and explains very clearly, but something just isn’t right. Maybe it is the screen size, so very very small, that means pallets and toolbox have to be kept off the screen so we can see whats going on.

Is it worth a look? Yes very much so, especially as this is the first in a series of 7 and, as always, John details the work from camera to print, something we see in no other podcast. 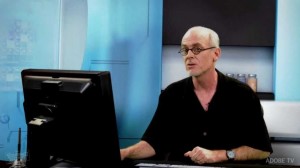 Posted Back In February, but Really Worth a Mention;

The Russell Brown Show – The Secret Life of Color Range

There are two kinds of people in the world, those that like the mad-cap Mr Brown and those that don’t. Whichever camp you fall into you’ll like this though. Russell looses the lab coat and wig but retains the enthusiasm to highlight one of the new features of CS4, the Color Range dialogue box. Yep, we’ve had it previously, but now its polished up and with a cool new feature, Range.

This podcast is now also available at Adobe TV

If you have any links that you think would be beneficial to other visitors, please pass them on.