In the past few weeks on TipSquirrel, I’ve explored some of the new ways to create 3D models with Photoshop CS5, and touched on adding materials to your 3D objects to give them a more photo realistic appearance. Today, we begin exploring the final piece of the 3D puzzle, the technique that lends a sense of realism and believability to your models – lighting. Lights in Photoshop CS5 can take several forms, and can mimic the light from flashlights or spotlights, light bulbs and candles, and even the sun. As we’ll see, there are even some kinds of lights that don’t exist in nature, but can really spice up your 3D scene.

To help us understand lighting, we’ll work today with a very simple 3D model. This is a Repousse object created from white text, on a neutral gray background. If you’d like to see how this model was created, see my earlier tutorial on Repousse. As in my previous lessons, we have the 3D panel (Window > 3D) out and available: 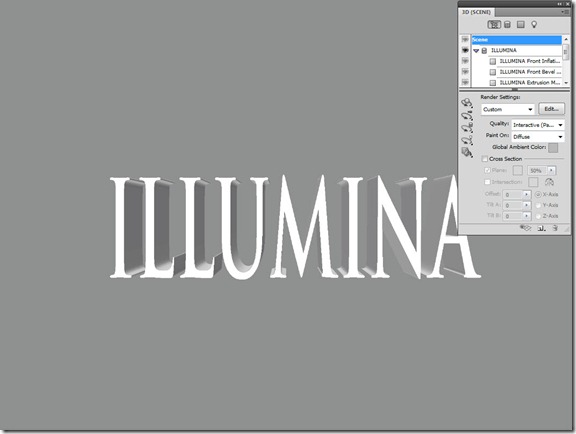 The first type of lighting we will explore is the Global Ambient Color. This is found in the 3D Scene tab of the 3D Panel, and the color we set here will interact with all the objects in our scene, affecting the ambient color of materials we’ve added. Simply click on the color swatch for Global Ambient Color, and you’ll get a color picker. Results are shown immediately, so you can see right away what effect you’re having: 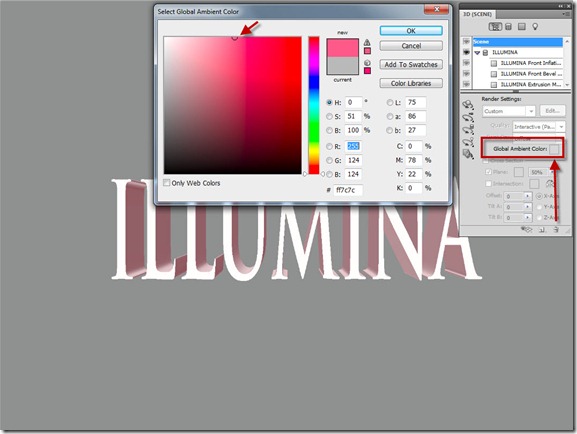 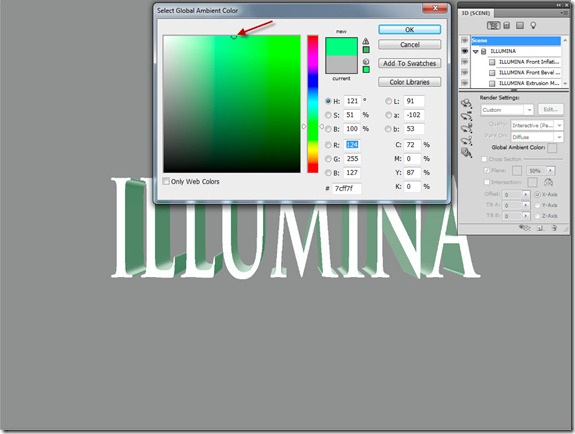 For this demonstration, however, we will click Cancel and leave our model with neutral ambient light.

Next. we’ll look at the types of lights that can be added to a scene. There are four different types of lights we can add, each with its own characteristics and purpose:

When you create a 3D Scene, Photoshop adds some default lights to your scene (otherwise everything would be totally dark. Let’s discuss how we can see the lights that are in our scene, and start to work with them.

We’ll start with the trusty 3D Panel. Click the 4th icon on the top (Filter By: Lights) and then choose any of the 3D tools on the left side of the panel. Once you have a tool selected, the Extras icon at the bottom will become enabled, and you can choose to show 3D Light.

Notice in the upper section of the panel, there are three “Infinite Lights” already in the scene? They are very descriptively named “Infinite Light 1,” “2,” and “3” – don’t be afraid to change the names! Once you have enabled the visibility of the 3D Lights, they appear in the context of the 3D scene. As a sort of round mesh globe with a line extending away in a specific direction – looking sort of like a map pin. The line points in the direction of the light being cast.

Recall that infinite lights don’t have a location, they fall across all objects in the direction of the line. As you can see in the default scene, Photoshop has added three of these lights: one above our scene, one below, and one on camera left, shining across the scene from left to right, slightly from the front. This is appropriate to give our scene a passable – but somewhat boring – lighting: 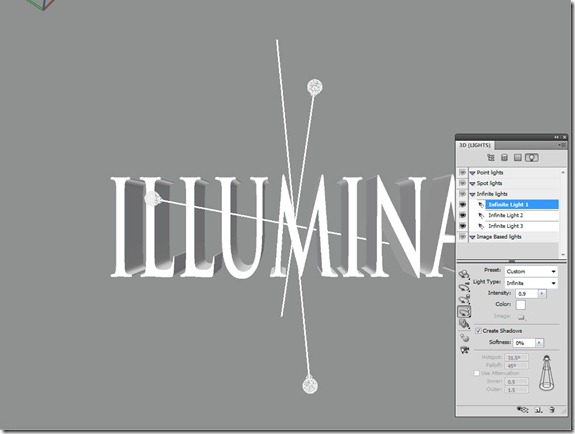 Now that we can see the lights, let’s start working with them. First, notice in the 3D Panel that each light has an eyeball icon next to it, somewhat like the layers panel. These eyeball icons toggle the lights on and off. For example, if we toggle off Infinite Light 1, we get this: 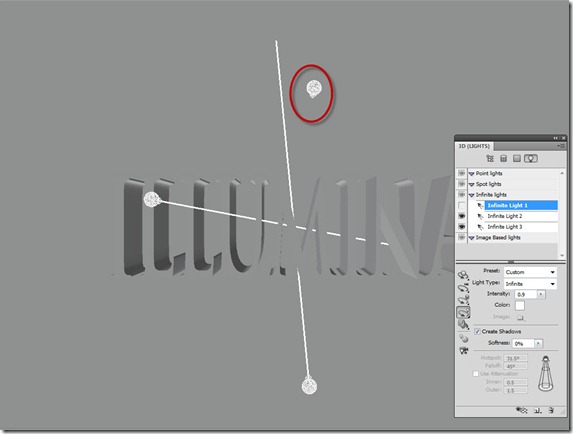 Note that the circled light no longer has the line extending from it. And, notice we’ve lost the primary illumination of the front of our object. Without lights, the object fades into the background.

More:  Rebuilding From (Practically) Nothing

Now, let’s turn the light back on and change its color and intensity. We can click on the Color swatch in the light property section and get the color picker. We’ll choose a red color, and increase the intensity to 1.5 while we’re at it: 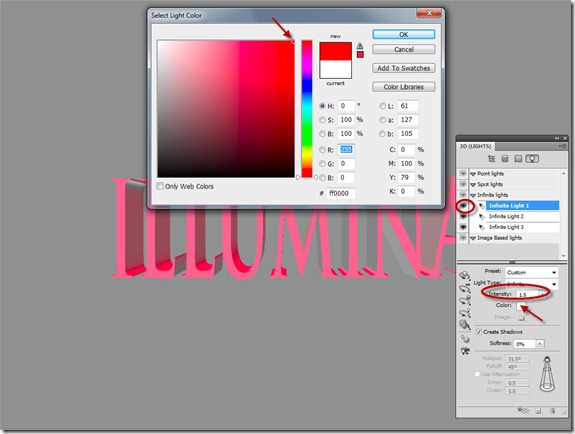 Now let’s select Infinite Light 2 (the light coming from the bottom), and change the intensity to 0.8, and the color to yellow. Note how the lights are starting to interact: 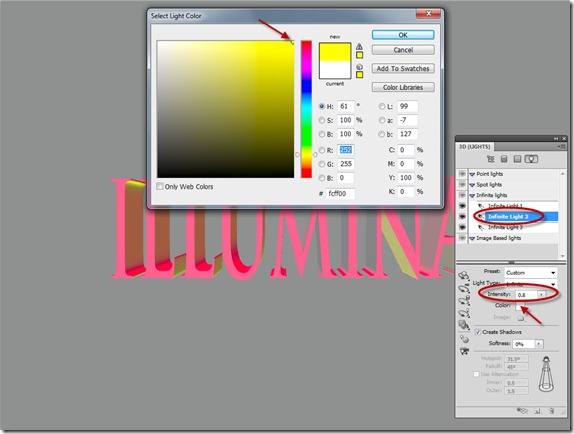 Finally, let’s select Infinite Light 3 (the one shining from left to right) and change its intensity to 0.5, and color to a cyan color: 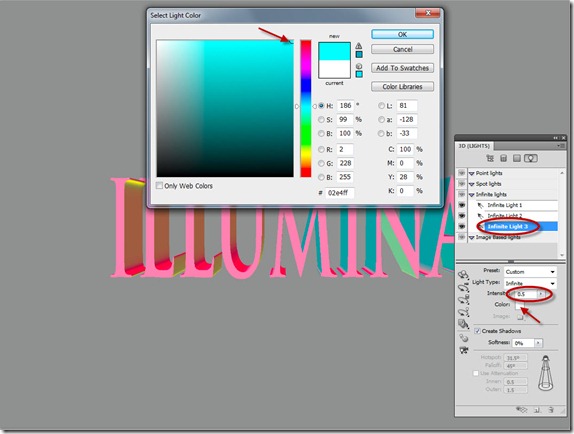 Notice how the lights indicate the color of light in their directional lines. Each light now has a different color line showing the light direction, and the light being cast on the 3D model is now showing this as well: 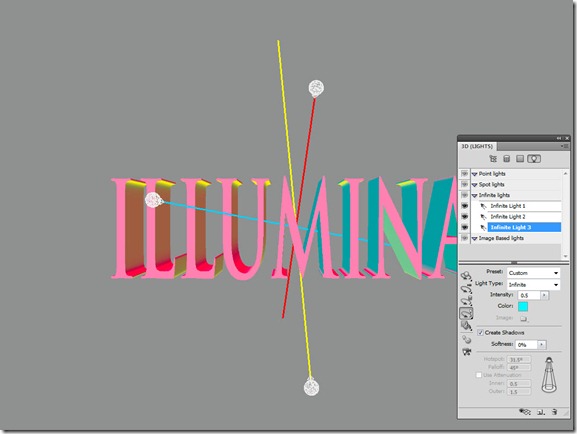 Now, notice one thing further in the 3D panel: Each light has a checkbox which, when checked, allows it to Cast Shadows. There is also a property for Softness, where 0% casts a very hard-edged shadow, and increasing the softness makes for a softer, fuzzier, gentler shadow. However, the shadow must be cast on something, and right now all we have is a bunch of 3D letters. Not to worry! Photoshop CS5 has a nice new feature that allows our objects to cast shadows on the ground as well. Simply choose 3D > Ground Plane Shadow Catcher and the shadows will appear on an artificial ground surface, even though none exists. 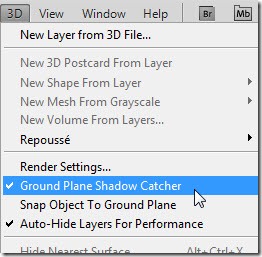 With the Ground Plane Shadow Catcher checked, go back to the 3D Panel and choose the first icon at the top (Filter By: Whole Scene) and in the panel, change Quality from “Interactive” to “Ray Trace Final.” The scene will start rendering, as evidenced by the moving tiles that traverse the screen: 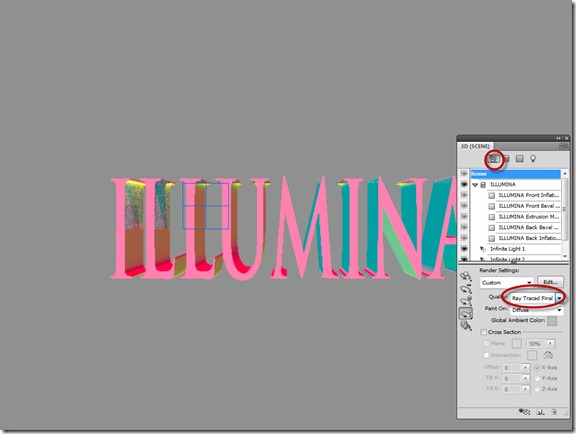 Rendering may take awhile; but you’ll quickly see that although we are getting some shadows and some interplay in the colors, the results just aren’t that interesting. The shadows from the light above are straight down, and there isn’t a lot of drama:

Back in the 3D Panel, first change Quality back to “Interactive.”

Then, click the last icon to filter by lights again, and for each light, change the Light Type from “Infinite” to “Spot.” As you change, notice that the lights’ appearance changes to a conical spot light shape indicating the direction of the spot: 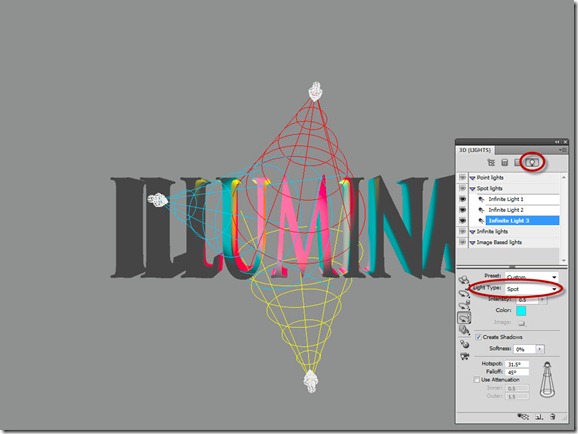 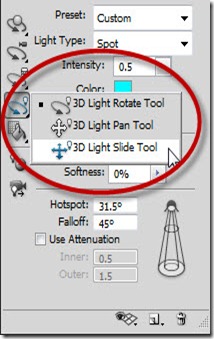 Now we have to start moving the spotlights around. This will take some practice, so be patient and experiment.

Select one of the light movement tools in the 3D Panel. There are three controls:

Again, you’ll have to experiment with these controls to get a better feel for how they work. 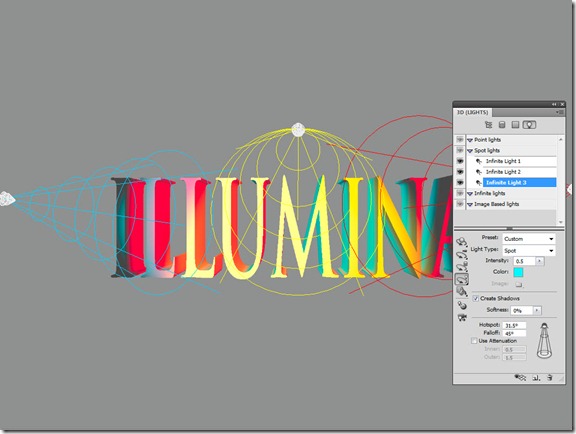 To finish this off, we will want to open up the light on the left so it covers a wider area. This can be done by adjusting the Hotspot (the width of the brightest center of the light) and the Falloff (the area around the Hotspot where the light gradually dims). Let’s change the blue light to have a Hotspot of 45° and a falloff of 75°. While we’re at it, we can change the softness to 50% on both red and blue lights to cast a more subtle, diffuse shadow: 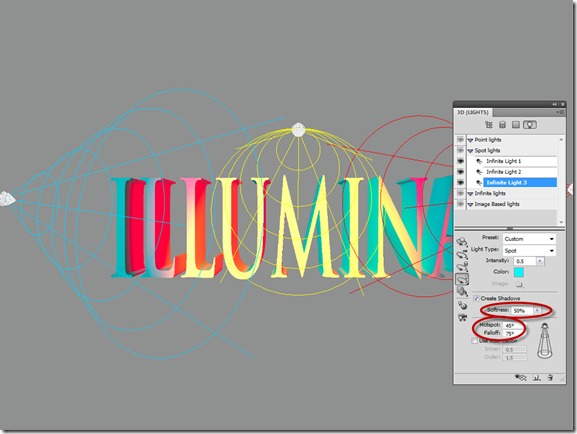 With that change, we’re ready to render again and see how we’ve done. Click the top left icon again to Filter By: Whole Scene, and again change the Quality back to “Ray Trace Final.” The final render may take awhile, and any keystroke or mouse click will interrupt the render. You can pick up where you left off by choosing 3D > Resume Progressive Render. 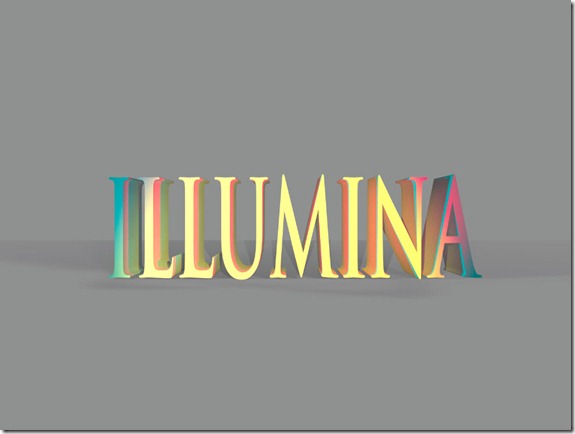 Now, you’ve seen some examples of how lights can be used in a 3D scene in Photoshop CS5. Next week, we’ll put all these concepts to work in creating a scene that includes textures, spot lights, and a point light. Meanwhile, build yourself a 3D scene, and practice lighting it!

3 Comments on Lighting a 3D Model in Photoshop CS5