To begin with it’s wise to collect a good source image of a magnifying glass which I did via http://commons.wikimedia.org/wiki/File:Magnifying_glass.jpg, this is Wikimedia Commons which is a Creative Commons resource for images. The Creative Commons license allows the user to freely use an image in their own work as long as credit is given to the original Author of that image, so, many thanks to Tomomarusan for this high resolution image.

You could choose to create your own magnifying glass within Photoshop if you feel particularly creative but a good quality photo will provide some nice specular highlights and colours and add realism to the final image, especially as in this case the Magnifying Glass was photographed on a plain white background which helps us later.

NB: I’m using a PC so I’ll be using the PC’s shortcut, but for reference where I say [CTRL] substitute [CMD] if using a MAC, and for [ALT] use the [OPTION] key on the MAC. 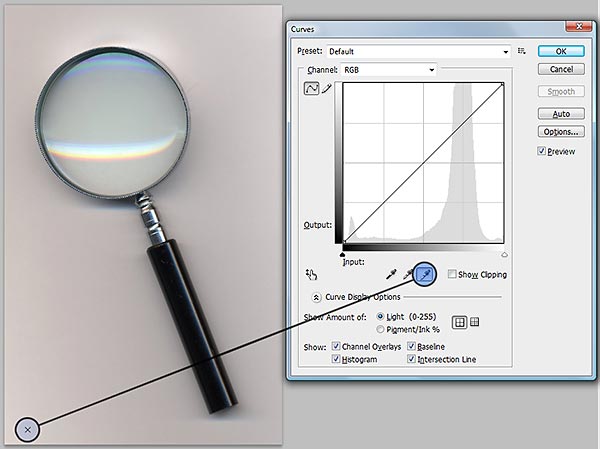 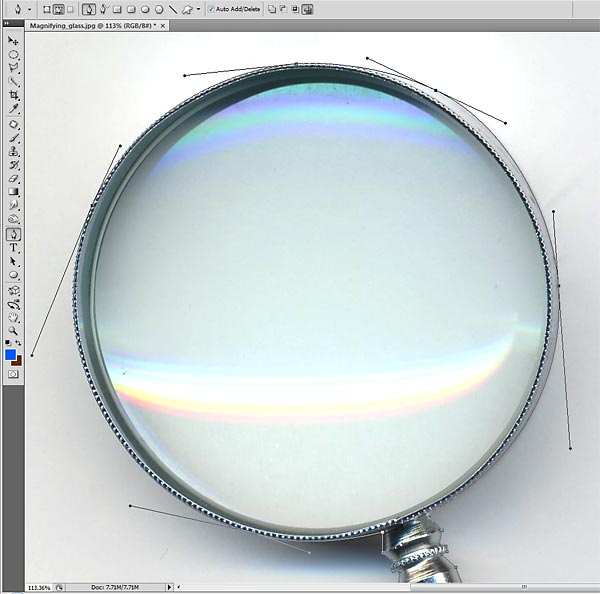 Open up the image that you wish to use as your background image and Paste [CTRL]+[V] the Magnifying Glass into a new layer above your chosen image and resize to fit accordingly using the Free Transform tool [CTRL]+[T].

My background layer was created using a text layer on a simulated paper texture layer and some Dodge and Burn to create the look of folded paper and merged to one layer. Text is good for this exercise as it has good contrast so will look good when the magnifying glass passes over it, but any background image you chose should be fine.

The first thing we need to do is to double click on the background layer in the Layer Palette and rename the layer “Original” – the name is only important for differentiating between the layers, you can choose any name you like. 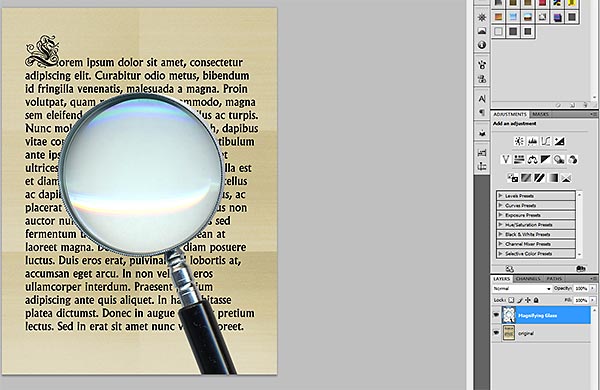 NB: It’s important this magnified layer is created as a Background otherwise the effect won’t work.

The next step is to select the Magnifying Glass layer (name this layer appropriately if you haven’t done so already) and select Layer>New>Group… and call the group something appropriate like “Magnifying Glass” – this puts the magnifying glass into a separate group where we can work upon the elements that make up this effect – it’s not entirely necessary for it to be in its own group but it’s good practice and is also helpful if you want to move all the elements of the group together to either position your magnifying glass for the final image or if you wish to animate this effect.

Select the Magnifying Glass layer and using the Pen Tool [P] make a path on only the lens part of the glass being careful not to include any part of the rim of the glass in the path as we don’t want anything showing through what should be opaque. 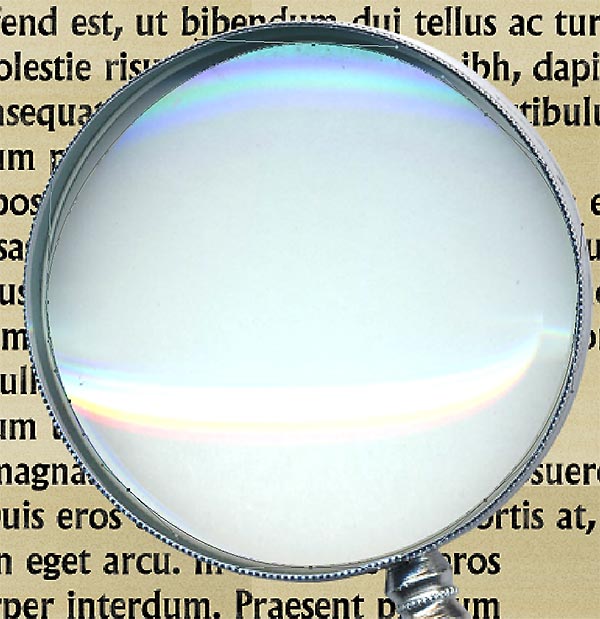 Once you have made your Path press [CTRL]+[ENTER] on the keyboard to convert the path to a selection and [SHIFT]+ [CTRL]+ [J] to cut the selected lens from the magnifying glass into a new layer above. Name this layer “Lens” and [CTRL]+[J] to make a copy of it calling this layer “Knockout”. Move the Knockout layer to the bottom of the Magnifying Glass group. 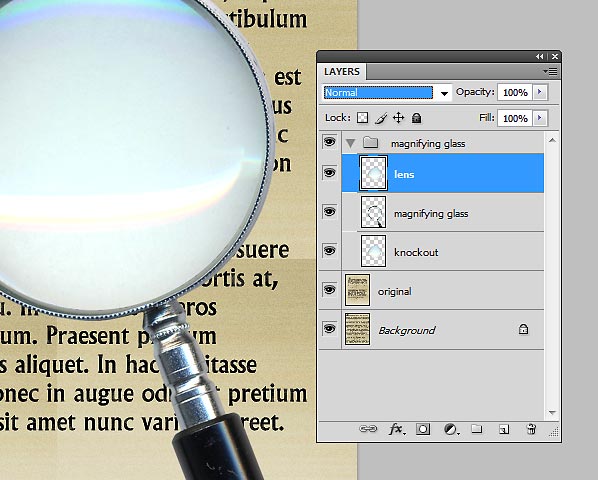 Now we have all the elements in place to make the effect work.

Select the Lens Layer and change the Blending Mode to Multiply – this will take out all the lighter pixels leaving just the darker ones to sell the lens effect in the finished image.

Select the Knockout Layer and select Layer>Layer Style>Blending Options… to bring up the Layer Style dialogue box; in the Advanced Blending area find the drop-down menu called Knockout: and select the option Deep and then click OK to close the dialogue box. 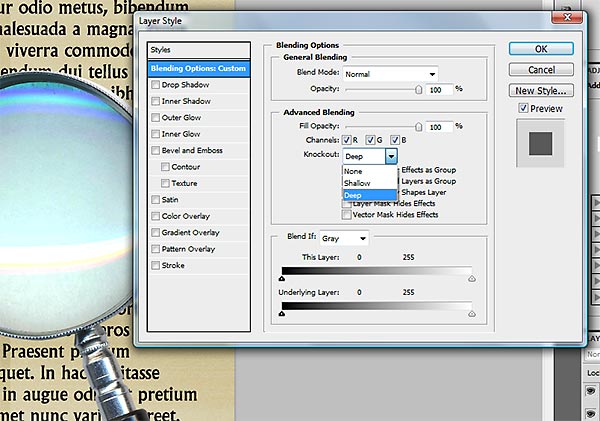 What Knockout: does is to use the opaque pixels of the selected layer to punch a hole through layers directly below the Knockout layer. Shallow : affects only the layers within the same group as the knockout layer, Deep : affects all layers and groups except the Background layer – which is why it’s important it have a Background layer else the effect will punch through all the layers.

What you will have noticed is that nothing special happened but don’t worry this is just because the Knockout layer contains opaque pixels.

Now you’re worried! “Didn’t she just say that the Knockout Effect works upon the Opaque Pixels of the Layer?!”

Yes it’s true while the opaque pixels of the layer create the Knockout effect we obviously cannot see through opaque pixels so therefore cannot see the Background layer! But don’t panic all that needs to be done is to use the Fill slider on the Layer Palette and slide it down to 0% – what this does is affect only the pixels data and not any effects attributed to the layer so the Knockout effect will still work and now we can see the Background layer through the lens and the magnify effect can be seen for the first time. 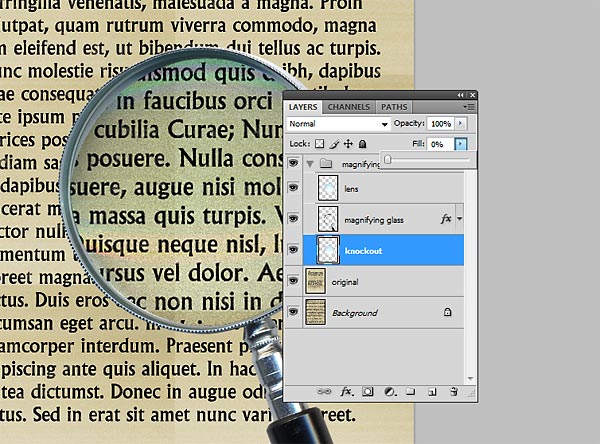 Another thing you can do to add realism is add a Drop Shadow: Layer>Layer Style>Drop Shadow… 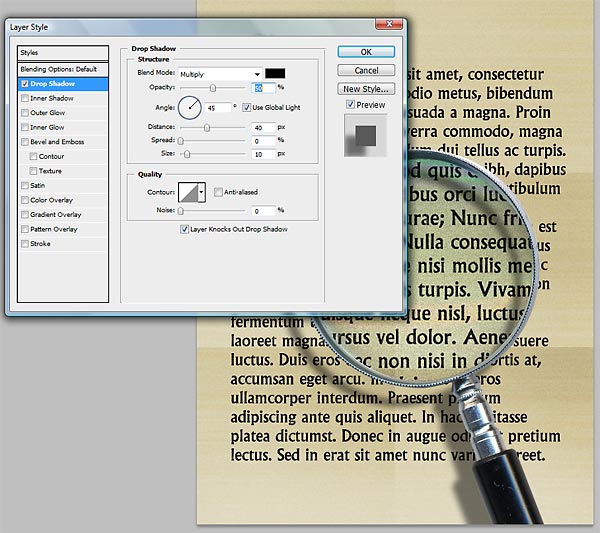 As the highlight on the Magnifying Glass is on the top right dial in 45 degrees for the Angle, Distance of 40px, and a Size of 10, and finally changed the Opacity to about 50% – but feel free to adjust these values according to your own image.

In the last step we dialled in on the Fill slider 0% to make the pixels transparent so we could see the effect but we don’t have to be this heavy handed as it also kills all those lovely colours and specular highlights that really sells the Photo-realism of the lens, so dial in about 20% or so to bring back some of those details – now that looks better! 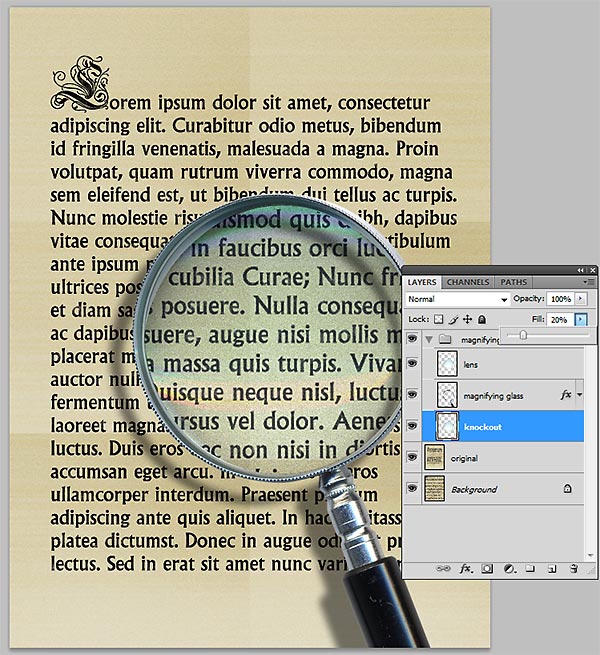 And that’s the final effect. I hope you enjoyed this tutorial.

It’s a simple effect and once mastered and is flexible enough to allow for experimentation; such as instead of a magnify effect you can have the original image as a darkened version of the Background layer and use a Knockout shape layer to create a spotlight effect, or use the Knockout layer to isolate colours from a colour Background and a Black and White layer, maybe even a spooky X-Ray effect using a face layer with a skull image behind it – have fun.

And on the Web

3 Comments on It’s a Knockout: the Magnifying Glass Effect