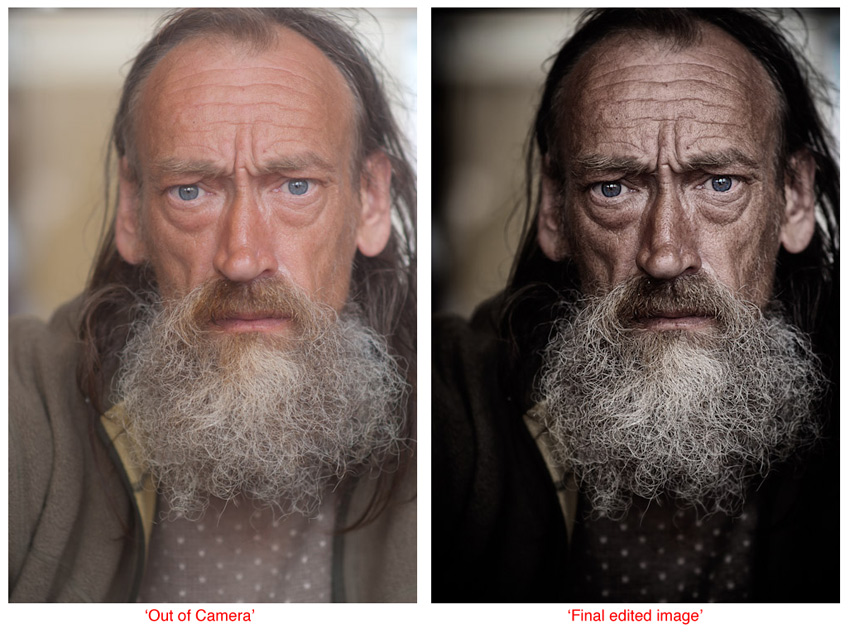 The images above show the ‘out of camera’ and ‘final edit’ versions of a photograph that I took of a ‘Rough Sleeper’ when out on a photo walk in the coastal town of Brighton, UK, and in this post I want to show you each of the stages I went through in Photoshop to achieve the final look.

First of all here’s a video to show you the editing in ‘real time’ and beneath that I’ve followed up with a walk-through of each of the 8 simple steps:
Enjoy 🙂

1: Levels Adjustment
The ‘out of camera’ image was lacking in ‘blacks so a Levels Adjustment was made where the shadow slider was moved a short distance to the right so that it touched/lined up with the far left of the histogram. 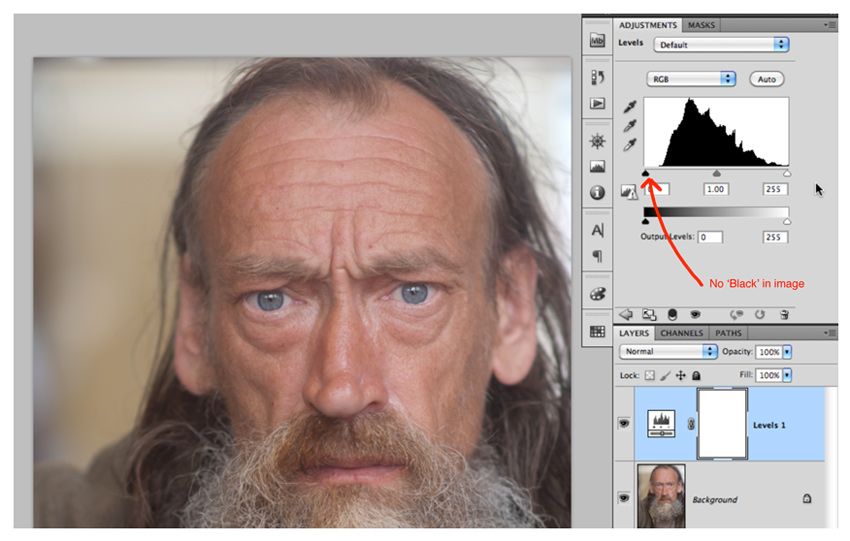 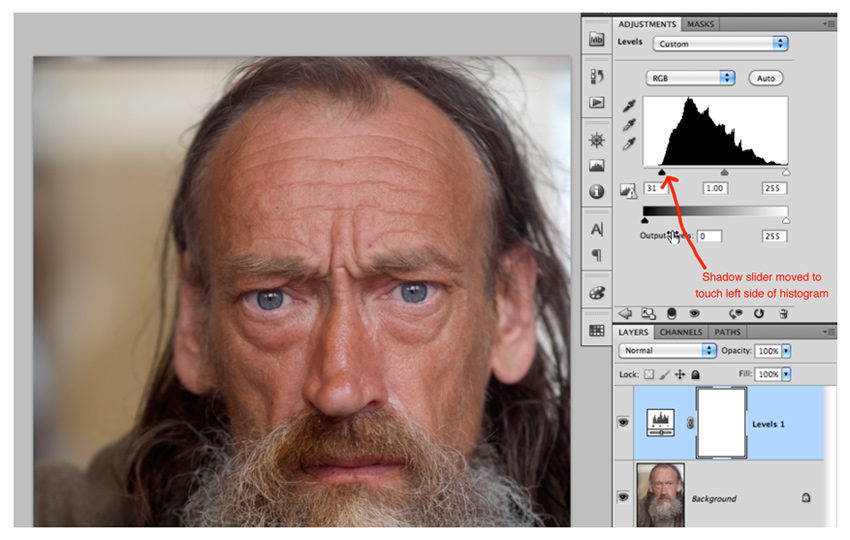 2: Add contrast to eyes using a Levels Adjustment
To make the eyes have more impact and stand out, first of all I selected them by selecting a brush, a foreground colour of black and then pressing ‘Q’ to enter Quick Mask Mode. All I did then was paint inside the eye (which will be visible by the red overlay) and once all selected just pressed ‘Q’ again to come out of Quick Mask Mode. To saturate the colour and add more density to the eye all that was needed was a Levels Adjustment Layer and moving the Shadow, Midtone and Highlight sliders to taste. 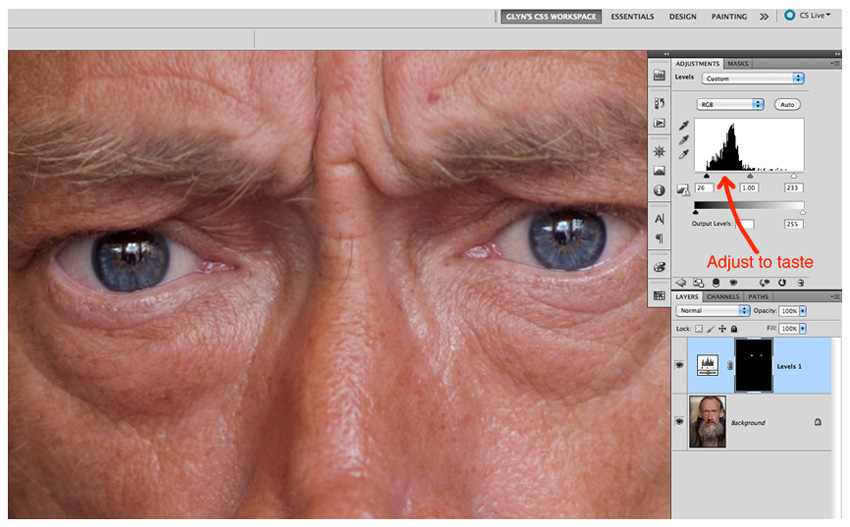 3. Add contrast with a Curves Adjustment Layer
Contrast was then added to the image using a Curves Adjustment Layer and selecting one of the presets…’Medium Contrast’. Now, as I’ve mentioned before, adding contrast to an image does also have the effect of saturating the colours (as happened in this case). Normally this isn’t something I’d want to happen, so to remove the saturation but keep the contrast boost you can simply change the blend mode of the adjustment layer to Luminosity. However, knowing what I was doing next in Step 4, I kept the saturation as it was.

More:  Creating a 3D Ground Plane to Match an Image in Photoshop 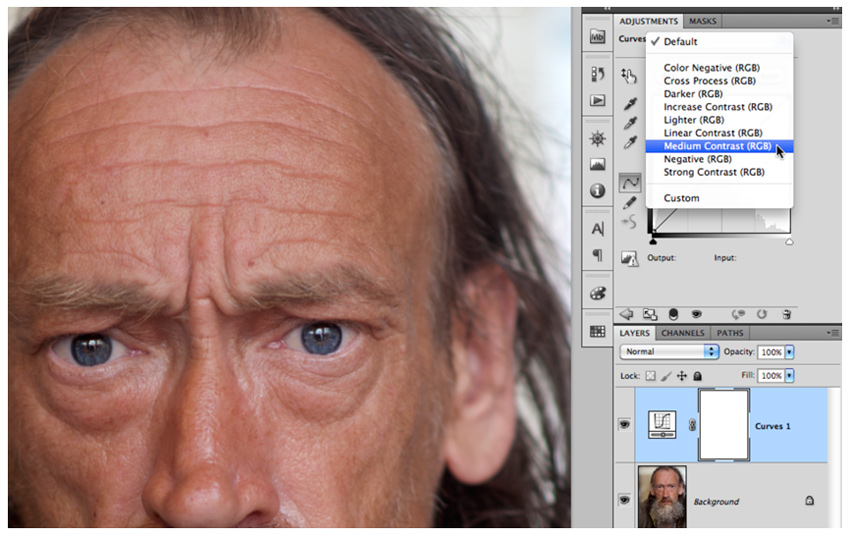 4. Reduced Greyscale Layer
To make a Greyscale (Black and White) Layer I used Nik Silver Efex Pro which nowadays is all I ever use, however you don’t need it to do this tutorial. Use any of your own preferred methods to convert the image to Greyscale so long as the result appears on it’s own layer. Once I’d created the greyscale layer all I did then was reduce the opacity so that the colour from the underlying layer started to show through just enough to give me the look I wanted, which in this case was around 75% (allowing 25% of the colour from beneath to show through). 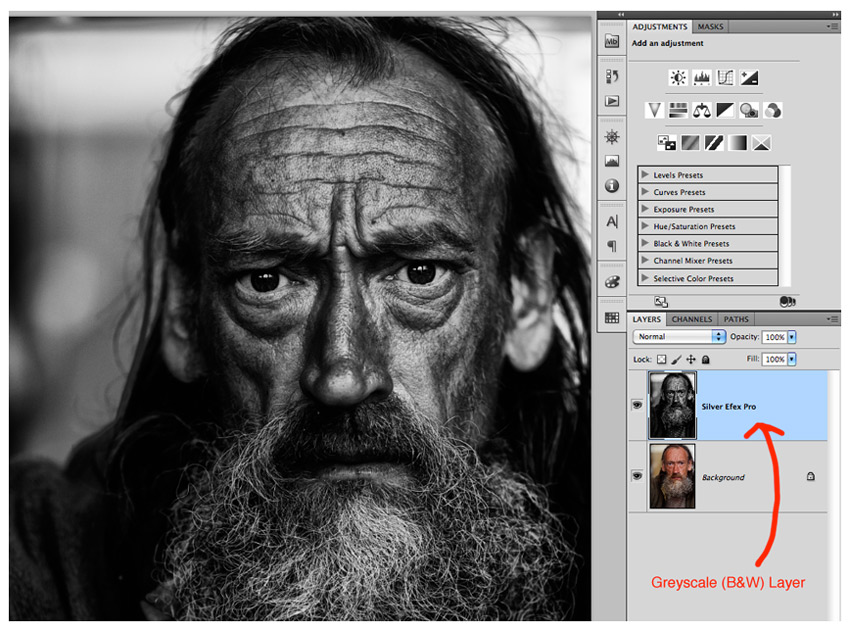 AFTER: Greyscale Layer opacity reduced to 75% 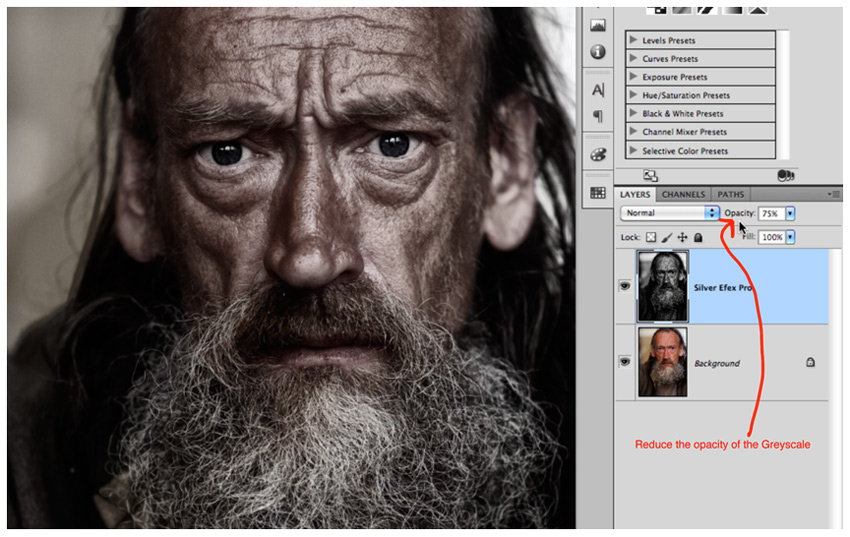 5. Restore eye colour with a Layer Mask
A side effect of adding the Greyscale layer is that the colour / tone in the eyes that we did in Step 2 is lost, so to recover it all that was needed was to create a Layer Mask and then paint in black using a brush over the eyes and the colour in the layer beneath shows through. 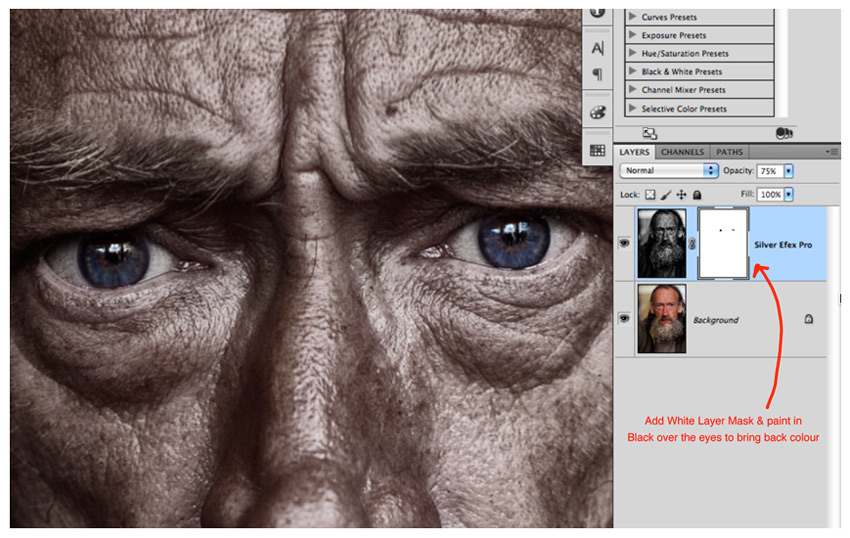 6. Add detail to hair using the High Pass Filter
I tend to use the High Pass Filter when I’m looking to bring out detail in such things as stubble or as in this case a ‘shaggy beard’. I’ll always apply it to a duplicated layer so that if need be I can reduce the strength of it later by reducing that layers opacity. So, all we do is go to FILTER (in the top menu bar) then OTHER…HIGH PASS. This brings up the dialogue box you can see in the image below and all you need to do is choose a RADIUS amount. The higher the radius, the more of the image you’ll see appearing through the grey overlay and consequently the more detail/sharpening will be applied. 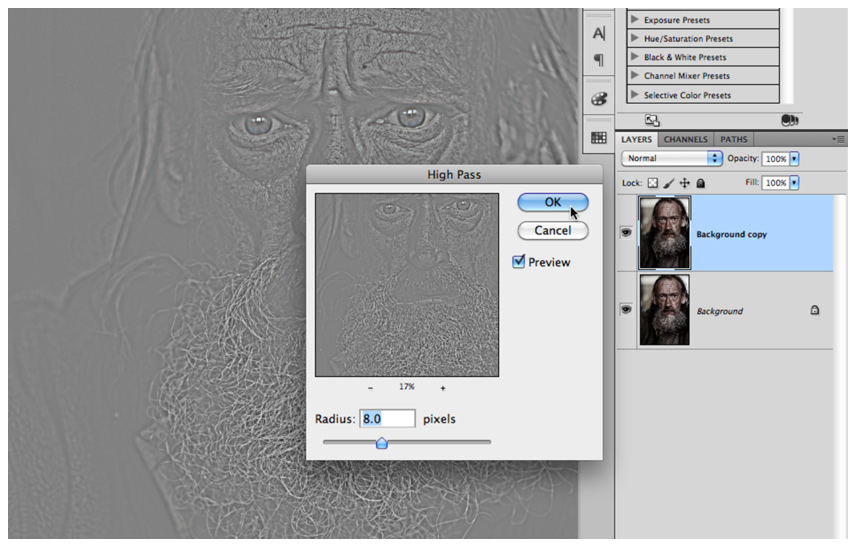 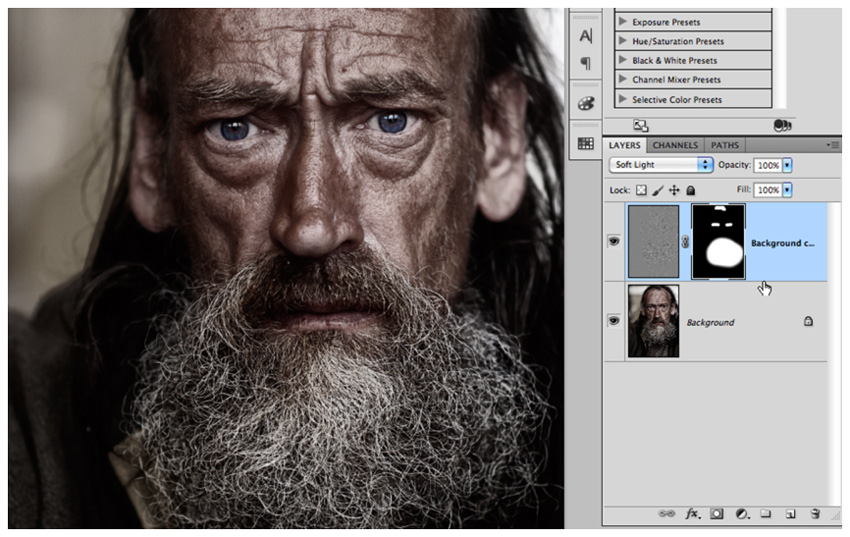 More:  Photoshop Shape on a Path 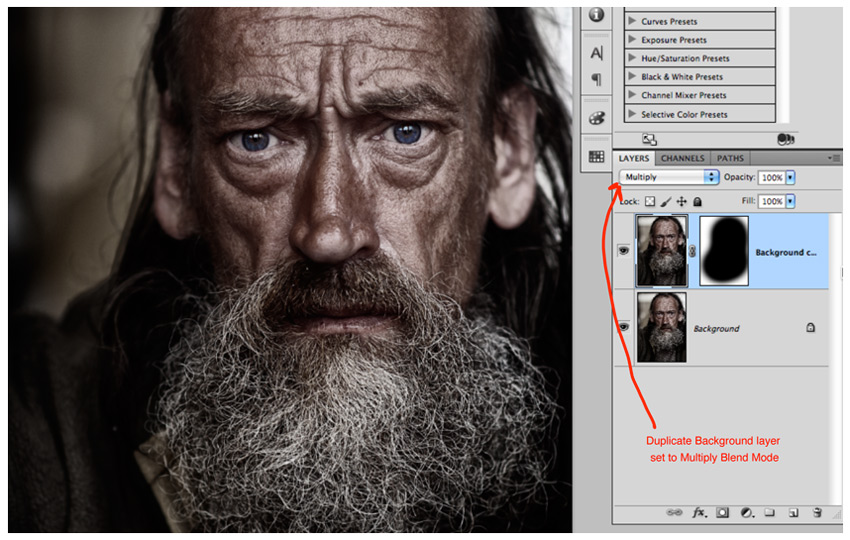 8. Reduce Saturation
To finish off the image all I have done then is add a Hue/Saturation Adjustment Layer and moved the Saturation slider to the left slightly so as to reduce the overall colour of the image. 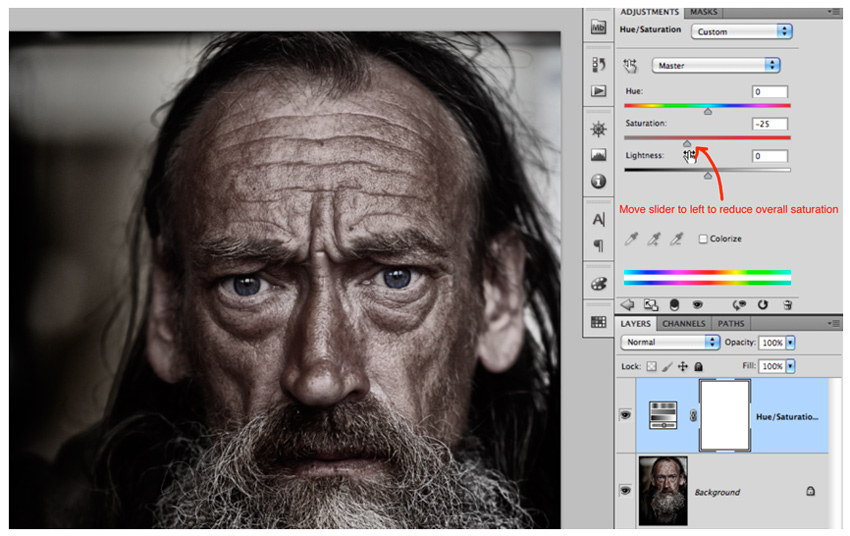 So there you have it…the 8 Steps I went through to edit ‘The Bearded Guy’.

5 Comments on Grunge in 8 Easy Steps