What is “Franken-face”? Consider this image: A young woman sitting on a pony on a bright and sunny day; what a great memory! The daughter of the woman pictured cherishes it, but would really love to have an even better image. The picture, which is fading, was taken under some pretty bad lighting conditions. The whole lower portion of the face is in shadow, there are two bits of light on the chin which sort of look like sun fangs, and the eyes are also completely shadowed, giving the face a bit of a Frankenstein effect. Franken-face. The owner of the image thought it was pretty hopeless, the idea of bringing some detail out, but it’s never completely hopeless if there’s any detail left at all! 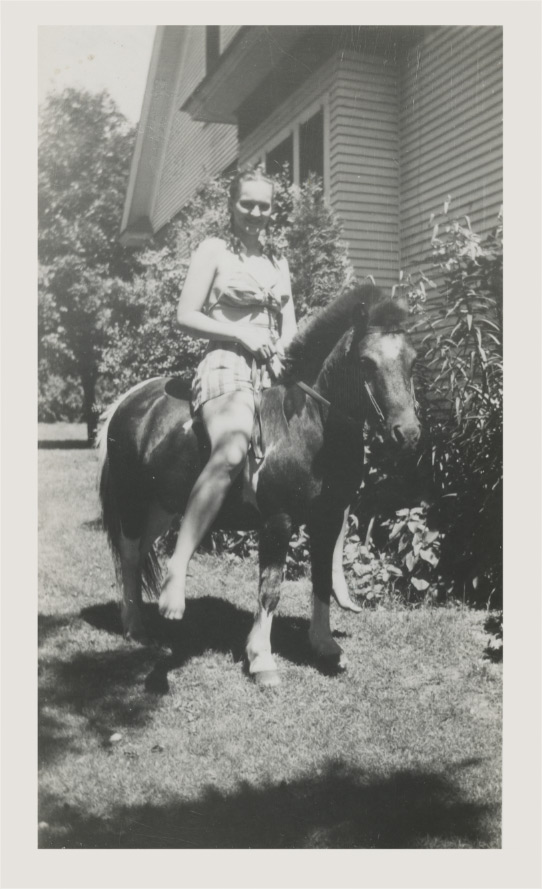 The first thing we’ll do is give an overall darkening to bring out the details a little bit, to give a better idea of how dark the darks really are and how bright the lights. Go to your adjustment menu and select curves. Using your black eyedropper, choose an area in the picture that’s darker than the rest of the image. Select the white eyedropper and select the whitest portion. I used the frame of the image itself, since I knew it was, originally, white. Lower the opacity, even if just to 75%. Curves adjustments can make a black and white image very stark; I like to bring it down just a bit to tone it down.

Now we’ll deal with some details. Remember, the client thought it was hopeless because to the naked eye, looking at a 3”x4” image, it can look pretty hopeless! But once the image was scanned in and opened in Photoshop you can see there’s just a bit of detail there. 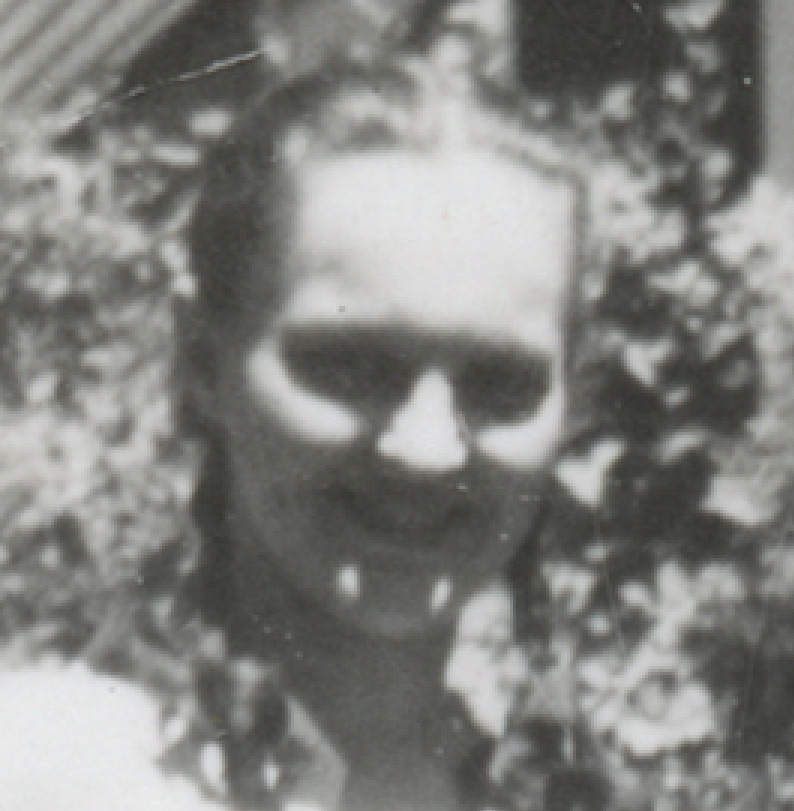 This is going to look pretty odd, but I’d like you to humor me for a minute. Add a new, blank layer and change the blend mode to Soft Light. Select the brush tool, set to 100% hardness and 1 px in size. With black as your foreground color, go over what little detail you can see. Do you think you see a slight outline of the eye? Trace over it. Is that a pupil peeking out, there? Color it in. When you’re done, sit back and look at the tracing. If the person is now cock-eyes and has a pupil on one chin, you might want to go back and try again. Sometimes you can get lucky and see details more than others, even bring some out using blend modes or adjustments, but when the detail is as far gone as it is in this image this may be all you can do. 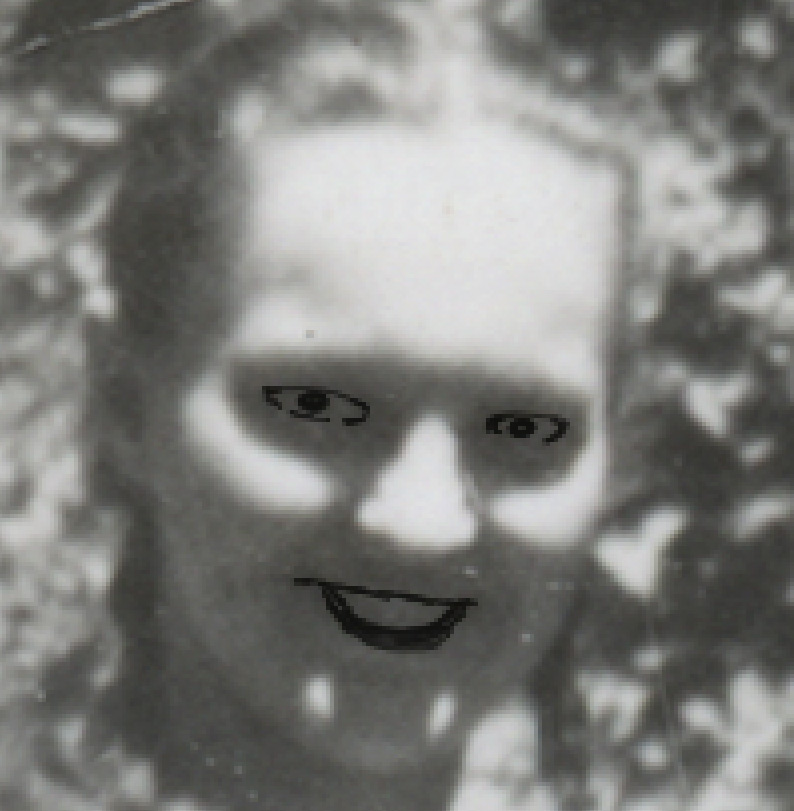 Now we’re done! Ok, not really. The trick, now, is to make what looks like a comic book drawing look natural. The first step is softening. You want it softer, not blurred out of existence, so either use a very low setting on Gaussian Blur or use your Blur Tool, set to around 75%. You want this sort of result: 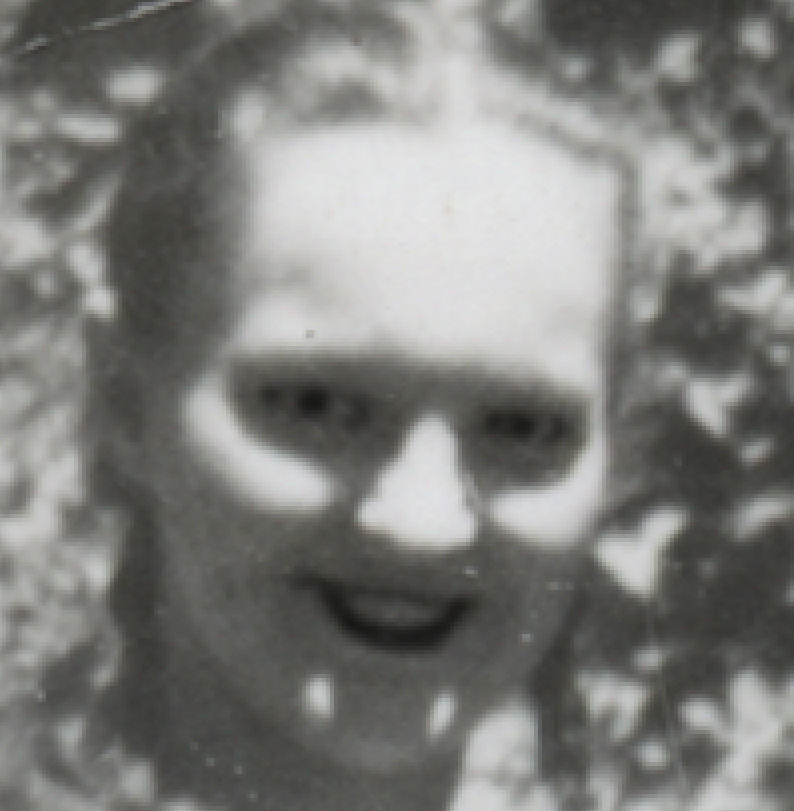 Bring the opacity down to around 40% or so. Use your common sense, here, and lower the opacity until it looks natural. You’ve just given the image some definition back without it looking like you drew it in, even though you basically did! 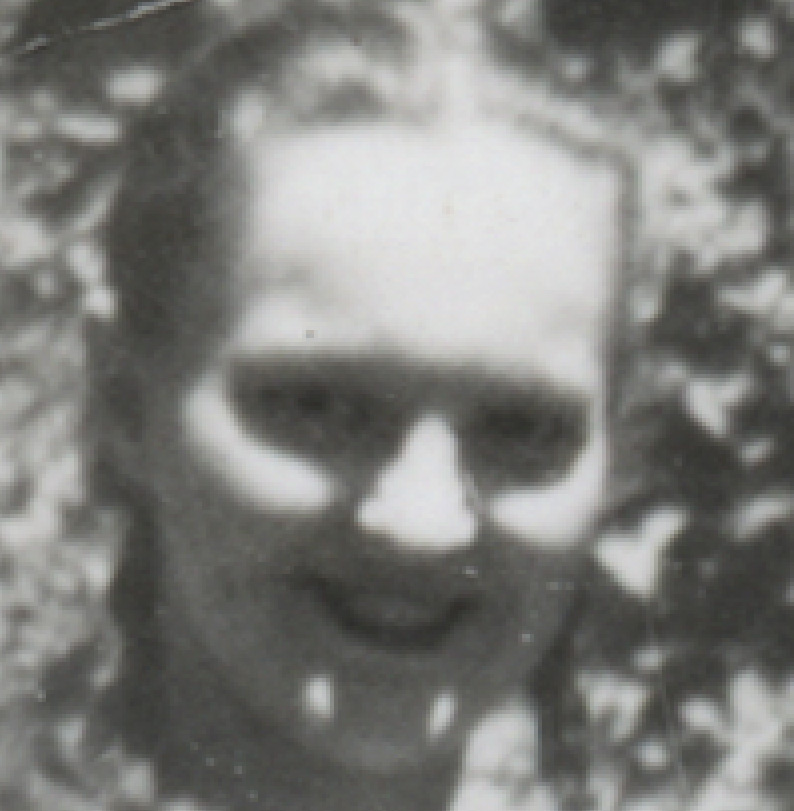 We’ll tweak the definition more, later, after we tone down the shadows a bit. Open a Curves Adjustment Layer and bring the Histogram up towards the upper left hand corner. 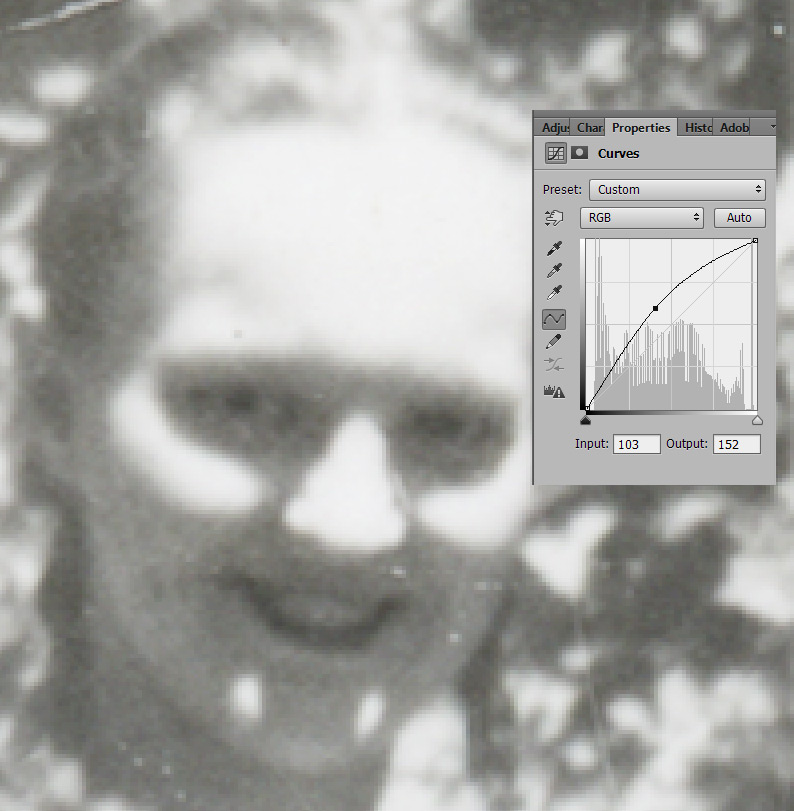 Invert the adjustment mask (Cmd or ctrl +I) and set the foreground color to white. Paint in the shadowed areas you wish to lighten. 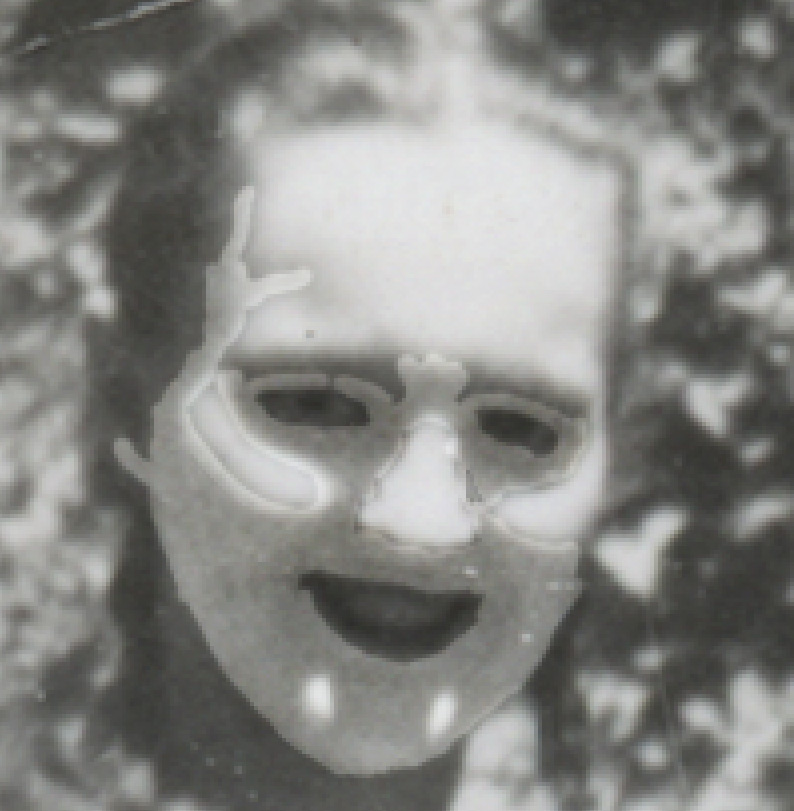 This part’s tricky; while it would be perfect if you could just make the shadowed areas as light as the rest of the face, and do away with the shadow entirely, that’s not realistic. There’s going to be shadow – the sun is shining. I’m afraid in a case such as this you’re going to have to be content just to lighten things up a little. Resist the urge to do too much, or it’s going to look really bad. After lightening the shadows, use Gaussian Blur to soften the area. Keep it very low, in the minus 2 range. Lower the opacity, keeping an eye on the results. I brought it all the way down to 10% opacity. 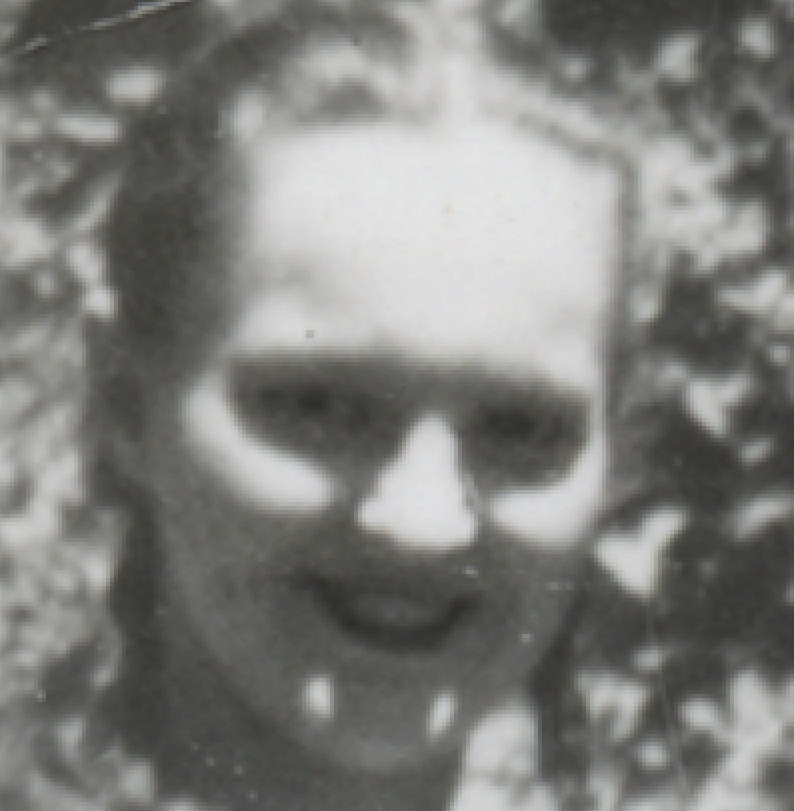 Now that you can see things a little clearer, you can make adjustments to the areas you want to bring out. I think I made the top lip a bit thin and I see some dimples going on, so I’ll make a new, blank layer, change the blend mode to Soft Light and draw in with black again. Soften with light Gaussian Blur or the Blur Tool, and lower the opacity. I went down to 10%. Baby steps are better than big leaps.

So what to do with the sun fangs? Make them go away! They don’t add anything to the image, historical significance, or anything, so just make them go away! I don’t want to combine all the layers into a new layer because I may decide I want to change an opacity level, or something, and I want to keep the background layer as the before layer, so select the background layer and hold down the Ctrl or Cmd key, plus J to duplicate the layer. Name it “clean-up”, if you like, because you can also use this layer to do all your little clean-ups of the lines, specks and spots.  For now, though, I’ll use the Patch Tool, set to New Selection, select around one of the “fangs” on the chin, and move it to the left. Next I’ll select the other “fang” and move it to the right to avoid and repetition of pixels. Fangs no more! 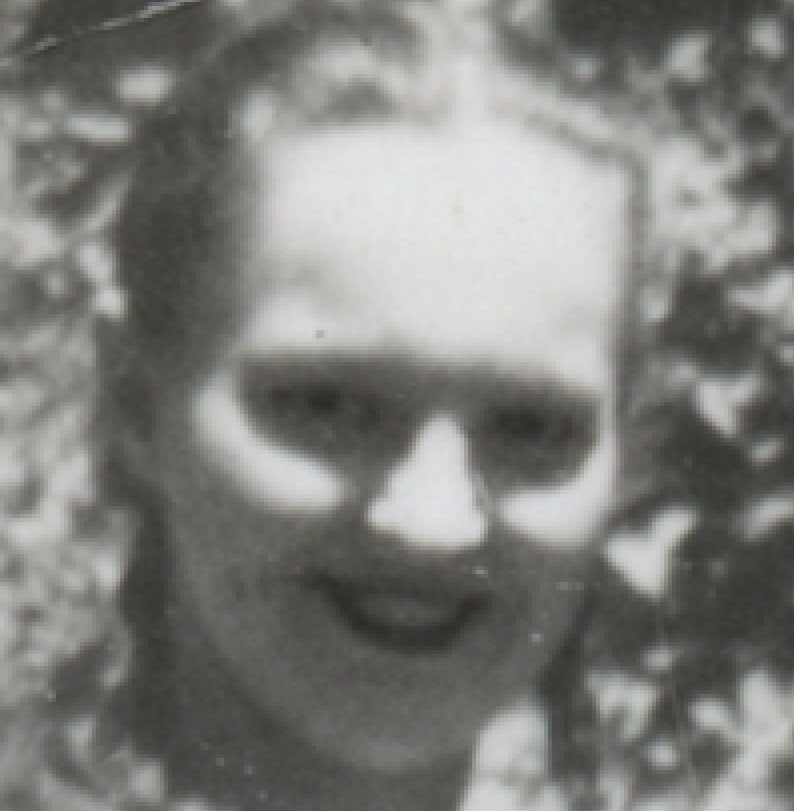 It would be very easy to go overboard at this point, but sometimes it’s better to stop. All the client wanted was some detail back and I think that’s been accomplished! I tell you, I absolutely hate the way this shadow looks on the face and will continue to try and make it look better. We’ll see how that goes! 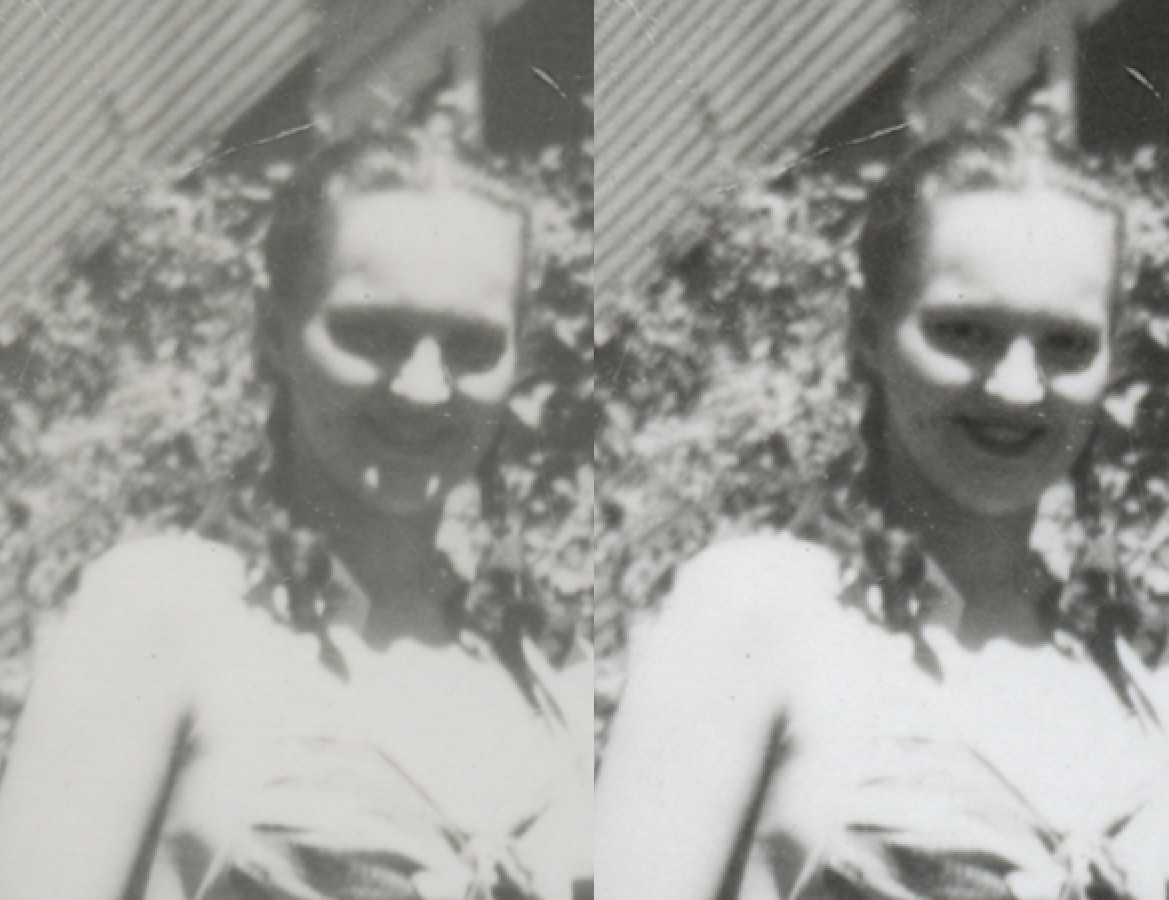