Plugin makers Alien Skin Software recently released Exposure 4, a new upgrade to their flagship photo-styling product for Photoshop and Lightroom. Exposure 4 can apply a wide range of color and monochrome effects to your photographs, and now uses a completely re-designed user interface. I recommend you download the free trial if you haven’t yet; this plugin makes it easy to create and save custom styles in very short amount of time.

In Part 1 of this tutorial, we’ll cover some basic technical details that you’ll need to consider before starting your IR workflow in Exposure 4. Then you’ll learn how to apply dramatic IR looks to a picture with a few clicks, and subsequently customize the look to control halation (more on what that is in a bit) and improve contrast. In Part 2, we’ll take a look at how we can further style this image for both contrast and color, and put the finishing touch on with a nice border.

For a starting point, I recommend using some type of landscape or outdoor image, preferably one that has a good dynamic range (i.e. a wide range of light-to-dark tones), and one that contains substantial areas of green and/or yellow. This is related to the fact that when we “simulate a view of the world” in infrared (a part of the electromagnetic spectrum that humans do not perceive, much like ultra-violet light), greens and yellows tend to produce the most interesting highlight details. Let’s take a look at our test photo in ACR… 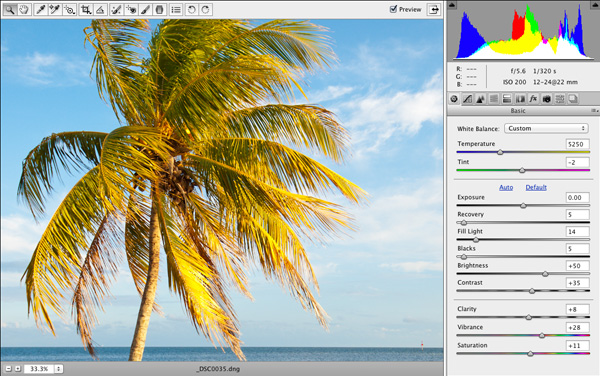 This landscape view fits the criteria I mentioned earlier. The tree provides a lot of green and yellow, while the sky and water offer darker blue tones that will be helpful later, when optimizing the contrast. In addition to the Basic panel settings seen here, I boosted the saturation for Yellows and Blues in the HSL panel as well. Remember that what you’re trying to do at the raw stage is not produce the most realistic looking photo possible, but a shot where the colors contrast boldly (without pushing it to ridiculous levels), as well as one that has a fairly strong overall contrast. The worst thing you can do is start with a dull, flat-looking image that doesn’t have much color.

Once you have the raw-processed image open in Photoshop, choose Filter > Alien Skin > Exposure 4. After a brief pause the image will open in Exposure, revealing the updated user interface. Seen below, the application is well organized and easy to use. At top-left we have a large preview image, and below that list views for Factory and User-made presets. As you roll the cursor over any preset, the preview will update to give you an idea of how the final shot will look. 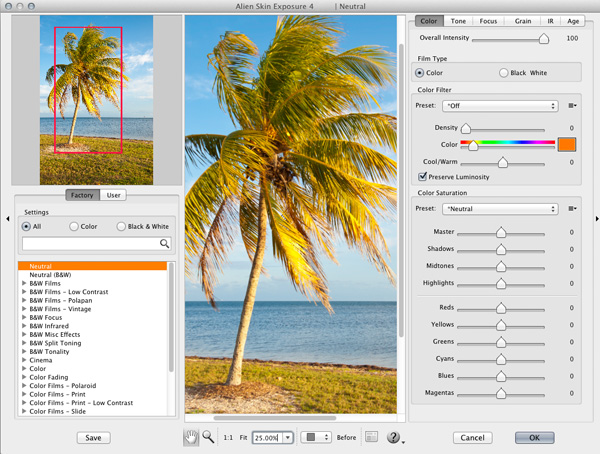 The central area of the window houses the working preview, and below that a series of view controls and access to news and preference items. Down the right side of the UI is where the real power is! Whether you are working with Color presets or Black & White presets, you have access to the same six control types: Color, Tone, Focus, Grain, IR, and Age. As you change each preset, the settings in these areas will vary, and once you settle on a preset this is where things are customized. Let’s take a look!

First I clicked on the Black & White mode to display only those presets, and then I clicked open the “B&W Infrared” category to view the various options. The IR presets available in most cases simulate a particular film type, but there are also some generic IR preset types. I went with the High Contrast option because it did not involve any addition of simulated grain, and provided the best starting point for this workflow. 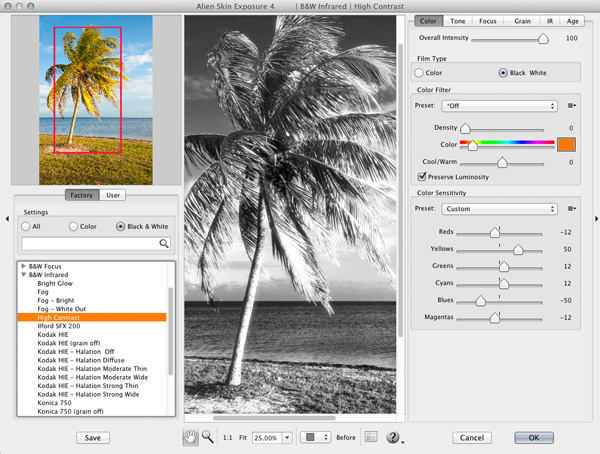 Once the preset is applied you can collapse the preset preview and preset list by clicking the black triangle on the left edge of the window. Next you’ll want to investigate (by clicking through them) which control categories have been modified by the preset. Here the Color, Tone and IR areas were used to create the default High Contrast look. In this case I decided to work backward, starting with the IR settings first.

More:  Use FFT To Reduce Texture 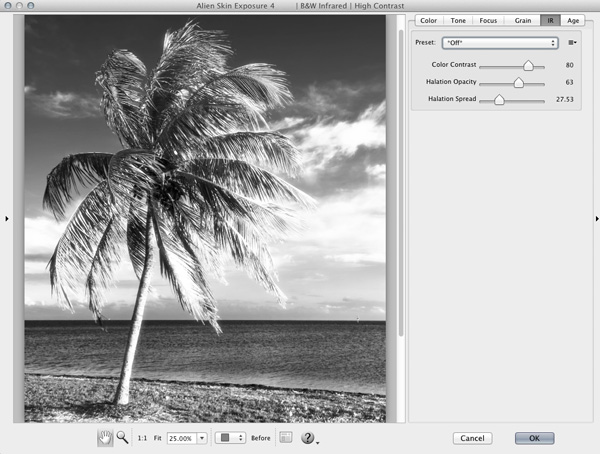 You’ll notice the IR Preset popup says * Off * . Those asterisks are important; they let you know that the settings have been changed via the High Contrast preset, even though none of the specific IR presets shown in the pop-up menu have been applied. The IR controls include Color Contrast, Halation Opacity and Halation Spread settings. Color Contrast looks at the regions of blue and green in an image, and lightens/darkens them in order to create tonal contrast (this is part of the reason for my earlier landscape recommendation). Keep in mind this will work a bit like HSL in that many compound colors will have elements of blue and green, or green and yellow. In this case the blues were made darker and the yellows and some greens made lighter.

For this example I wanted to make the sky very dark so I bumped the value up around 90. Next you can reduce the Halation effect, which is basically a soft blur that occurs around the brightest details in an IR image. I bumped both Halation settings down far enough that the clouds regained most of their detail, and the palm frons appear to glow only slightly. You may have to zoom in a bit to make sure the Halation is under control in the edge detail areas (below). 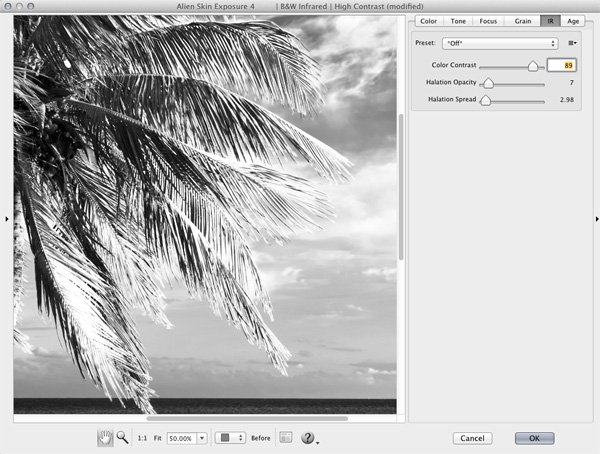 Next, click the Tone button to reveal the Tone Curve and Spit Toning options. Here you can see the default curve that is used to create the Strong Contrast IR preset. It’s always a good idea to look at the Curves because even small tweaks can make a big difference and give you a lot of added control. 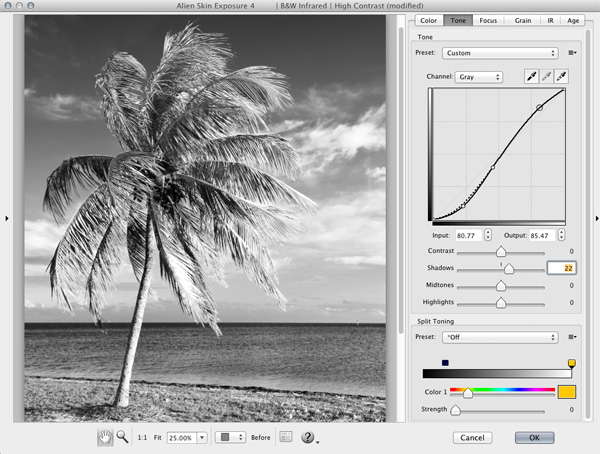 For this photo, I decided the highlights were still too bright even after Halation control, and the mid-tones were a bit too dark. So I clicked and dragged the top-most control point downward slightly, then dragged the central control point upward and to the left slightly. You can also use the Parametric sliders beneath the Curve to move the parts of the curve that correspond to each quadrant of the Histogram. When you do this you’ll see a dotted line; this shows where the slider adjustment deviates from the regular curve (notice the shadow area near the bottom-left part of the Curves widget).

From this point you already have a nice IR landscape that you can open into Photoshop for printing or other purposes. Easy, right! To do that you can click “OK” (at bottom-right) and the image will process after a few seconds, depending on the speed of your computer. In the next segment we’ll pick up from this point and show you how to add some selective areas of subtle color and an edgy border effect for added visual interest!