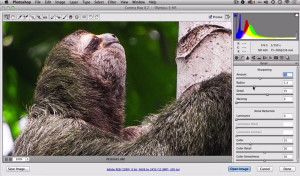 In this workflow example I take take a look at enhancing hair, and what better way than with this wonderful sloth? You’ll see my workflow for this image from start to finish including Adobe Camera Raw and finishing touches in Photoshop.

A certified instructor for Adobe and Apple, Rich is a practiced expert in motion graphic design and digital video. Rich is a member of the National Association of Photoshop Professionals Instructor Dream Team, and a popular speaker on the digital video circuit. Rich is an internationally published author. His book, Photoshop for Video, was the first of its kind to focus on Photoshop’s application in the world of video. He is also a contributing author for Apple’s Aperture, iLife ’09 and iWork ’09, Video Made on a Mac, and Producing Video Podcasts. If you want even more Photoshop training, check out his book Understanding Adobe Photoshop CS4. If you have an iPod touch or iPhone, you can get <a href="http://tinyurl.com/upapps">Rich’s Training in your Pocket</a>
Contact: WebsiteFacebookTwitterGoogle+