When I first started out on this series of tutorials on black & white conversion techniques I started to think about how black & white photography has changed since the advent of digital and I think our relationship to the medium has been radically transformed. Where once we set out to take black & white shots, with only a roll of black & white film in our camera, we now do not have that choice as our cameras shoot in colour and black & white is a choice that is made in post-processing. The old disciplines of black & white are falling by the wayside and I, personally think thats a shame. I know there are some great photographers out there who shoot in black & white but the vast majority seemed to have been seduced by the saturated colours of the LCD. So I’ve decided that this first tutorial should be less of a tutorial and more of a call to arms and a base to build upon to start you thinking in black & white before we start to discuss conversion techniques more thoroughly

Take a look at these two shots and see the difference that black & white has made to them. When I took them I intended the results to be black & white so I thought how colours, tones, contrast and textures would look in monochrome.

While it may seem slightly archaic to consider how black & white film worked I think it is very helpful in helping you create a good black & white image, and it also helps as most of the conversion techniques we use are still rooted in the days of film.

Where colour film utilised layers of emulsion sensitive to the three primary colours, in much the same way as digital sensors do today, black & white film had one emulsion layer that was sensitive to all colours (panchromatic) reproducing them in shades of grey. However not all films reacted to colours in the same way,and a photographer would choose his film or shoot with the tonal range of the film in mind. Photographers would also use coloured filters to enhance colours or tone them down; one of the classic examples was to use a red filter to darken a blue sky, this worked by stopping all the blue getting trough to the film and making areas of blue appear dark as little light had affected the silver halides.

The key thing to take from this explanation (a very reductive explanation) is that a photographer would know his film and would picture his scene knowing how tones would appear, how a blue would look, how skin tones would be reproduced and that is what we don’t always consider when shooting with a digital camera.

Today’s digital conversion techniques have a similar processes, or the better ones do. In Photoshop & Lightroom black & white conversions can be altered using colour sliders, similar to putting a red, grey, orange etc. filter in front of the lens (Photoshop even has presets for these filters) and you can tweak a whole range of other colours too. You also have control over contrast which used to be achieved either in the processing of a film or in the printing of an image.

Knowing that better conversion techniques use the full range of colours to produce a decent result you may be able to guess which conversion techniques not to use. These no-nos are an in-camera black & white conversion and the desaturate option in Photoshop. These really are the vanilla commands of the black & white world as they get rid of all the colour data in an image and give a dull representation of the tones in the image. If you are using those commands stop, immediately! 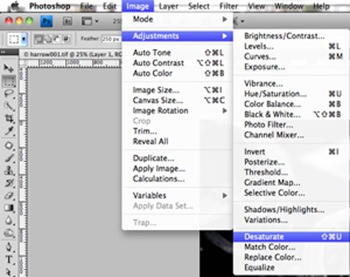 The Realm of the Dark-Side!

Before we get into conversion tips in more depth next month I want you to do me a favour, go out and shoot in black & white for a day, an hour, just try it for a while. Don’t look at your LCD and try to start thinking how a scene may look in monochrome and maybe shoot different subjects than you normally would and start thinking about tone a texture. When you upload your images to your computer start to have a play with the black & white conversion in Lightroom or the black & white conversion layer in Photoshop as these will be the subject of our next tutorial. 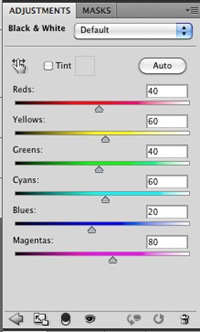