The lovely people over at Fotolia have been very supportive and kind to me since I was a runner up in the Deke’s Techniques Photoshop Challenge some time ago. Part of my prize was a subscription to Fotolia and I found it immensely helpful. Since then Fotolia have supported TipSquirrel by promoting it, offering competition prizes and having cross-blog tutorials.

What Does It Mean To CC Users and Non CC Users? 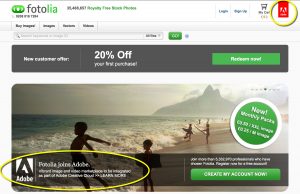 So, with a love of Photoshop and a great relationship with Fotolia it was great to hear that they were coming together. Today (Wednesday 28 Jan) the news was released that indeed, the acquisition had been completed.

During some recent talks at camera clubs I’d speculated with people about what this might mean to the Creative Cloud user and although there’s nothing terribly substantial in the press release, our guess of a streamlined use of Fotolia assets and easy sharing to Fotolia looks likely;

“Fotolia is helping Creative Cloud become the marketplace for creatives to buy and sell high-impact assets, find talent and promote their work in front of an influential global community.”

SAN JOSE, Calif. — Jan. 28, 2015 — Adobe (Nasdaq:ADBE) has completed its acquisition of privately held Fotolia, a leading marketplace for stock content. Adobe announced its intent to purchase Fotolia in December 2014 and the acquisition cements Creative Cloud’s role as a vibrant market for creatives to buy and sell assets and services as well as showcase their talent to a worldwide audience. Work will now begin on integrating Fotolia into Adobe Creative Cloud. This will provide current and future Creative Cloud members with the ability to access and purchase over 35 million images and videos, significantly simplifying and accelerating the design process. Adobe also plans to continue to operate Fotolia as a standalone stock service, accessible to anyone.

Founded in 2004, with offices in New York, Paris and Berlin, Fotolia currently operates in 23 countries and has websites in 14 languages.

With more than 3.4 million members, Adobe Creative Cloud features the world’s leading desktop tools, an array of complementary mobile apps, training content, creative assets and services and ready access to a dynamic community. Creative Cloud is transforming how creatives find inspiration and deliver their best work — and the value of Creative Cloud is increasing all the time through product updates and new capabilities.