So, what happens when you give award winning photo-restorationist Janine Smith a copy of Photoshop Elements? She’s already an expert with Photoshop so just what will she make of its little sister? (Surprisingly, unbeknown to Janine, the parts she highlights here have been a feature of Elements for some time.)

I have Photoshop Elements (PSE7). I mainly had it as reference in case I needed it in tutorial or something; I just never really used it. It’s not that I didn’t like it, exactly; I was just uncomfortable with it. I was used to Photoshop, had worked in it for years (and years) and know it, the tools, the interface, like the back of my hand. I go into PSE and fumble around, can’t find what I want, get frustrated and go home to Photoshop. That’s what happened every time I used PSE. Like all one of them.  But sometimes, things happen that blast us out of our comfort zone and force us to try new things. This is what happened to me.

An opportunity came my way to join the Photoshop Elements 9 (PSE9) prerelease program. This wasn’t an “if you want to” situation, this was a “this is what we’re going to do so you need to” thing. In other words, I had little choice, and am I ever glad, because I have to admit I find myself kind of loving PSE9! What I’m writing for you today isn’t a “here’s what’s new in PSE9” article, that came in yesterday’s post from TipSquirrel. No, this is more of an overview of the program as a whole, from someone who doesn’t know PSE enough to compare old and new features. Written by a PSE Newbie who’s a Photoshop Oldie, if you like…I can’t tell you all the features of PSE9 in this post, of course, but I can share a couple things that really stood out for me.

My first impression of PSE9 was a bit on the underwhelmed side. Long-time Photoshop user, remember? What I mean to say is “snob”. I was a PS Snob. But again, I had that no choice thing working for me, so I started poking around. One thing I found to be very helpful in my training is having specific photos with specific goals, in other words, I had a photo that I had to, for instance, fix a rip on, or do some color correction on. It forced me to actually find and use the tools which applied to that task, instead of fumbling around. I think that’s what did me in on my other attempt at PSE, the fumbling about. This way, I was forced to find things like where the PSE version of Curves is hidden (Enhance > Adjust Color > Adjust Color Curves). It’s a very much edited version of Curves, with only some presets and four sliders to adjust the histogram, but at least it’s there! It isn’t, however, an adjustment layer and is, consequently, destructive, so be sure to make a duplicate of the layer if you like keeping it non-destructive. There’s a nice before and after view in the Curves dialog, though, that somewhat makes up for all the destruction. 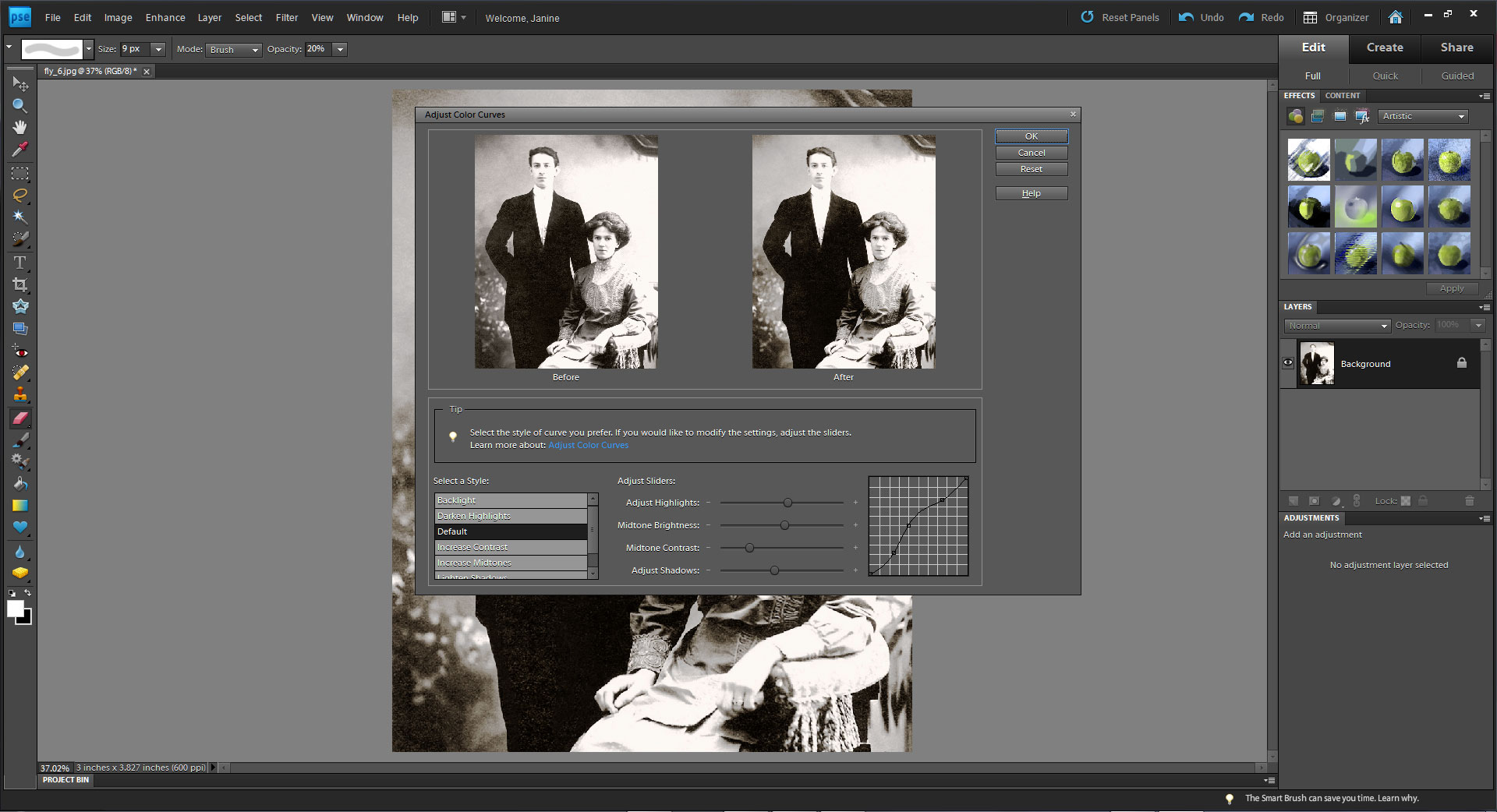 Levels are in there, as an adjustment layer, just like in Photoshop, so that’s a comfort. I think the Curves dialog isn’t horrible, and it does, perhaps, even help people to understand just what a histogram does (“…if I move the Adjust Highlights slider down, I see it moves the histogram this way in this area of the graph”, etc), if, and this is a big if, the person using it actually makes note of what’s happening on the histogram. But, for me, what makes the Levels adjustment a hands down winner is how it is just that, an adjustment layer, non-destructive and re-editable. 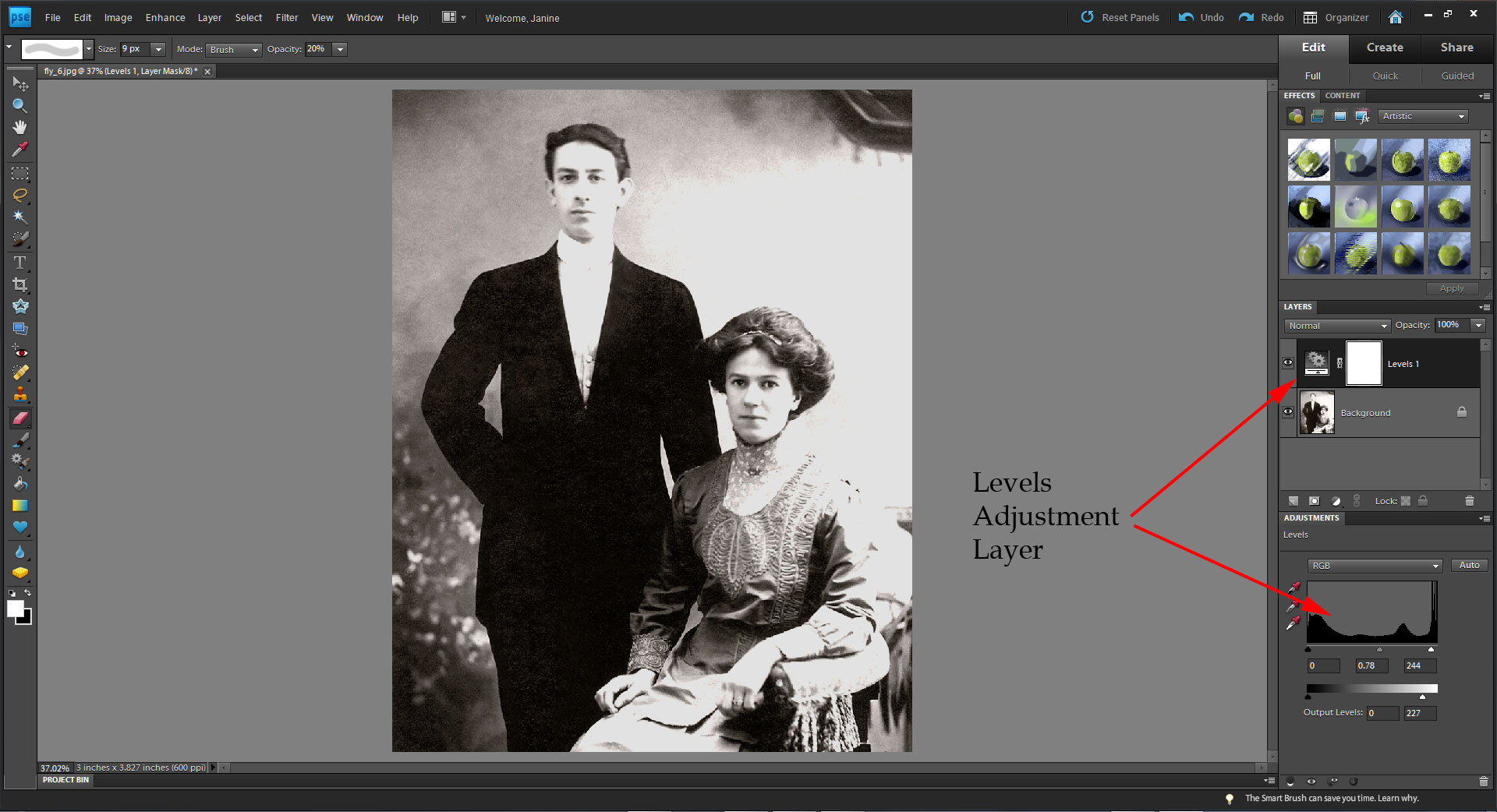 One thing I love in PSE9 is Variations (Enhance > Adjust Color > Color Variations). Yes, it’s still destructive, like in Photoshop, but the dialog itself is really simple and easy to understand. You have only the RGB color space to work with, no magentas or cyans or anything like that, just red, green and blue. There are eight thumbnail options, to increase each of the three colors, or decrease them, and to lighten or darken them. But you can also adjust the color intensity with a slider. You have four areas of the image which you can adjust, Midtones, Shadows, Highlights and Saturation. That’s it, that’s all. Plus the before and after thumbnails are so much bigger than the ones in Photoshop that I can actually see what I’ve done! 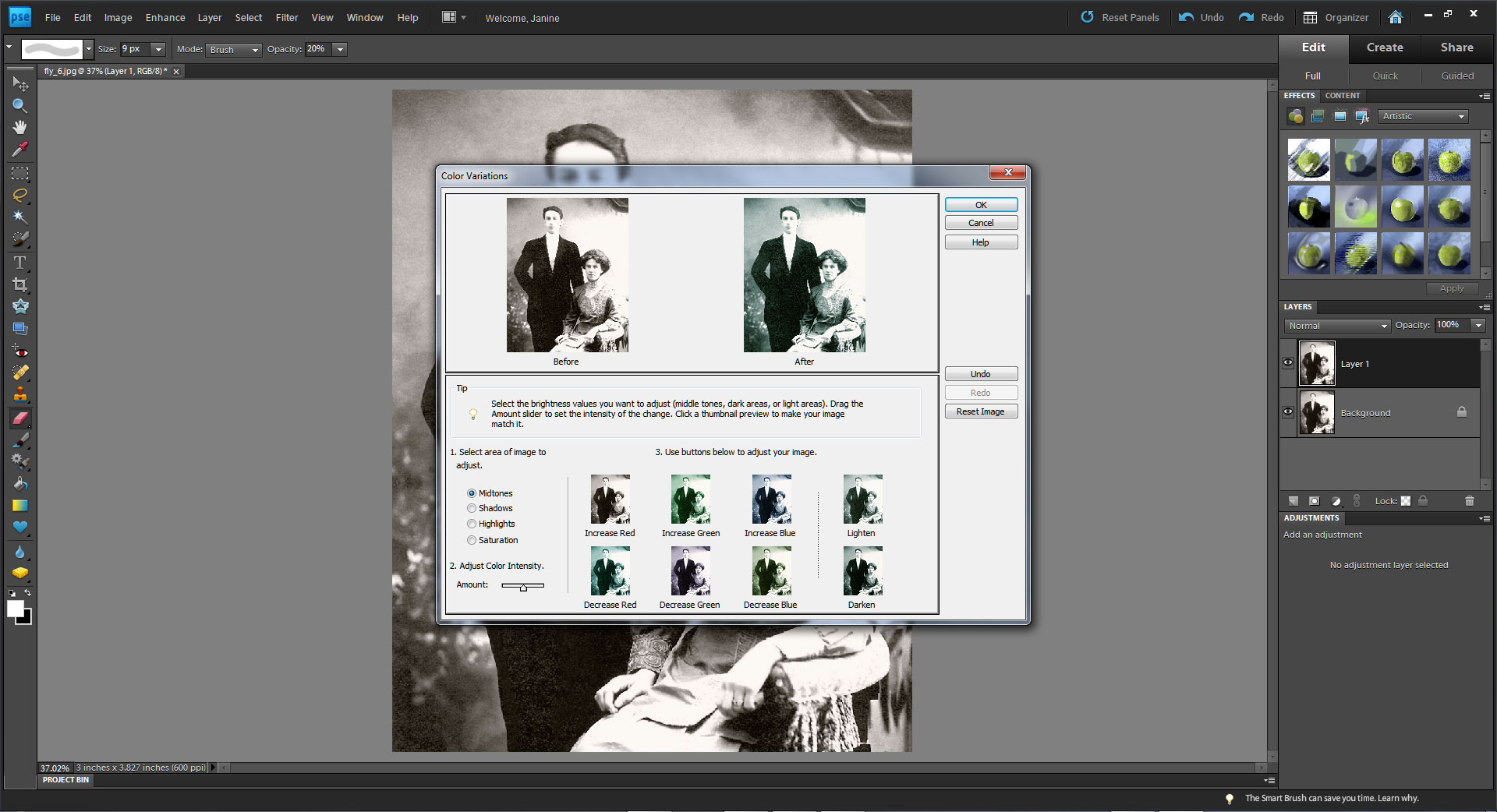 Magic Extractor. Cool. Beans. The ME dialog, found by going to Image > Magic Extractor, is nice and big with very clear instructions. Using the Foreground Brush Tool (the one at the top of the Tool Bar), click in the area you want to keep. It says to click “one or more times”. Me, being the Queen of Overkill, always click more than once, way more. Then, using the Background Brush tool, click the areas you want to erase. Then select Preview to see the result. I used a photo, by way of example, that had background tones that were the same as those I wanted to keep. 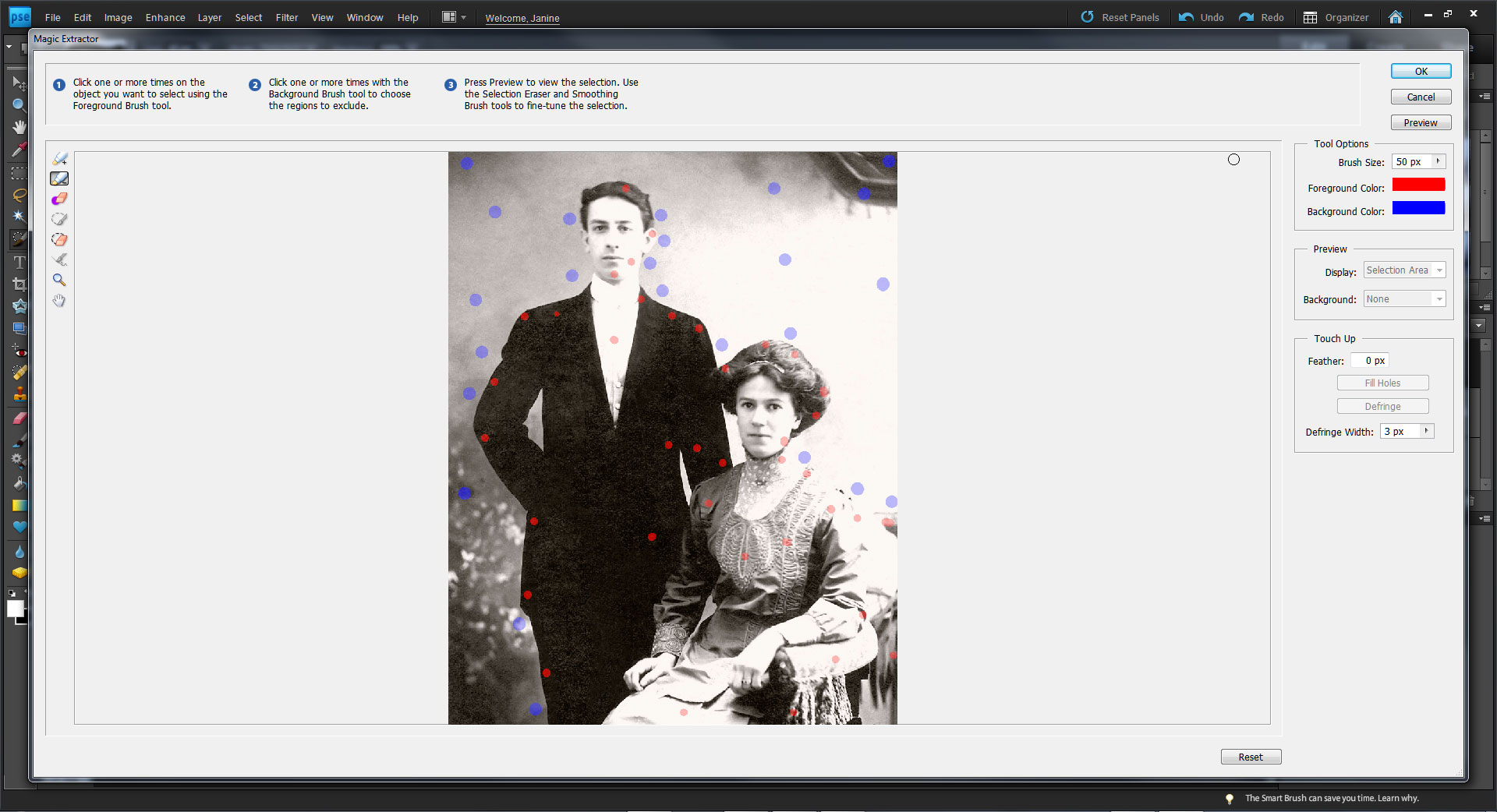 The result you see was one try and one try only (you can see I forgot to include the dark area at bottom left), no do-overs, cross my heart. Look at the areas of the man’s ear and face and the area behind the woman’s right shoulder. These were, literally the same color as the background. That’s pretty impressive, if you ask me! There are also a lot of nice clean up features in the dialog. I’ll be writing more about this in the future! 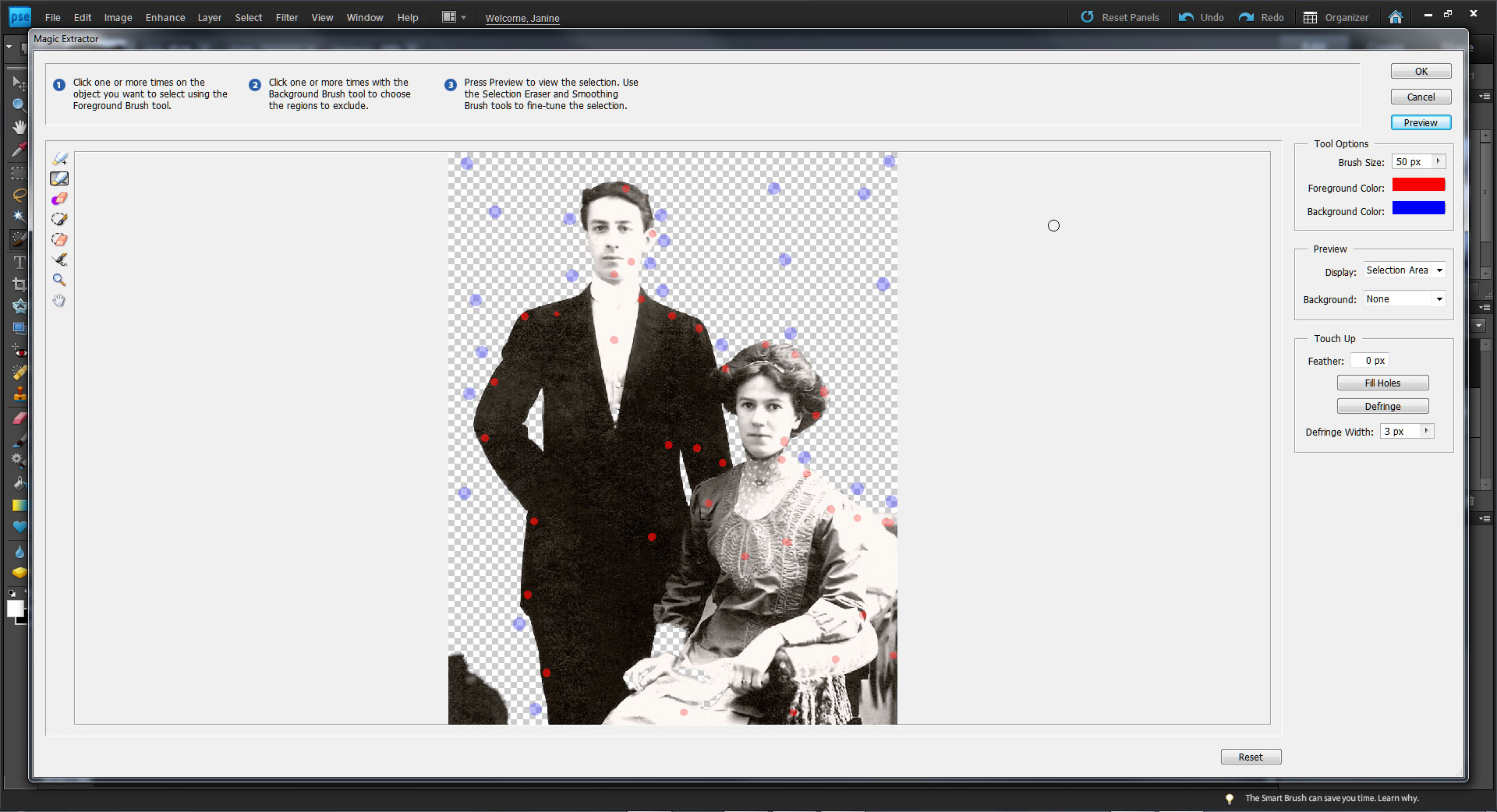 1 Comment on A Seasoned Photoshop User Gets PS Elements