In this tutorial it’s my aim to take you through the process of creating a convincing 3D Glass Ball using basic layer styles and gradients. 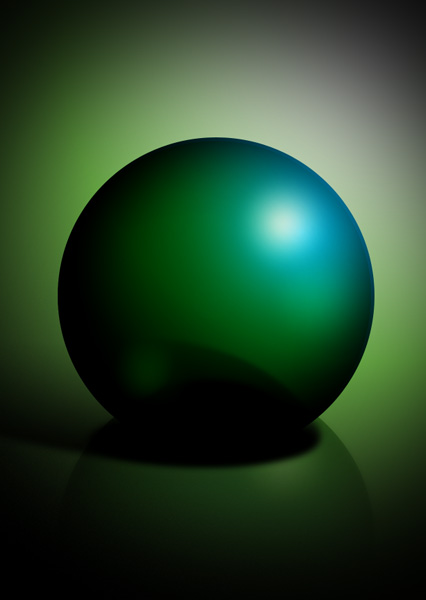 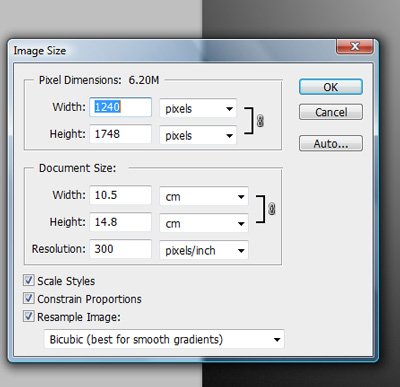 Firstly I created a new document (as above) and filled the background with a Radial Gradient using the Gradient Tool (G) set to the preset of Foreground to Background with White as your Foreground.

I clicked and dragged to simulate light coming from the top left corner.

I then added a Hue & Saturation Adjustment layer set to Colorize to give the background gradient some colour. 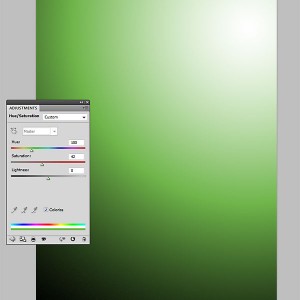 You might be wondering why I chose to do it that way and not pick the colours for the Gradient Fill to begin with. The reason is flexibility, to be able to change hue, saturation and lightness to refine the end image.

Next I created an Ellipse Shape Layer (U) filled with #00c0ff colour (The colour is your choice depending on the final look) and set to an Overlay Blending Mode.

Pressing [Ctrl]+ LMB on the Vector mask thumbnail in the Layer Palette will load the shape as a selection, create a new layer above and using the Gradient Tool set to a Radial Gradient fill with White-to-Black starting from the point where you want the highlight to be on the sphere then drag in the opposite direction of the light. This will create a 3D effect to the selection – deselect this selection [Ctrl]+[D] and set the gradient filled layer to a Multiply blending mode and it inherits the colour from the Vector Layer. 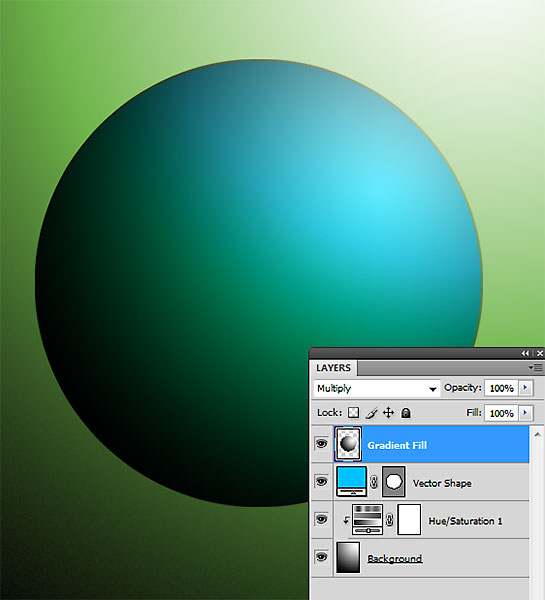 Okay so it looks less flat but hardly convincing 3D!

First we need to put the Vector and the Gradient layers into their own group and name this group appropriately.

So we need to add a specular highlight to create a hotspot of light, so using the Elliptical Marquee Tool [Shift] drag an Ellipse selection where the light would strike the ball and fill with White. Deselect the selection and add Gaussian Blur to suit your image – Less for the impression of more reflectivity and more blur to give it a more Plastic look. 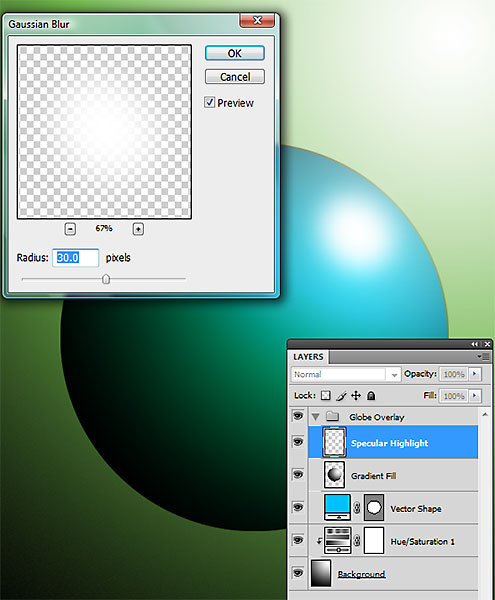 You can lower the Opacity if you feel the highlight is too strong. You can even do a more custom shape to look like a studio light with a soft box or maybe like light from a window.

I also duplicated the specular layer and moved it below and to the right of the main highlight using the Move Tool (V) and set this layer to a Soft Light Blending Mode this was my preference but I leave the finer details down to your own taste.

Next duplicate the Gradient layer and place it above the highlight layers – this layer we will apply filters to create some inner glow and stroke using the following settings. 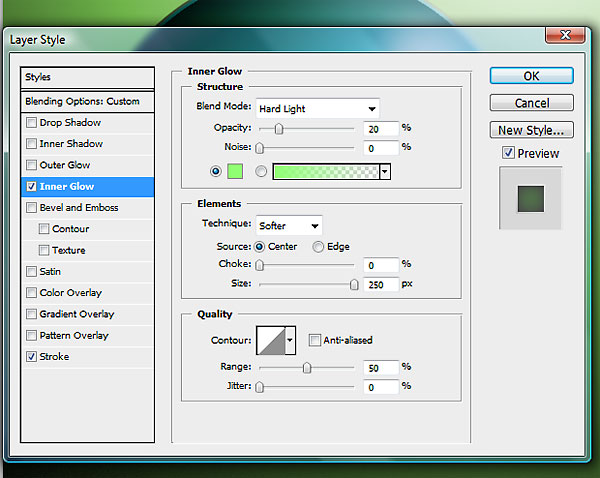 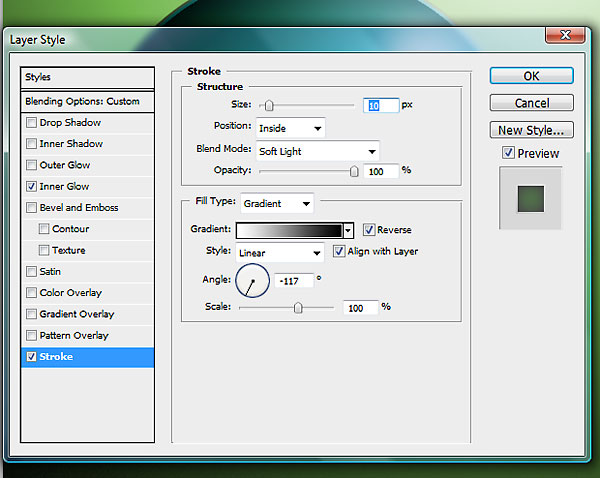 As you can see on the Stroke FX I used an Inside stroke set to Soft Light with a Gradient Fill Type this was to give the appearance that the globe was hollow and therefore you could see thickness of the glass, once again this was my preference you could opt to leave this out and treat the globe as solid glass or crystal. The Inner Glow gives a nice sense of glass and depth to the Globe. Be sure to use a glow colour similar to the colour of your background but a few shades lighter.

Now that the first group is complete duplicate this group and rename it – something like ‘Multiply Group’.

Change the Blending Mode on the Vector Shape layer within this group to (of course) Multiply. 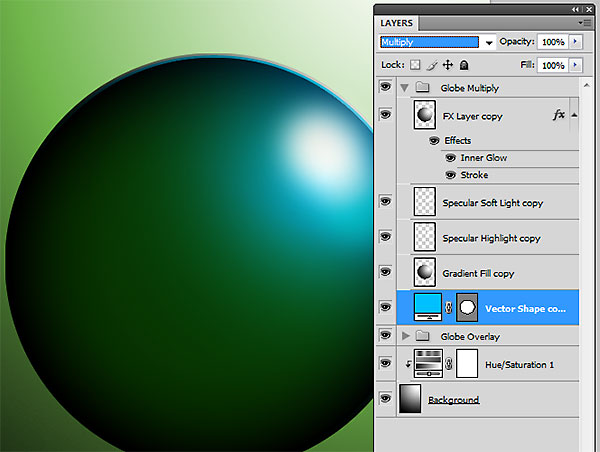 Already it’s taking on the shape of a realistic glass globe but the purpose of this second group is to apply extra depth using Layers Effects to the FX Layer of this group. So we have to delete the Stroke and replace with an Inner Shadow. 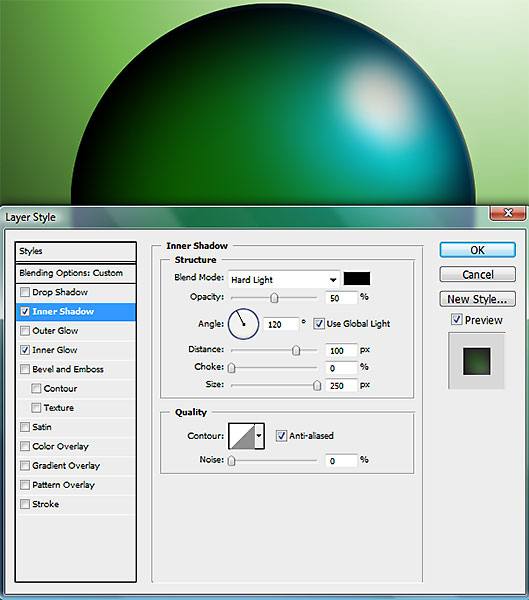 Also to boost the Inner Glow FX its Opacity was raised to 35 within this layer. Return to the first group and change the Blending Mode of the FX Layer from Multiply to Lighten to make the globe really pop. 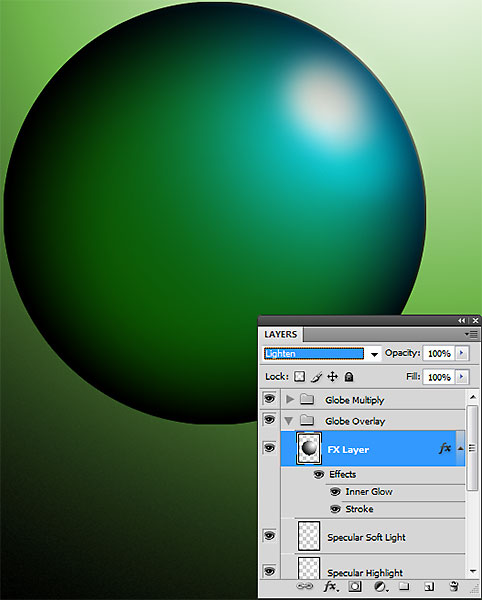 At the moment the globe appears to be floating in space so let’s set a shadow and some reflection to really put the globe into the scene.

To start with grab a selection from the Vector Layer ( [Ctrl]+LMB on the Vector layer Mask in the Layer Palette) and create a new layer below the two grouped layers and fill the selection with Black (or if you want to sample a dark green colour from the background that would be better) and set this shadow layer to Multiply.

Next we need to do so finger-dancing with the Transform Tool – this is good practice – but just before we start on that create a layer mask and using a Linear Gradient White-to-Black drag a gradient onto the Layer Mask. 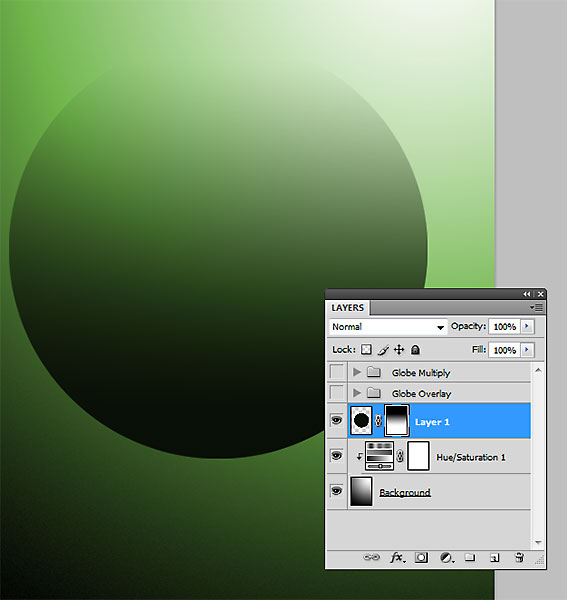 This creates a fall-off effect – which is easier to do now than after the transformation. Now [Ctrl]+LMB click on the layer mask to load it as a selection, [Ctrl]+[Shift]+I to invert the selection now click on the Shadow layer’s Thumbnail icon in the Layer Palette to select that layer and add a Gaussian Blur. 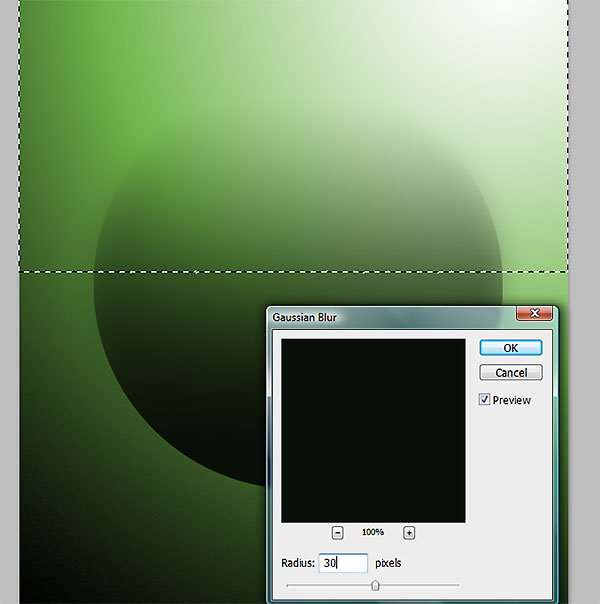 This applies a fall-off blur. Deselect the Selection [Ctrl]+D and we are ready to Transform the shadow.

[Ctrl]+T to bring up the Transform Tool transform box then press [Shift] and grab the top middle handle and drag down until the shadow sits correctly in the background and release the mouse button but don’t press [Enter] yet. 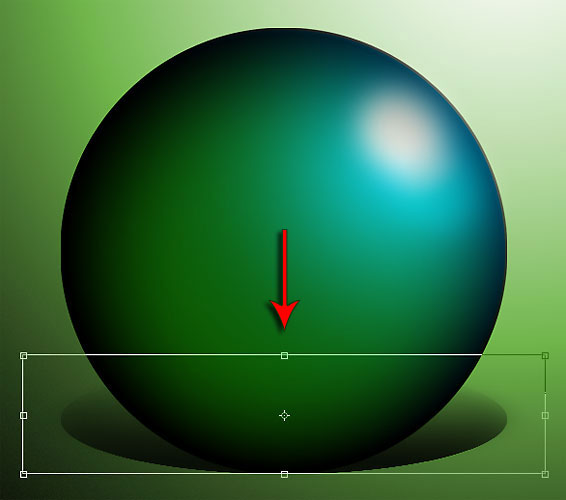 Next press [Ctrl]+[Alt]+[Shift] and grab one of the top corner handles and drag outwards to simulate that a shadow will grow the further away from the object. Release the mouse button but don’t press [Enter] just yet one more stage to go. 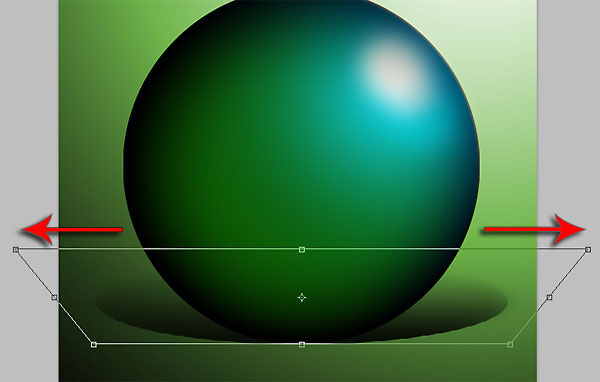 So far so good, we will now transform the Shadow to fall in the opposite direction of the light. [Ctrl]+[Shift] grab the Top Middle handle again and drag to the left like so.

Press [Enter] to commit the Transformation.

The Shadow at the moment makes the object look as if it has no real depth so using Move Tool (V) and the arrow keys nudge the shadow down a little.

Add a Gaussian Blur of about 5 pixels will soften the overall shadow.

Next as we have done before create a new layer and grab a selection from one of the Vector layers and fill with a dark colour sampled from the background. Transform this filled shape down grabbing the top middle handle and pressing [Shift] like we did before and press [Shift]+[Alt] whilst dragging one of the top corner handles to scale it down before releasing the Transform box nudge it into position and then hit [Enter] this will be a more solid shadow which gives weight to the globe.

Add a Gaussian Blur of about 5 pixels again and now the Globe sit perfectly into the scene. Play around with the positioning to your own tastes.

Finally in this stage we will add a reflection – now this is tricky but if you follow closely you’ll be able to do perfect reflections without having to flatten the whole scene.

First hide all the layers (click on the eye icon in the Layer Palette) except the two globe groups, create a new layer above these groups and press [Ctrl]+[Alt]+[Shift]+E which will merge all the visible layers into one layer as a copy this will be your reflection layer name it appropriately.

Switch the visibility of the other layers back on now and Transform Flip Vertical this layer and move the layer to below the shadow layers. Nudge it down until it sits in the right place for a reflection. 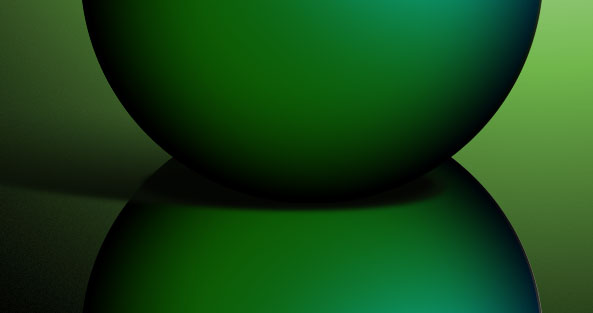 Change the Blending Mode to Soft Light and add a layer mask and apply a Linear Gradient (White-to-Black) to this layer mask to create a fall-off effects as with the shadow layer. 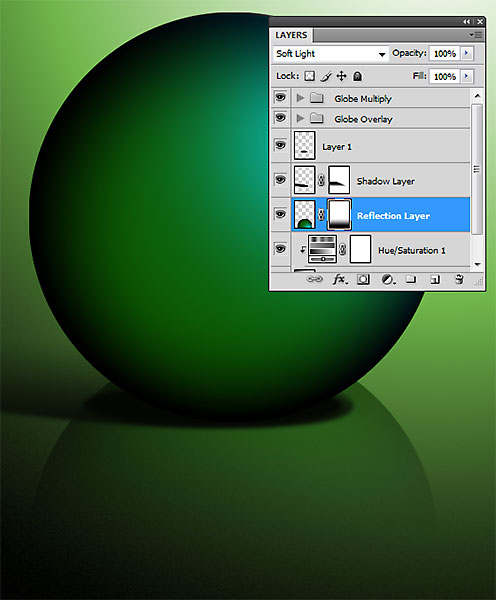 Okay everything looks lovely but unfortunately the globe isn’t as transparent as it should be so we will fix this by going to the Multiply Group and [Alt] clicking between the layers to clip them to the Vector Layer. 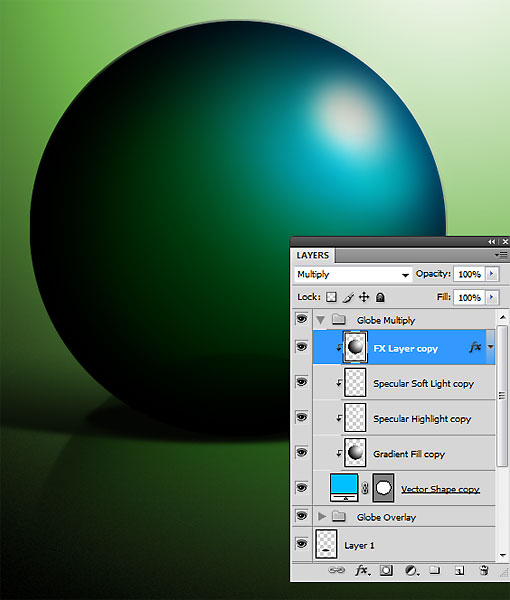 I hope you’ve enjoyed this lengthy tutorial – have fun.