This month I thought it would be fun to cover a Photoshop plugin that I discovered this summer, which has quickly become one of my favorites. Topaz BW Effects (from Topaz Labs) contains a wide range of creative presets that make it a snap to create some really interesting effects in a short amount of time. Let’s take a look!

For this tutorial we’ll use a close-up of some flowers which contain a sufficient range of tones, details and colors to be a good candidate for black and white conversion. The objective was to first blur out the flower at far left so that it doesn’t pull the eye away from the details in the center of the frame, and then use Topaz BW Effects to create something a little more stylized than your typical black and white.

To blur the flower , I started with the Photoshop Quick Selection tool (W)  to select the flowers in the central region of the image, and then create a layer mask, which I inverted from the Masks panel as seen below. 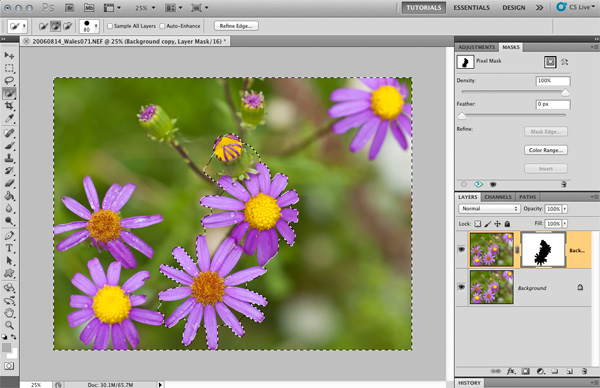 Use Photoshop layer masks to tweak the background details...

Next I selected the layer with the mask from the Layers panel, then chose Filter > Blur > Lens Blur. When the filter opened, all I needed to do in this case was ensure that the one flower at left was blurred a similar amount as the one below it, so that it blends in with the background. To do this I just selected the “Layer Mask” option under Source and turned the Preview on and off with the default settings to see the effect. Seeing that it was fine, I clicked OK to apply the filter. (Had the background of this image been more in focus to start, there are other settings within Lens Blur that can be used to selectively smooth things out.)

...Lens Blur can work with Layer Masks to accomplish this task.

Before moving on to BW Effects, I needed to merge the mask layer with the background layer so that the next filter was not applied only to unmasked portions of the image. To do this with your images, you can right-click on the layer with the mask and choose “Merge Down” from the bottom of the pop-up menu. The next step was to open BW effects by choosing Filter > Topaz Labs > BW Effects. The look I was going for here was one that emphasized contrast and details with some slight color toning. BW Effects has dozens of styling presets that can start you in this direction, but I chose the (Color) Toned Collection and within that, the Selenium V preset. 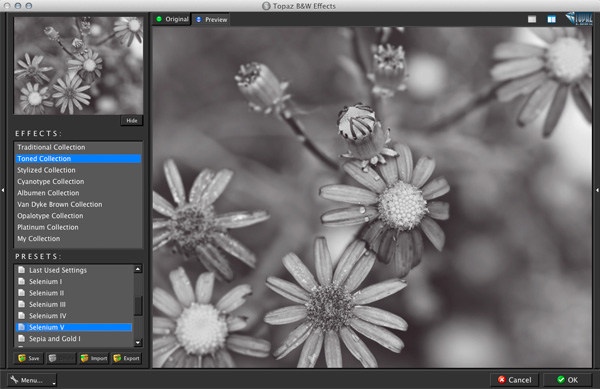 Selenium toning is a traditional print processing technique that creates varying degrees of brownish tones on the final print, from copper-like tones to more purple tones. The process works by converting metallic silver to silver selenide during the print developing process, when varying the chemical solutions used to treat the emulsified paper.

This preset gave me a very good start and got me close to the result I wanted. If you open the adjustment panels on the right side of the BW Effects window, you’ll see four categories of settings: Conversion, Creative Effects, Local Adjustments, and Finishing Touches. Each preset uses a different combination of the controls found within each of these categories. For this preset, we only need work with the Basic Exposure and Adaptive Exposure groups under Conversion, and the Quad Tone group under Finishing Touches.

Under Basic Exposure we have four controls, which if you’ve used Photoshop and similar plugins before should be more or less self-explanatory. For this shot I wanted to enhance the “punch” of the photo by increasing the Contrast. Note that with many of the controls in this plugin, a small adjustment can make a big difference, so go easy! I also adjusted the Brightness very slightly, and boosted the blacks to ensure a broad range of tones in the central part of the photograph. 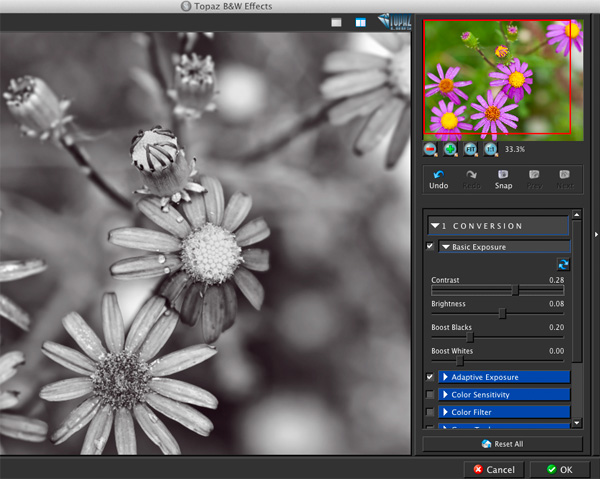 Next, under Adaptive Exposure, we have five settings to consider. Adaptive Exposure (yes there are two items with the same name – see below) and Regions work together to create pockets of localized contrast by brightening only certain details in the image. The higher the number of regions, the more global the contrast changes tend to be, but you’ll want to experiment because the process is not a perfectly linear one. Moving the sliders back and forth by small amounts can yield significant changes depending on your image. Protect Highlights and Protect Shadows work just as they do in other applications like Lightroom, making sure the brightest and darkest details do not clip to pure white or black, respectively. Details works a bit like a general sharpening control, while Detail Boost works like a texture (or small detail) enhancement control. 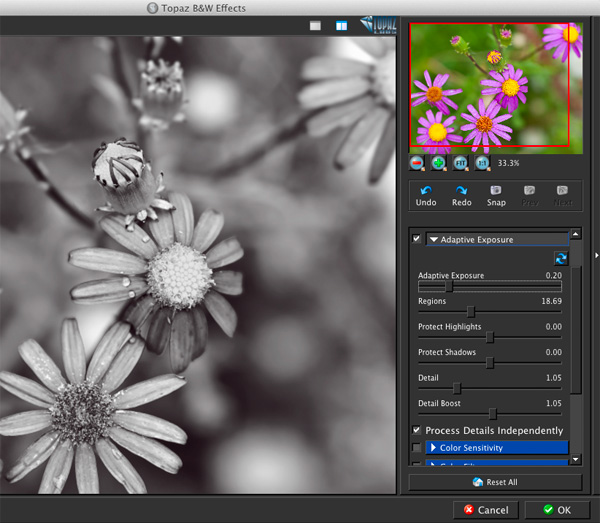 What needed to happen here was a slight boost in Adaptive Exposure to make the details on the flower petals “pop” a bit more, and to boost the Protect Highlights so that the details in the bottom left portion of the frame were reclaimed (not visible but you’ll see them in the final screenshot). Finally, I wanted to both smooth out and dull down the background a bit, while simultaneously boosting the detail on the subject (or at a minimum, maintain it). This was accomplished by dragging the Detail Boost slider to a value close to 0, and increasing the regular Detail slider value. You may want to zoom in when performing these types of operations to make sure that you’re not creating artifacts or other detail issues that will need to be resolved later. 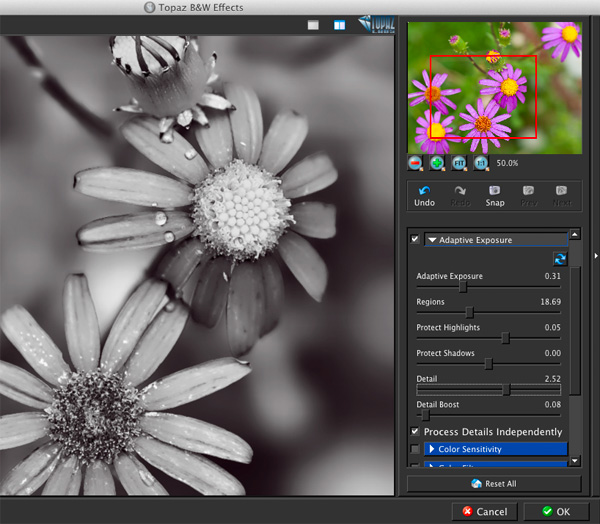 The final step was to work with the colors a bit, under the Quad Tone settings. Overall I liked the look of the shot but I wanted the reddish tones to be just a bit more prevalent, and a bit less blue. To accomplish this I modified the color used to tone the “Region 2” areas by clicking on the color swatch and choosing a slightly more copper color vs. the violet-like hue that was selected as part of the preset. Once this was done I moved the Color Region 2 slider value down to change where in the photograph this toning appeared. 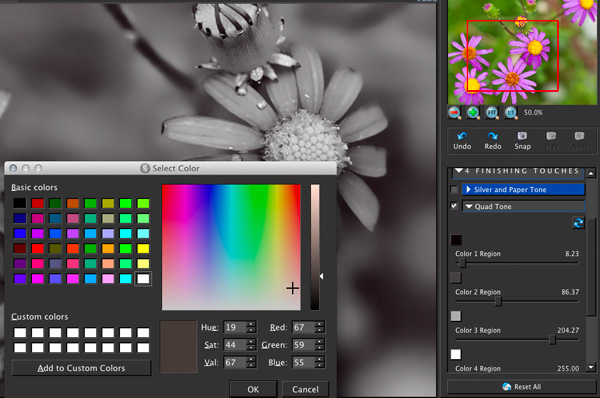 The Quad Toning options allow you to manage color toning in a precise way.

Below is the finished result, back in Photoshop. It’s both fast and a lot of fun to use this plugin! I recommend you download the demo and see if it works for your process. It’s quite a affordable as well, so I check it out. 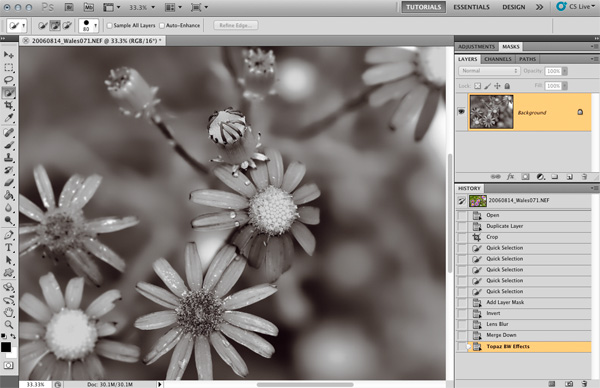