A lot of beginning designers seem to skip over the typography lessons until they get further into doing actual design work. About then is when something seems to hit them like a thunk on the head making them suddenly realize that they need to start asking some questions. And the first question that many designers will ask is: Serif or Sans Serif – what one for what occasion? And this is a fantastic starting point.

A lot of designers will tell you that it will be a personal preference or that they will just go with what “feels” right. And believe it or not, this is actually good advice. Going with your gut feeling can often lead you down the right path. But, it can take beginning designers a long time to learn to trust their gut because they have no real experience to use as a base for judgments.

So, for what it’s worth, here it is. My take on the typography starting point: Serif and Sans Serif fonts.

First of all, to define the two, a Serif font is one that includes protruding portions that extend beyond the main strokes of the letter. Examples of this would be fonts like Bondi, Century, Garamond, Georgia, and Times New Roman just to name a few. 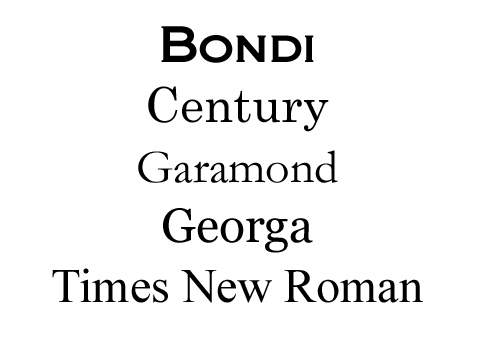 A Sans Serif font is one that does not include these protruding portions. Examples would be fonts like Arial, Futura, Impact, Myriad, and Tahoma. 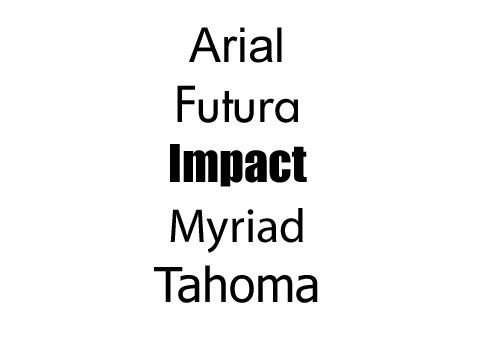 Now, when deciding which one to work with for your project, it’s a good idea to start out by considering Serif fonts as “fancy” fonts. Those little embellishments on every letter are just that – embellishments. Something to add to the structure of the letter. This being the case – Serif fonts can be associated with the words: classy, refined, expensive, and just basically more dressy. If those words also describe who your target audience is, then this is what you should choose. For example: It used to be that Times New Roman (a Serif font) was the standard for all article writing because that was a standard font found in newspapers. News is associated mentally with importance and seriousness – and so the font Times New Roman became associated mentally with importance and seriousness and that is why you will find it as the font of choice for the actual articles inside the magazines.

More:  Working with type on a path

Sans Serif fonts however come without these embellishments so this leads to them to be associated with the words: clean, without fuss, straightforward, and sometimes (although not always) inexpensive – which is why you will see them commonly used on magazine covers or on movie posters. If you want a font that is going to speak to the subconscious of the general public and make them feel comfortable instantly, than Sans Serif is your font. For example: The next time you are standing in line at the grocery store, take a look at the font of all magazine covers on display. Do this and I can guarantee that about 90% of what you will be looking at will be Sans Serif fonts. And this is a for good reason as magazines market to the general public. It’s a way of keeping the cover light and friendly so it can be used to draw people inside to where the seriousness, or “news” takes place.

However, if you are still confused as to which font to use and when, then there is a sure fire trick that will never fail. Pick one and stick with it for the whole of the project. Keeping with a unified font is always a safe bet. For example: Say you are a designer that wants to put a friends face on a fake cover of SportsIllustrated. The picture is in place, the title is rockin’ in true SI style, and all you need to do now is add some phony articles to the sides. Now the SI header is and always has been a Sans Serif font, so you can use that as your starting point and follow suit with all Sans Serif article titles. Another way of looking at it is, mimic what others have done before you got there and you can’t go wrong.

So, there you have it. A few guidelines to help you out in your quest for the right font for the right occasion.  At least until you can figure it out on your own and your gut instinct starts to kick in that is. 😉

The more eagle-eyed of you may have seen that Firgs was on the ‘Blog Roll’ from the very early days of TipSquirrel.com, so you can imagine how thrilled we are that she took the time to grace our humble pages, thanks Firgs xx

You can find more from Firgs On the web  and on Twitter.

4 Comments on Serif vs Sans Serif