First off, let me be candid. The thing that prompted this review…well, I got miffed. It started with my not being able to use my Perfect Resize 7 in CS6. I had to close CS6, open CS5, open the image, resize it, save it, close CS5, open CS6…I’m used to working in CS6 now, and CS5 feels wrong somehow. Anyway, it was getting a little old. So, I wondered, is there a new version of Perfect Resize that I can upgrade to that will work in CS6? Well, actually, no, there’s not. I have the OnOne Perfect Photo Suite 5.5; the Perfect Resize included is version 7.

There is a new Photo Suite, version 6, but the Perfect Resize is still V. 7. Over time, I’ve found I rarely, if ever, use the Photo Suite, except for Perfect Resize (PR[i]). Since it’s in the Suite however, I’d still have to pay $70 (they do honor the upgrade price from the suite to the individual software, plus for them) for the exact same version. For that amount of money, I’ll continue to open CS5 thanks so much. Anyway, although I understand the logic behind the whole thing, I still think if a bit of software is the exact same version, the company should just give you an upgrade. I know; it’s the unreasonable rebel in me. I started thinking ahead, to the next version of Photoshop (PS), when I wouldn’t want CS5 on my system anymore. What was I going to do then? Well, I could, of course, just buy a new copy of PR, either now, or perhaps try to anticipate when the new version of PS would be released and hopefully still get the upgrade price. Or I could see what’s out there besides PR. This is radical thinking for me. I’ve been a Perfect Resize junkie since PR was Genuine Fractals and OnOne was an itty bitty baby company! I didn’t even know what was out there to compete!

Unsurprisingly, there are quite a few competitors out there to check out. I initially decided on the “big two”, OnOne’s PR, of course, Alien Skin’s[ii]  Blow Up 3 (BU), and also the resizing engine inside PS, for good measure. A late entry to the race was a little known (speaking for myself) offering from BenVista Ltd.[iii] called PhotoZoom (PZ). I decided to keep it to these few for the sake of time and space with an eye towards later, perhaps, extending it by a few more examples, including some of the free offerings out there.

Test One – The Little Puppy 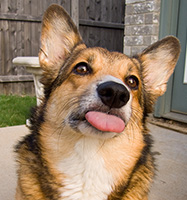 My first sample is a small, low resolution image (2.5 x 2.75 inches, 72 ppi.).Now, I’m not advocating going online, grabbing low rez images and blowing them up for your use. That’s stealing, unless you have permission, so please don’t. That being said, I’ve had people bring me copies of family images given to them by other family members, perhaps from a long distance away who didn’t know how to use a scanner, perhaps from a long time ago, that were small and low resolution, though not usually that low,  who wanted a larger copy, occasionally somewhat unreasonably larger. Moral of the story, these things happen. (By the way, anyone who’s seen my Facebook icon or my Corgi, Harleigh, knows this is my image.)

I ran the first batch of enlargements at 200%, with no setting changed from the defaults.

They all look pretty good, it’s only 200% after all, and they’d better! 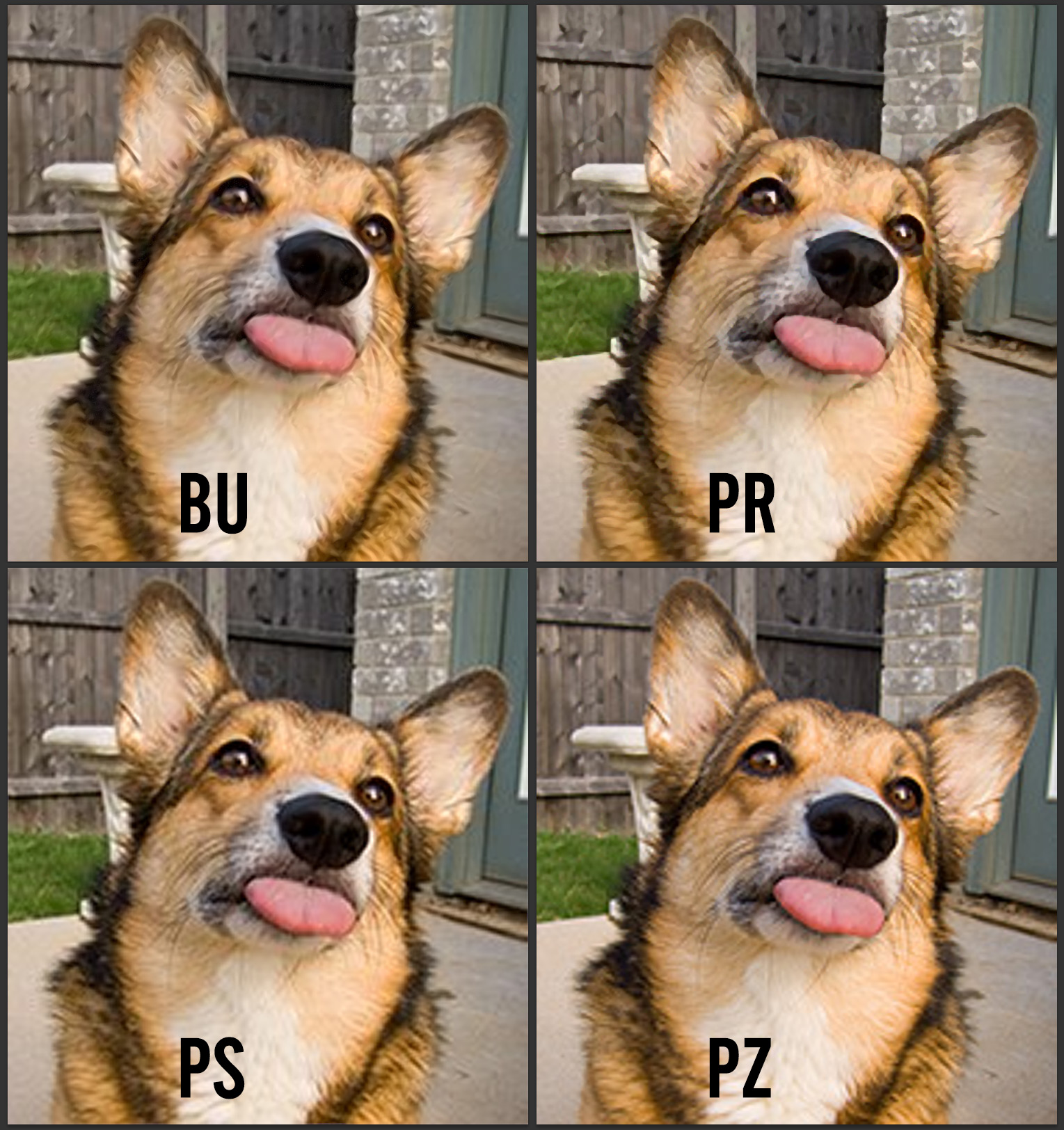 They’re still looking good, although I see some more sharpening on the BU & PR samples, especially around the nose and eyes. This is very slight, mind you, and may be mostly caused by my staring at the images too long. 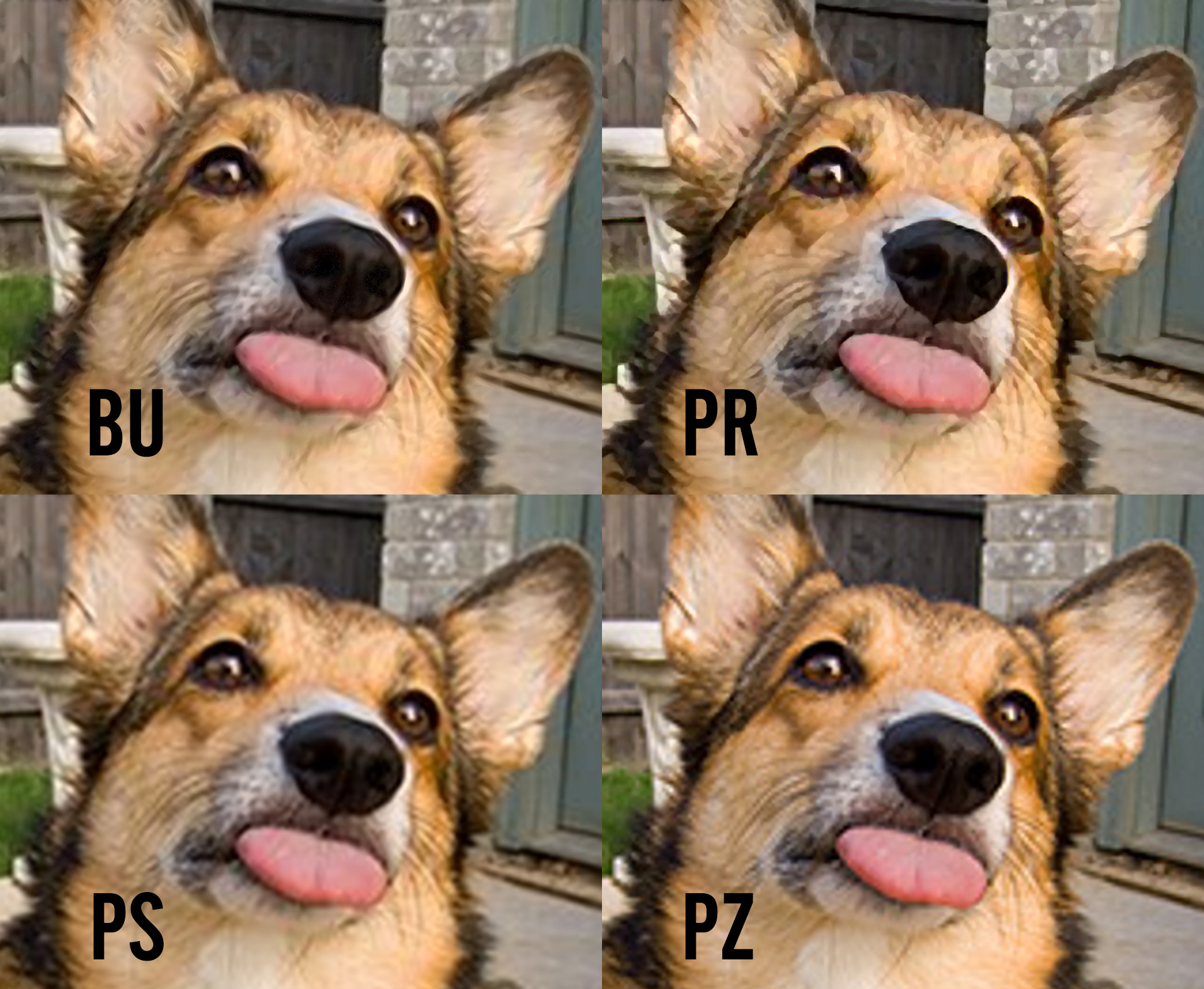 In this set, PR sharpening has gone to a place I don’t love. I call this sort of look “icey” or “chinkly” – both technical terms, mind you. Ok, they’re actually ways to say what I don’t know how to say, but I know I don’t care for it. Some people do, though, so to each their own. I’d rather my sharpening was less “chinkly” and more smooth. Usually when enlarging, though, smooth means softer, or blurrier, which is where PS is starting to go. Landing in the middle are BU and PZ, with BU being a tad more on the sharp side and PZ on the soft side. These two are my picks for the winners of this contest, with each one having defiant pros and cons, for instance, the nose on BU is a little darker, with PZ retaining a bit more detail, while BU keeps things like the whiskers sharp. They’re a bit pixelated on PZ. 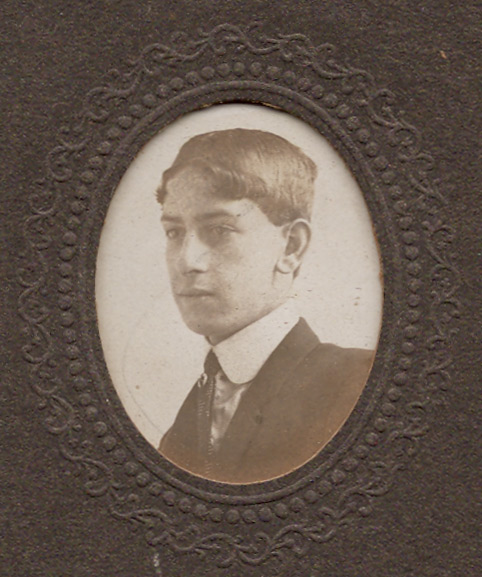 This test is on an even smaller photo, 1.5 x 2 inches, but scanned at a higher resolution, 300ppi. I wanted to include an old photo, because that’s what I really care about. There may be other criteria for photographers, but my main objective when enlarging an old image is to keep it as crisp and clear as I can. It’s okay if I need to go back and sharpen it up, a little, with HDR Toning, but I need it to stay nice and clear. 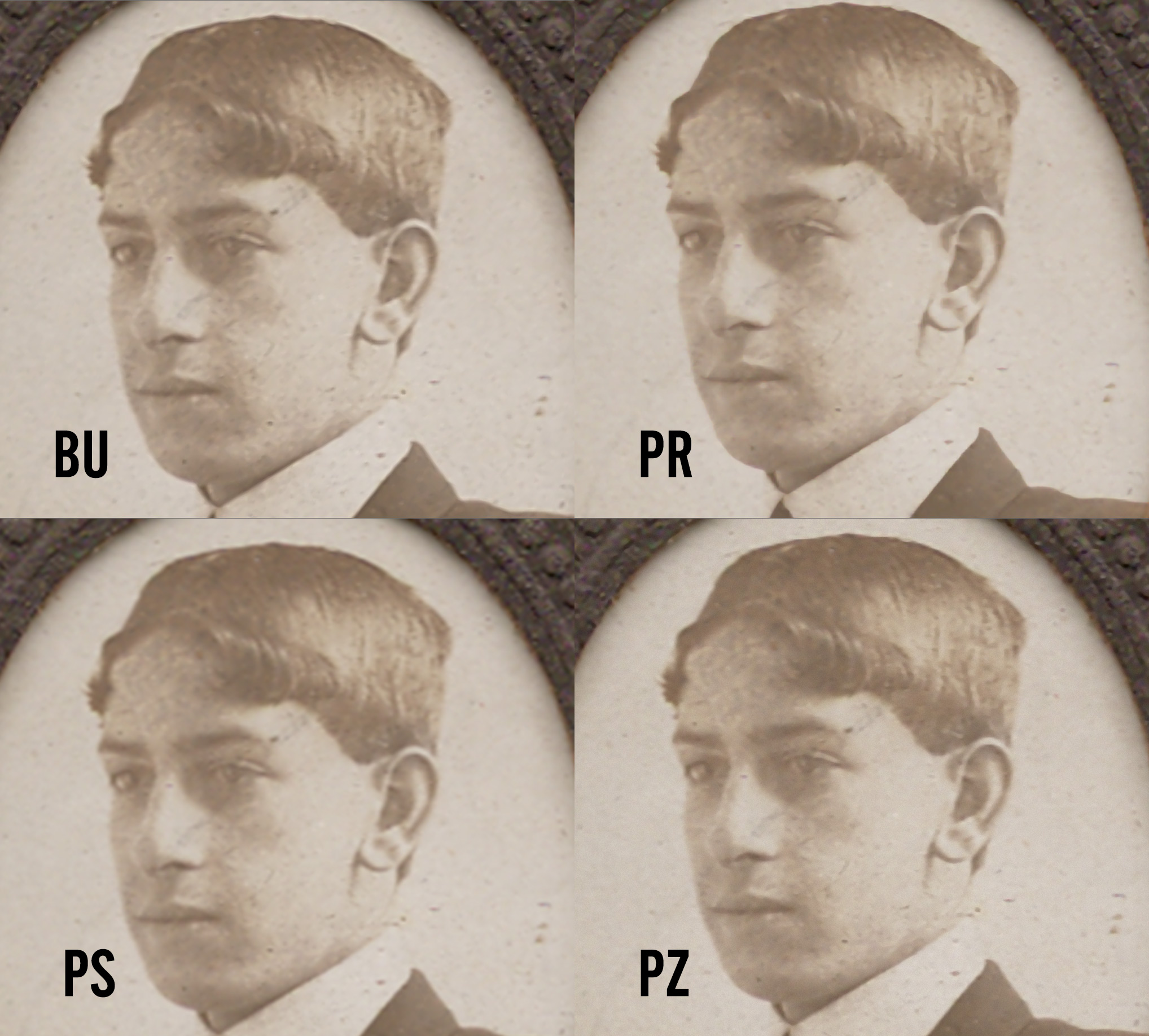 These all look pretty good, with PR looking the sharpest, tending the tiniest bit towards “chinkliness”, and PS, the softest. Next I went all the way to 1000%. No messing around, here! 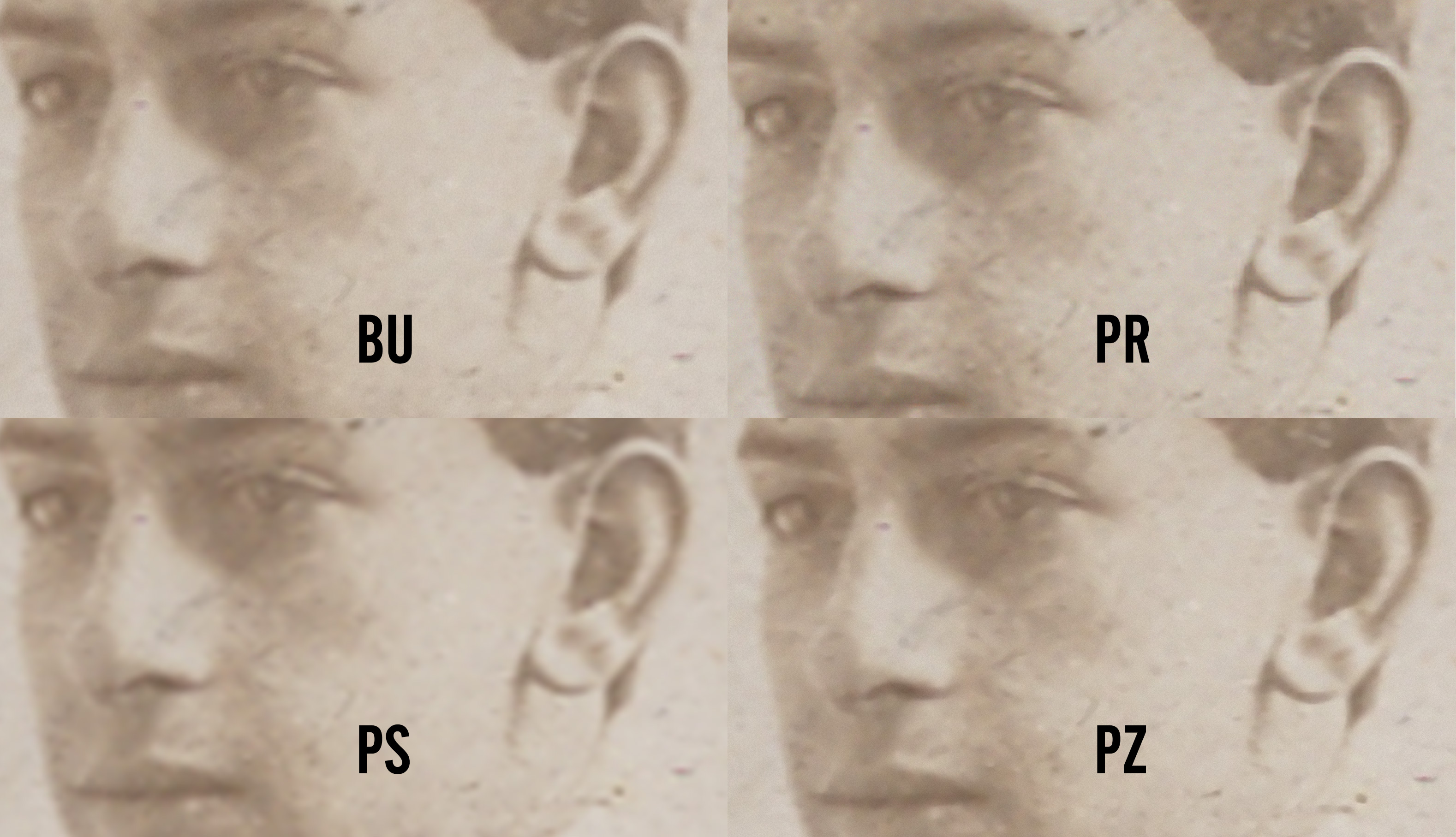 I was a little surprised at how well all four handled this one! Again, PR tended a little more to the chinkly sharpness and PS was softer and blurrier. PZ was also fairly soft, though with a decent sharpness around the edges. BU had a little less softness than PS and PZ and less sharpness than PR. I think BU won this one by a slight margin.

Again, I was a little taken aback by how well all the products handled these tests. If any  were better, or worse, it was by the slightest margins, and, I have to say, completely up to the preference of the viewer. I know which looked better to me and worked better for my needs, but you may feel very differently! Since the results  were so close, I decided to  do one more little test.

Is user interface important to you? Can it be the deciding factor when performance is too close to call? I think it can be a factor, especially if you can’t figure out how to use software, or if one has some really cool feature that you’ll really use that others don’t. 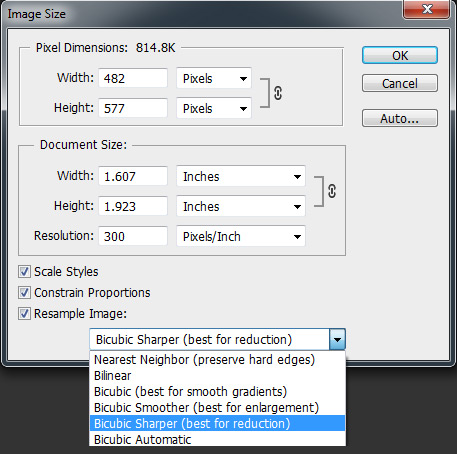 Well, that was special! What can I say? It is what it is. It has six basic resize methods and areas for changing pixel dimensions and document sizes. In the con column, the PS resize engine is it tends towards soft and blurred. Be sure to try all the resize methods to see if any work better than the others for you. The pro is that it’s free and already installed. Again, it is what it is.

Next the Perfect Resize interface. 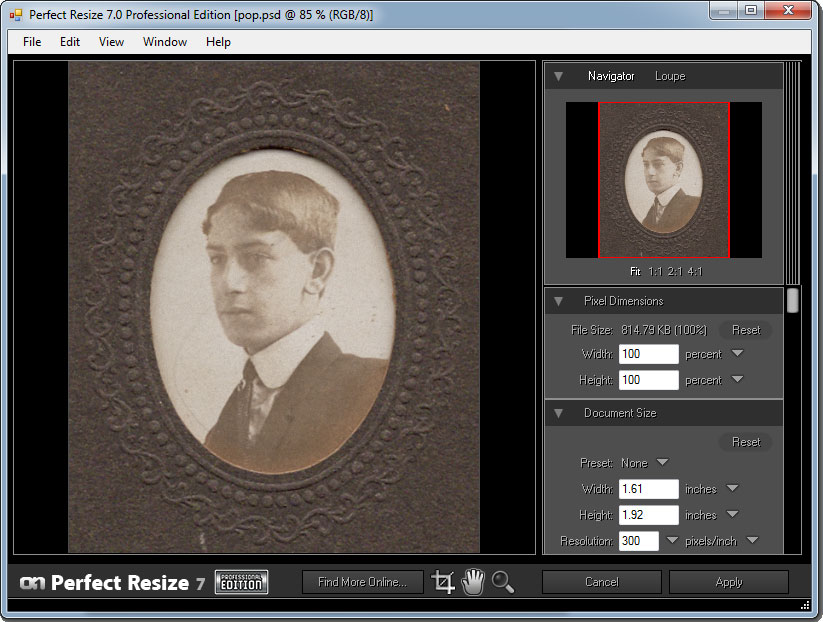 I’m used to the PR U.I., so I like it. It gives you a lot of options over and above the ability to change pixel dimensions and document size, like texture control, sharpening and film grain. What I really like in the PR U.I. is how it’ll prepare an image for gallery wrap printing. Cons of PR? Well, my initial gripe of not allowing a free upgrade for the same version notwithstanding, I’d say that it was still a darn good program! In my tests though, this being my own opinion, it came in third, so maybe not the software for me, after all. Upgrades on both the standard version and Pro is $69.95, otherwise, standard is $99.95 and Pro is $199.95. Pro is what was used in this test, in case you’re wondering. 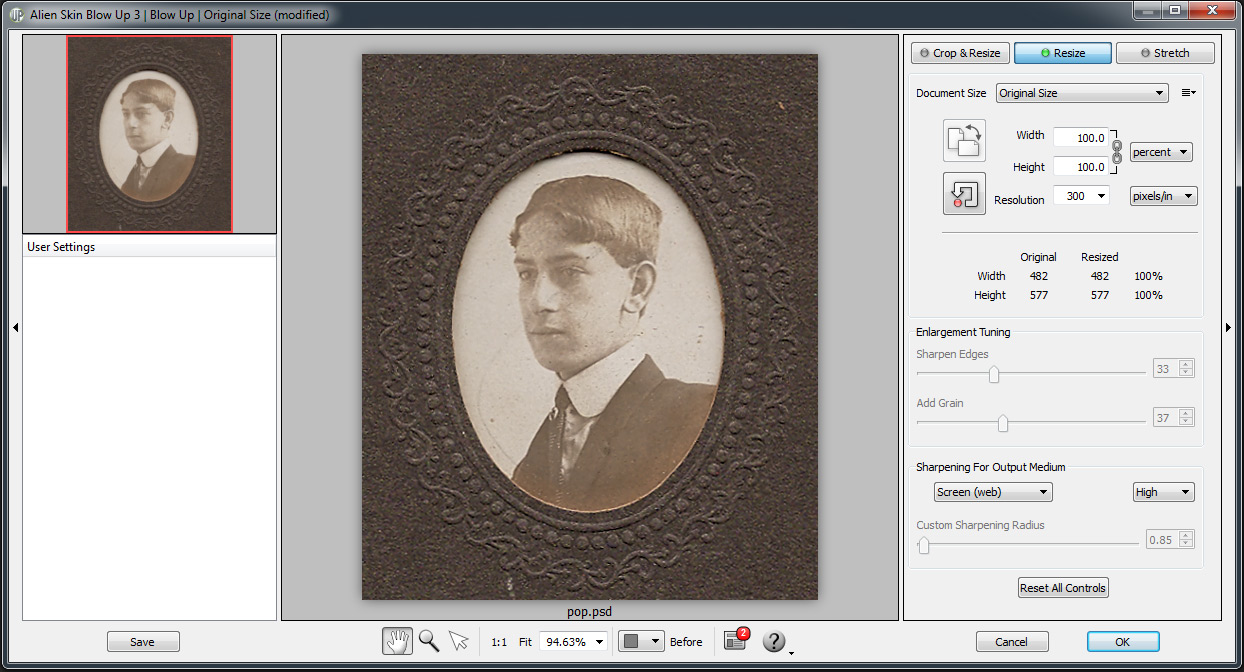 As U.I.’s go, this one’s pretty basic and clean. It’s fairly easy to figure out and it allows you to choose which output medium you’re enlarging for, like the web, or what type of paper you’ll be printing to, and also the quality, low, medium or high. It’s another way of giving you presets, but I like the options. It also has sliders for fine tuning the sharpening and film grain. Cons? Maybe that BU doesn’t have quite as many bells and whistles as PR, but that’s not necessarily a bad thing. Pros? AlienSkin will upgrade your software when a new version of Photoshop comes out. How nice is that? There’s no standard / pro version, only one and it rings in at $ 199. Blow up ranked in the top two for me, with a slight edge over Perfect Resize. 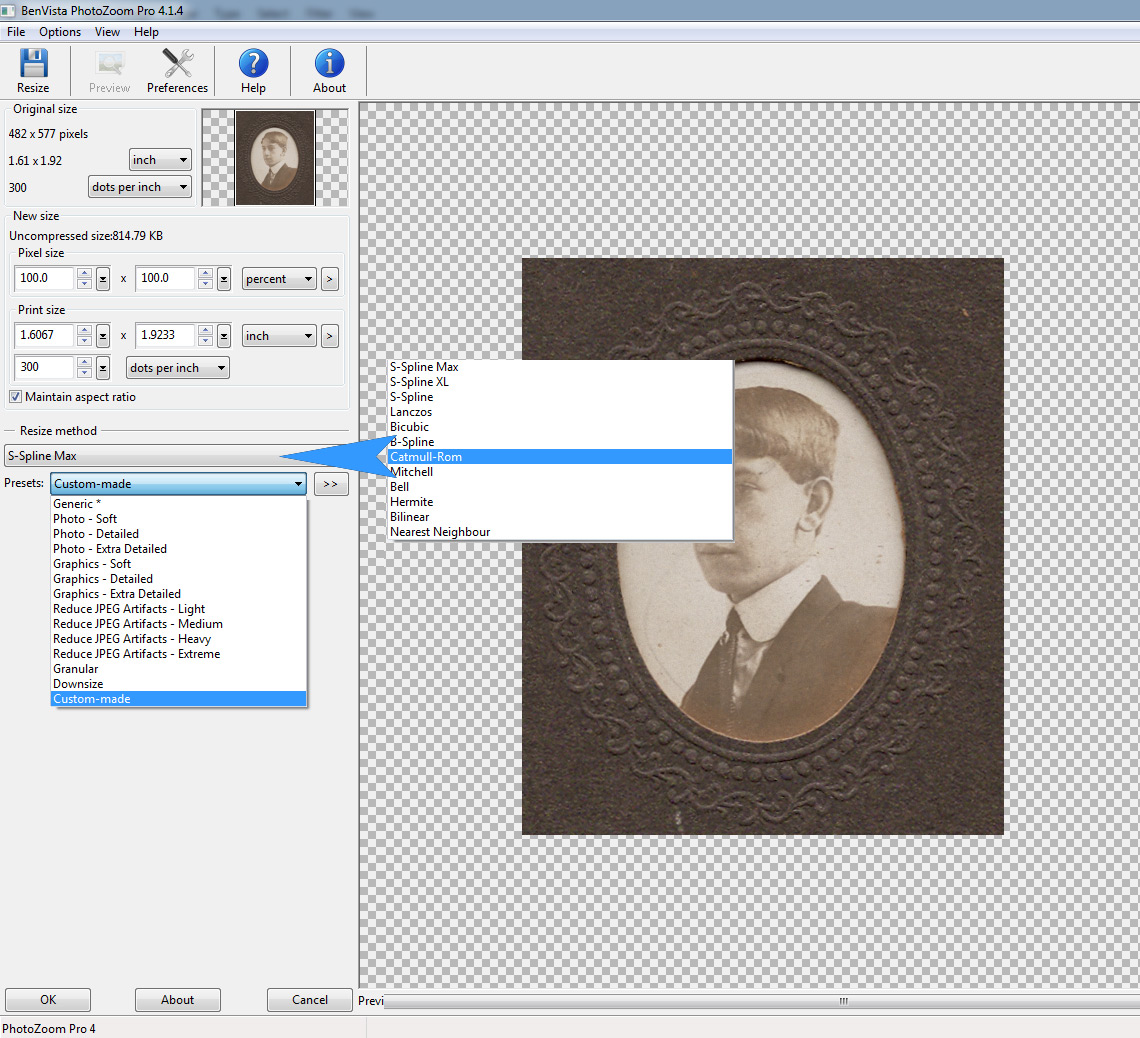 Ok, I have to tell you, this one I love! The U.I. is easy to figure out, it has a LOT of presets to choose from and on top of that, they really work, so be sure to try all of them! It takes up the whole screen, so you can really up the zoom on your image to see what’s going on. Cons? I haven’t really found one yet, except that maybe the cost of the Pro version is $219. It’s completely worth it, though, I think, for all the presets and features. Some presets are available in the $99 Classic version, of course, but not nearly as many. On the plus side, well, it does a really nice job!

PhotoZoom and BlowUp were the top two across the board, for me. Each have their strengths and weaknesses, but both are wonderful at what they do. Keep in mind, these tests weren’t long term using many images. I’ll be using both PZ and BU in my every day work on the same images for a little while, yet, to see if I come up with a really clear winner.

[ii] User license was provided by this company for the purposes of this review.

[iii] User license was provided by this company for the purposes of this review.

[iv] The image was enlarged from its original size every time.

9 Comments on Resize Software – A Retrospective