[Authors note: The image used in this article is not the image referred to in the story, but another where the face is nearly, though not completely, obliterated.]

A potential client called me this past week and asked if I might be able to help her. You see, she’d thought to clean an old photograph of her great grandparents and ended up “cleaning” the faces right off her ancestors with window cleaner and a cotton swab. If there was anything, even a faint hit of the facial features left, I might be able to do something, but if not then unfortunately, unless she happens to have another photograph of the people in the image that I can use as reference, this is one type of damage even I can’t fix.

When it comes to the faces of loved ones in old images, you really can’t make something out of nothing. But what, some of you might ask, about drawing or compositing? 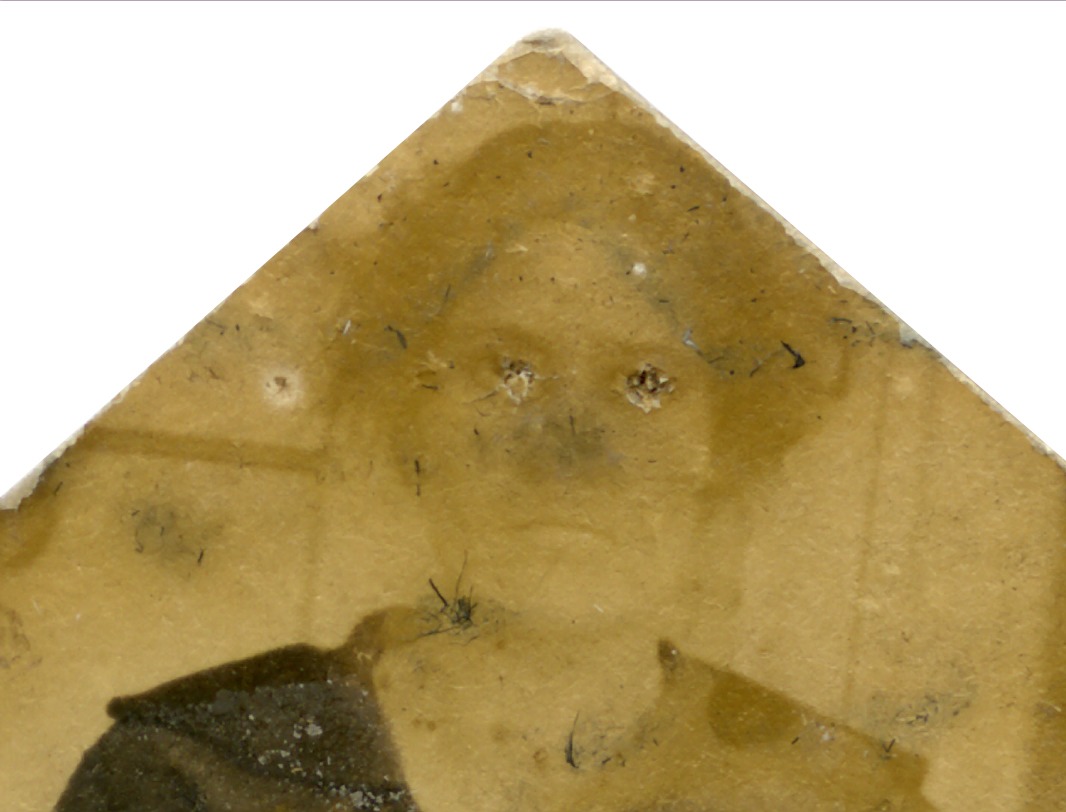 To Draw or Not to Draw…

The aforementioned potential client actually wanted me to draw the faces back in and was fairly insistent that I do so. “I’ll tell you what” I told her, “drawing a face, or any other missing piece of a photograph is almost never a good idea”. I say almost because there may be one exception; if you are a complete master, and by master I mean master of photorealistic drawing like Bert Monroy or Linda Huber , you might, just might get away with it. Anything less and it will look like what it is, a drawing in a photograph. Let me be frank about this; it will look bad. 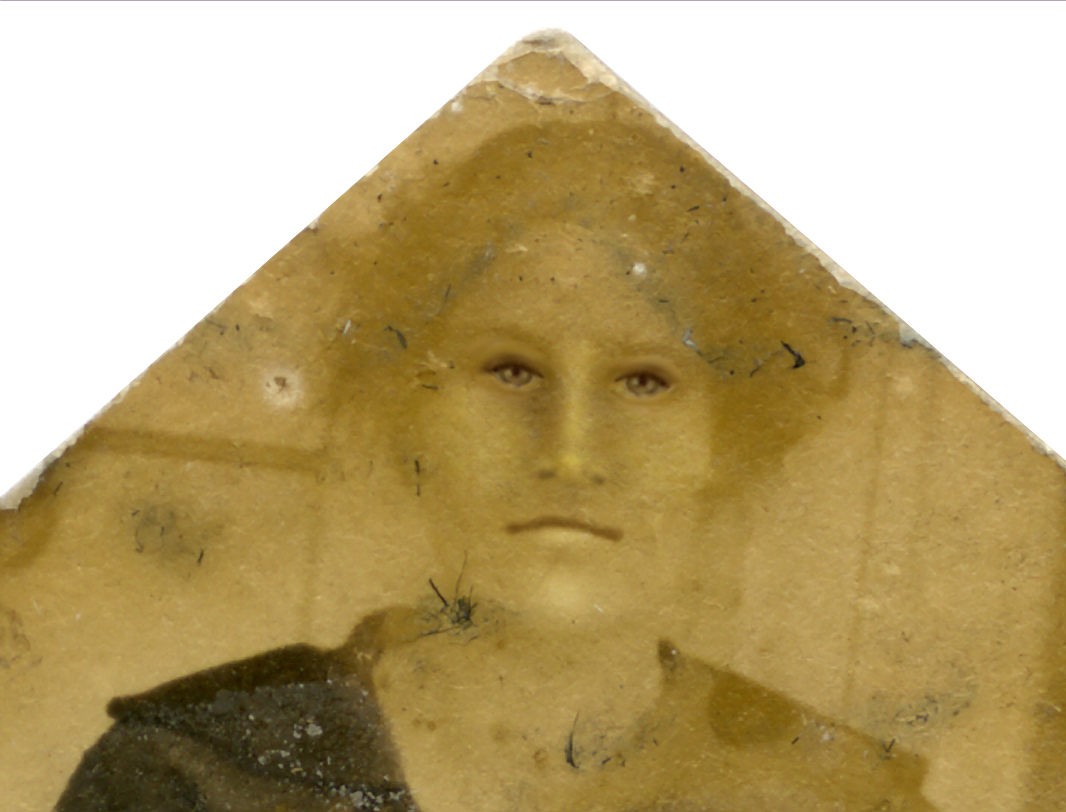 Compositing might be a better option provided, again, that you are very, very good at it. Compositing like digital photo restoration and drawing is an art. It takes skill and talent to put a new piece into a photograph and make it look like it was always there. It’s something that should be done sparingly and with responsibility, and if you can’t do it well you have no business doing it (for clients) at all! I’ve seen enough floating heads, contortionist’s limbs and paper doll cutouts on new backgrounds to last a lifetime and more thank you very much, but that begs another question: Even if you can do it well, does that mean you always should?

Perhaps, if we’re talking bits that aren’t readily identifiable like a foot or an arm it’s acceptable if, big IF, you have exceptional compositing skills (I know I keep saying that, but I’m just throwing it out hoping some of it will stick, you understand…)! It’s also fine if you have other photos of the subject from which to borrow the composite materials from, providing you don’t just stick a face onto the other image without any thought to shadows, distortion, orientation and a whole host of other factors. If the photo is of close kin, identifiable to the viewer (as opposed to nameless unrelated faces in a mass sitting, a group photo like a class picture, for example), you should never use random faces for your composite no matter how good you are. Why? Well in a nutshell, “that ain’t my grandma!” 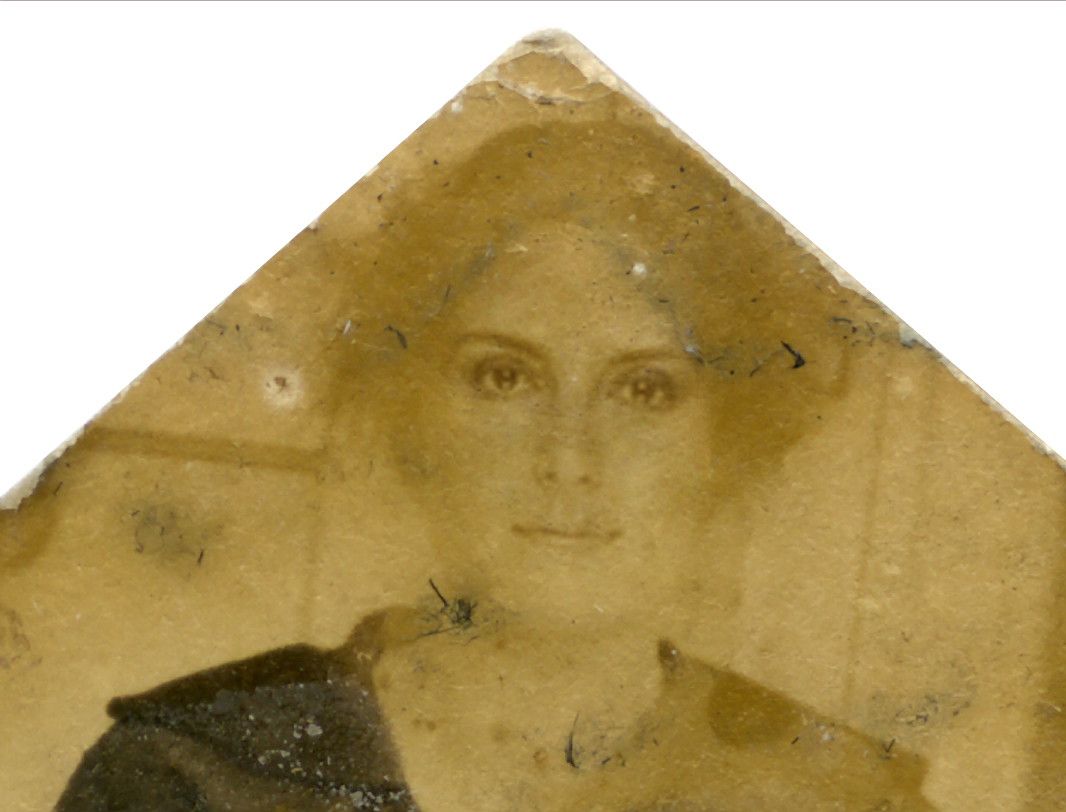 It’s never a good idea to composite a face just for the sake of compositing a face on someone’s ancestor. If you do, it’s not going to be their ancestor any longer. No matter how pretty, how well done or how awesome the image is when you’re done, the object of fixing a photograph of someone is so that if someone who knew that person could look at the photo and say “That’s so-and-so” or at least “That looks like so-and-so”. How will that even have a chance to happen if you paste Brad Pitts face on Gramps? 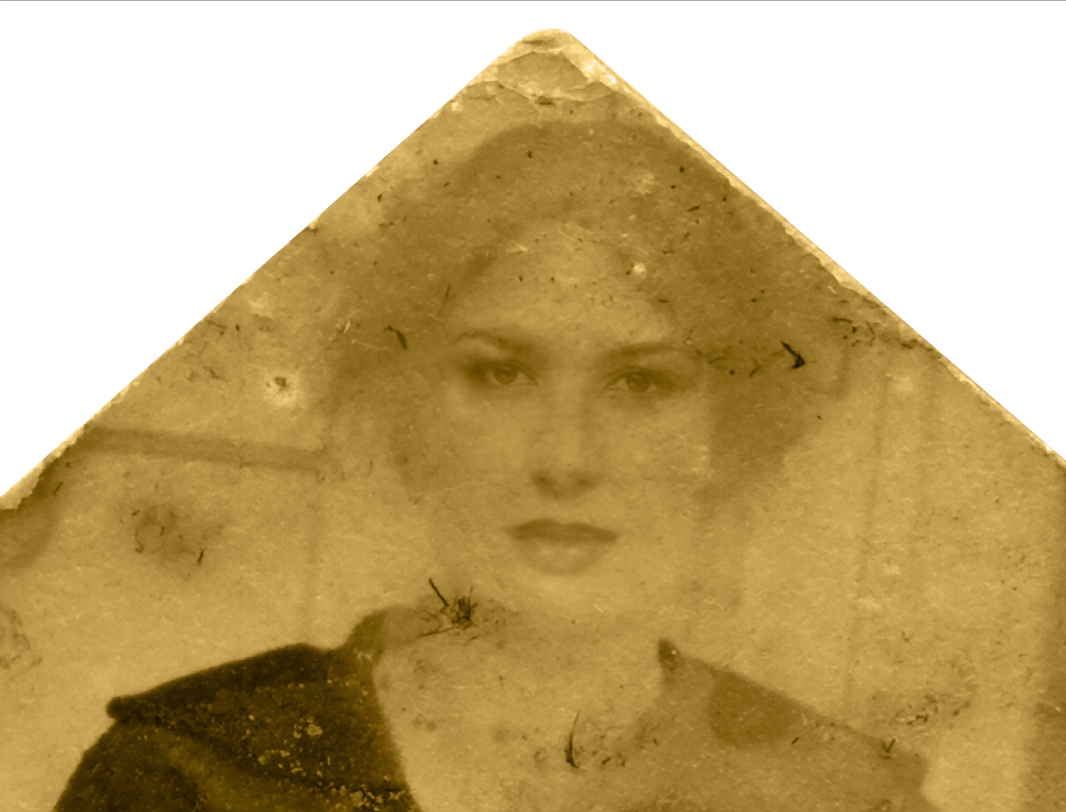 There are ways you can get away with a bit of compositing here and there, though, if you’re very careful and just composite pieces, an eye here, a part of a nose, there, that match the general shape of the missing piece. You’ll need the use of tools like Transform and Warp to move bits around to match direction, size and shape as close as possible. You can also use bits taken from descendants who are known to resemble the ancestor in question. These are very advanced options, though, and shouldn’t be undertaken by the fainthearted!

If there’s anything left in the image, anything at all, you may be able to pull a rabbit out of a hat and save the day…or not. I don’t want to raise any false hopes, but it’s always at least worth a try. The first thing you need to do it evaluate. With the image open in Photoshop (I’ve never attempted any of the really tough stuff in anything but PS, so I can’t say if any other program would do as well, so won’t recommend any.), zoom in on the area with the “lost” information. Try the normal methods of bringing out information, Curves, Levels, Channels, etc., to see what information is left; not to keep, necessarily, but for evaluation purposes. In the image below I found a little more of the basic outline of areas in the Blue Channel, enough to get an outline of the eyes and the area of the nostrils. The mouth is faint, but visible. 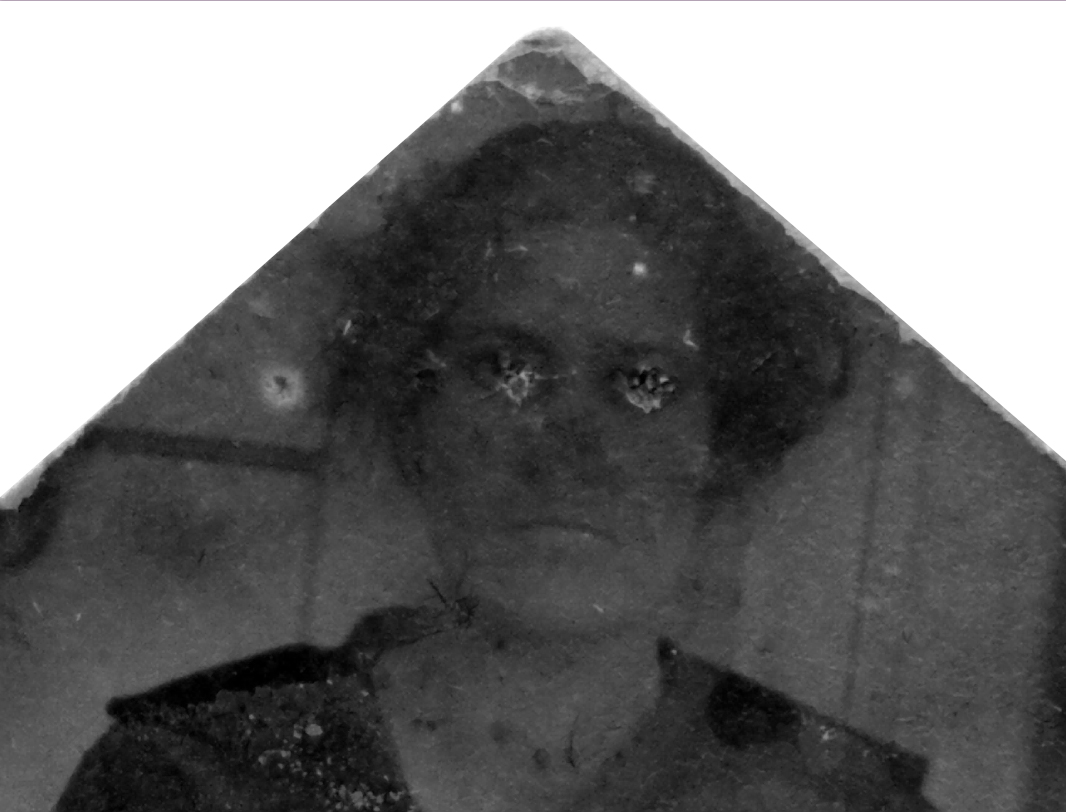 I drew a crude outline around the eyes and marked the nostrils on a new, blank layer, to give me a rough idea of the position of things. 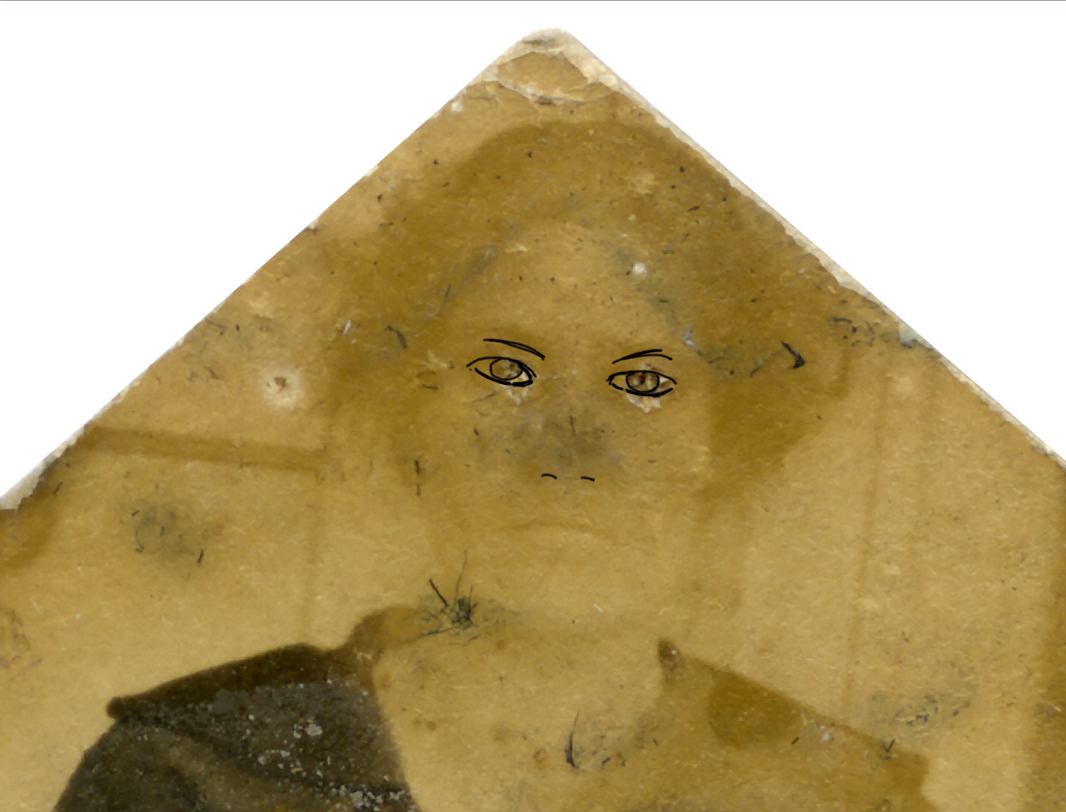 Now, zooming in very close, I begin to repair the existing pixels, filling in areas such as the pupils, as I go along. 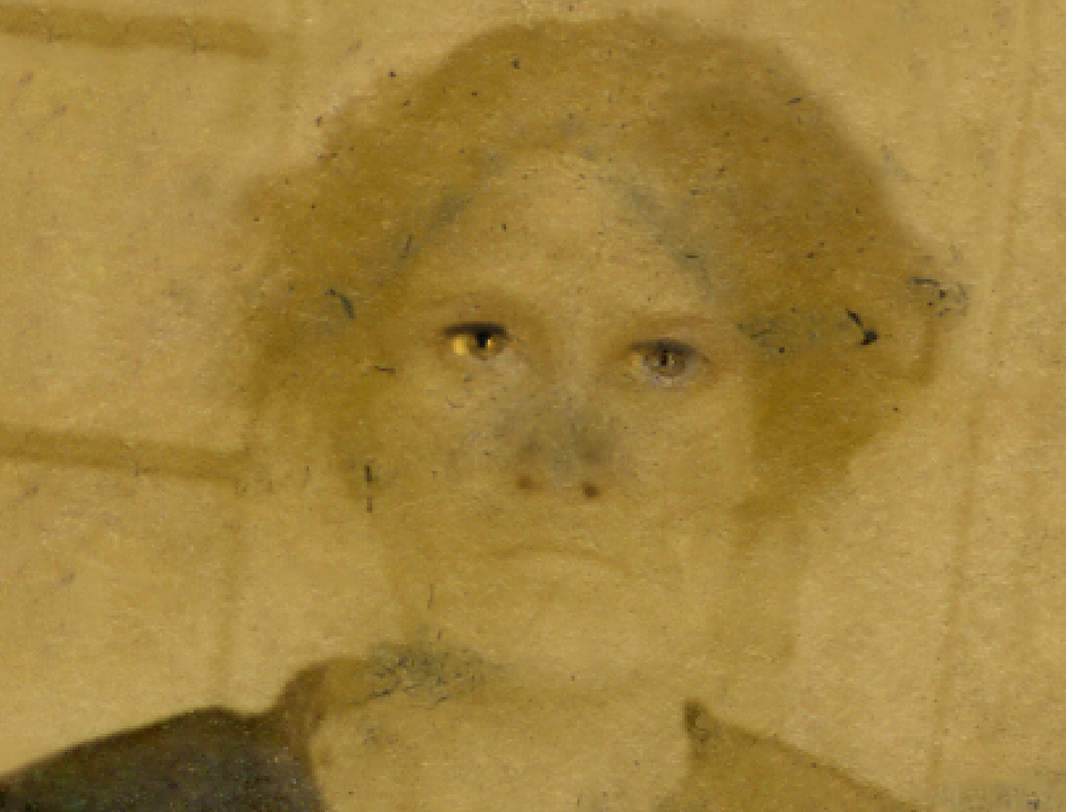 Instead of line drawing in things like a nose I make use of Curves to use darks and lights to “draw” in features. A line of lighter tones down the dorsum, or bridge, of the nose, the lower lip and places that protrude out in a face, will bring them out. Darker tones go in places that either recede or are in the shadow of the distending areas, such as the ala (the flared out area over the nostril) or the philtrum, the area between the center of the upper lip and the nose. This is sort of painting with light, only not in a cheesy Thomas Kinkade-y kind of way… 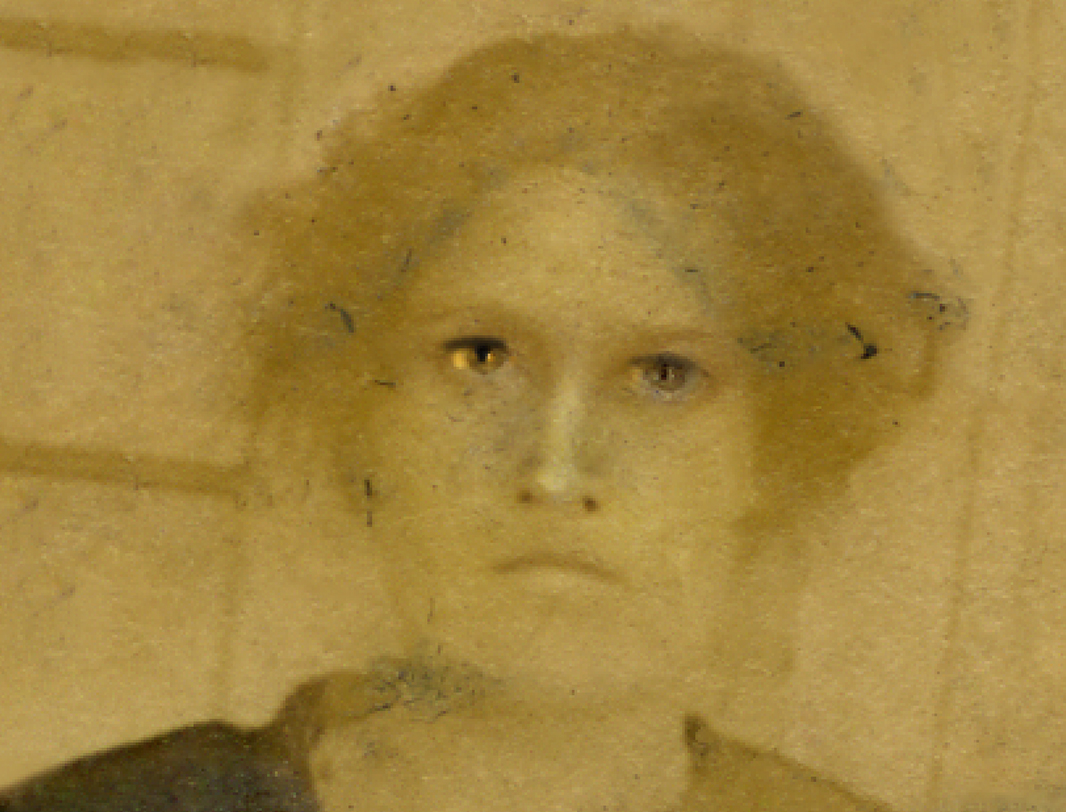 Keep refining the light and dark, using multiple Curves levels. A couple of tips for these layers:

Remember to check occasionally with the layer where you sketched in the general outline you could see. 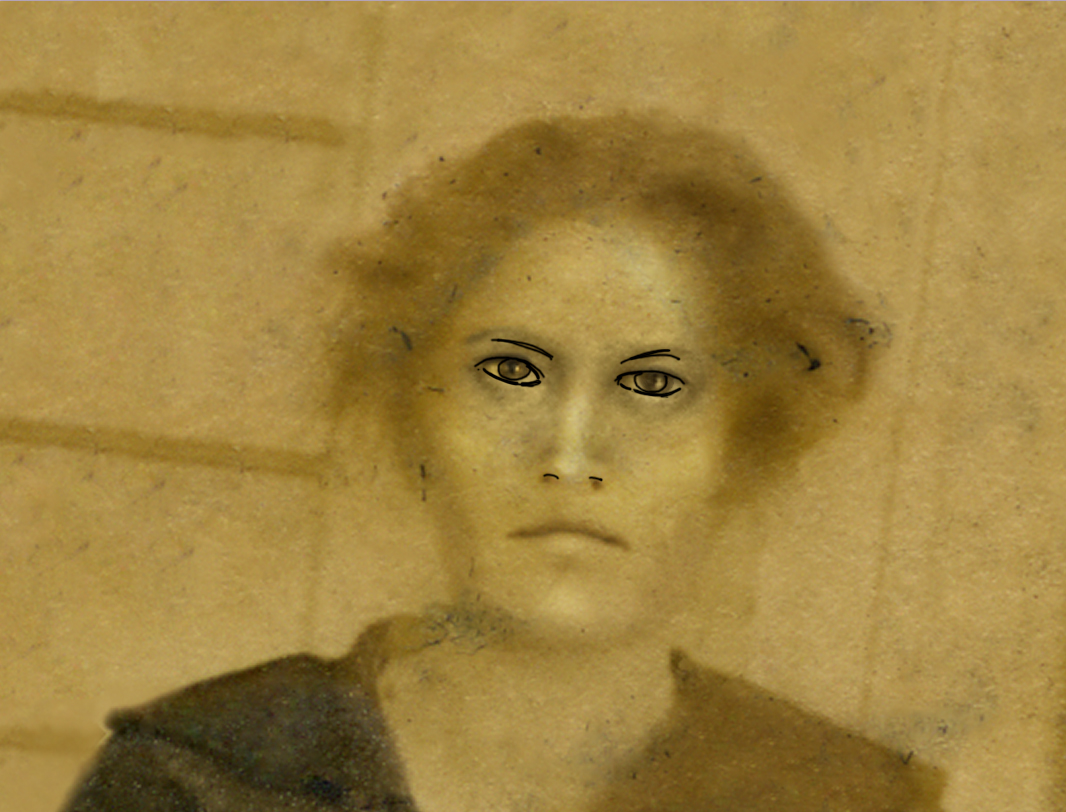 The finished result may not be a pretty as say, a good composite of a different face, and it’s far from “perfect”, but at least it’s made up of, basically, pieces of the original face, in the places those pieces should be!

Remember, these are projects for the very advanced, especially when dealing with customers, but restorationists of all levels should try it, and keep trying! Look for people you trust to critique you honestly, not just tell you how good it is to spare your feelings. Doing this sort of repair is a great way to grow your skills!

6 Comments on Rebuilding From (Practically) Nothing