When I look back at all the things I didn’t do in my life because math was involved, it makes me shudder. I didn’t go on to attain copious amounts of higher education and strings of alphabet soup after my name because everything involved, somehow, math. I didn’t maintain high bank account balances – I did learn, however, albeit the hard way, that the money taken from a bank account via an ATM card still must be accounted for. Drat…Math. I just didn’t get it. To add insult to injury, I had a certain math teacher (Mrs. Barrons, I’m talking to YOU!) who couldn’t be bothered with kids who just didn’t get it, spending her time and energy on the kids who did. Plus, at that time I thought math was about as useful as gooseshit on a pumphandle. Of course, I know now that if I’d just applied myself to learning math the way I do any other little thing that takes my fancy, I could have been ruling the world by now. Alas, since I was, at that time, apparently dumber than a box of owl poop, I do not rule the world, and mathematical concepts still tend to intimidate me.

That’s pretty much how that went. I mean, seriously! CALCULATIONS = MATH, right?

In my opinion the name “Calculations”, in and of itself, is the biggest drawback of this really awesome tool. All joking aside, I think if the folks at Adobe had called the thing “Melvin” there wouldn’t have been nearly the confusion over it. The name is daunting to those of us with Math Phobia, but the command itself is just nifty!

Even when I began to understand that Calculations might actually be a feature I could use in my work, I just wasn’t getting it! I watched training videos, read articles, asked people to explain…it just wasn’t getting through. For some reason, even the explanations were coming across as somewhat mathematical therefore they were bypassing the connection in my brain that would allow them access into the inner sanctum of my cerebral cortex. Until the day Deke McClelland was guest-blogging on Scott Kelby’s blog and the clouds parted and the sun shone through! Ok, it’s July in Texas and there hasn’t been a cloud in the sky since early June, but metaphorically, you know?

I’ll say right off the bat that Deke’s tutorial was dealing with Calculations as a masking tool. I think as a tool in photo restoration, that alone can be invaluable. But then I also started looking at the other use for Calculations for me, as a restoration artist. Just what is that, exactly? Well, literally, it is what it is! Calculations is a Channel Blender! I see three main areas, so far, in which Calculations can benefit photo restoration. Analysis, channel blending and masking. Remember, since Calculations only work in RGB mode, always scan your photos, yes, even the black and white ones, in color! Calculations aside, it should be a part of your restoration workflow, lest you severely limit your repair options!

In case you’ve never seen Calculations, have absolutely no idea what in the world I’m talking about, you’ll find this little gem in the Image menu. Image > Calculations…and this dialog box will appear.

You’ll have the ability to blend different sources, different layers (I confess, up to now I’ve only experimented with “Merged” layers), and any two of the Red, Blue and Green channels. You’ll have the ability to invert one or both of the channels .You’ll also have at your disposal all of the familiar blending modes as well as two new ones: Add and Subtract. Then you can decide whether to make your blend into a new document, selection, or a new channel.

Regarding analysis, Calculations is a great way to take a photo, for instance, that’s so faded it’s not immediately clear what is even in the picture, and determining it’s chances of restoration. In the example, below, from my families personal collection, I could see a couple people and had a good idea one was my grandfather, but wasn’t really clear about the entire composition. After filtering it through Calculations using the green and the blue filters (the red was almost totally shot), I can see it’s my grandfather standing next to my grandmother, with her holding up her hand to show off her wedding ring. Since she’d probably only being doing that at the time of her wedding, not only do I now know for certain it’s my grandparents in the photo, but I also know the photo was taken in 1921. My mother was also thrilled to see her father was smoking his pipe in the photo, which is how she remembers him best! 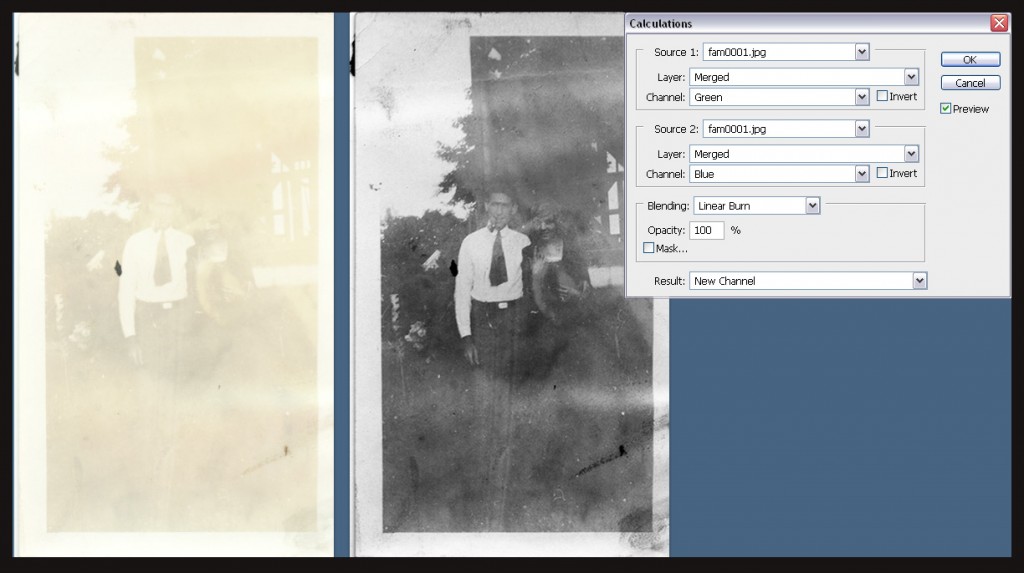 By using calculations as an analysis tool, I determined in less than five minutes that, yes, this photo could be restored, given time and a lot of patience, and that it would very much be worth it to my family.

Over the next couple of weeks, I’m going to go over the two other photo restoration worthy benefits of Calculations, channel blender and masking tool.

2 Comments on Do The Math