Here’s a nifty little tutorial for you. I’ll show you how to add a little extra to your photos with a quirky shadow that can represent the person photographed. I’ve used this a few times with clients and they love it! I’ll just point out first of all the much like over-processed HDR, what you like as a pro and what your customer likes are often wildly different things and this one is an absolute winner when it’s pitched right!

Here’s a couple of examples of photos I’ve applied a shadow onto:- 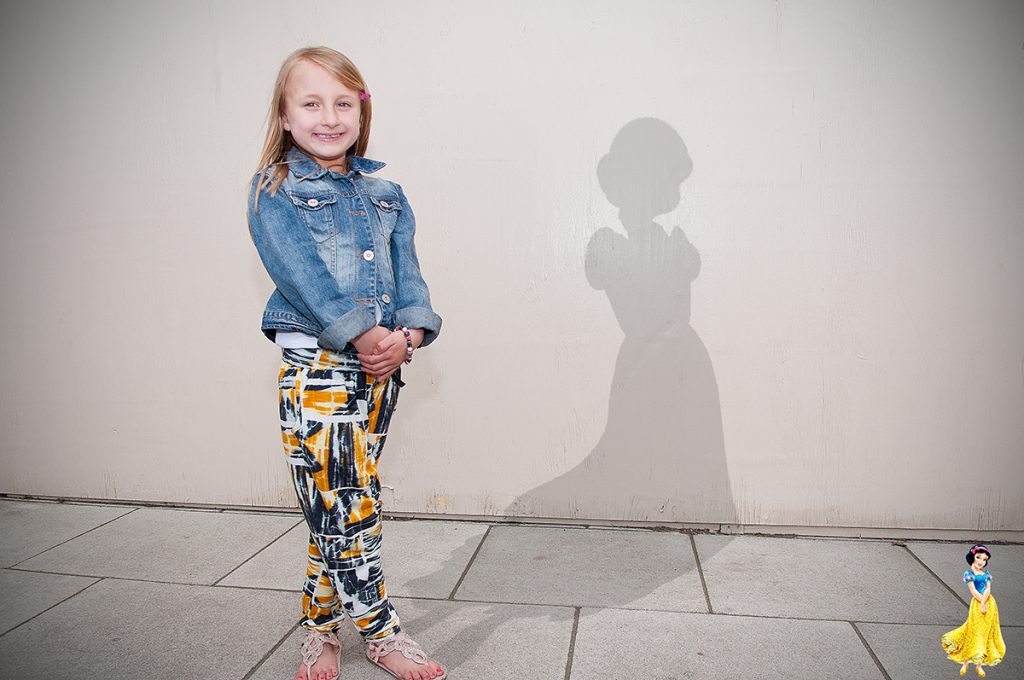 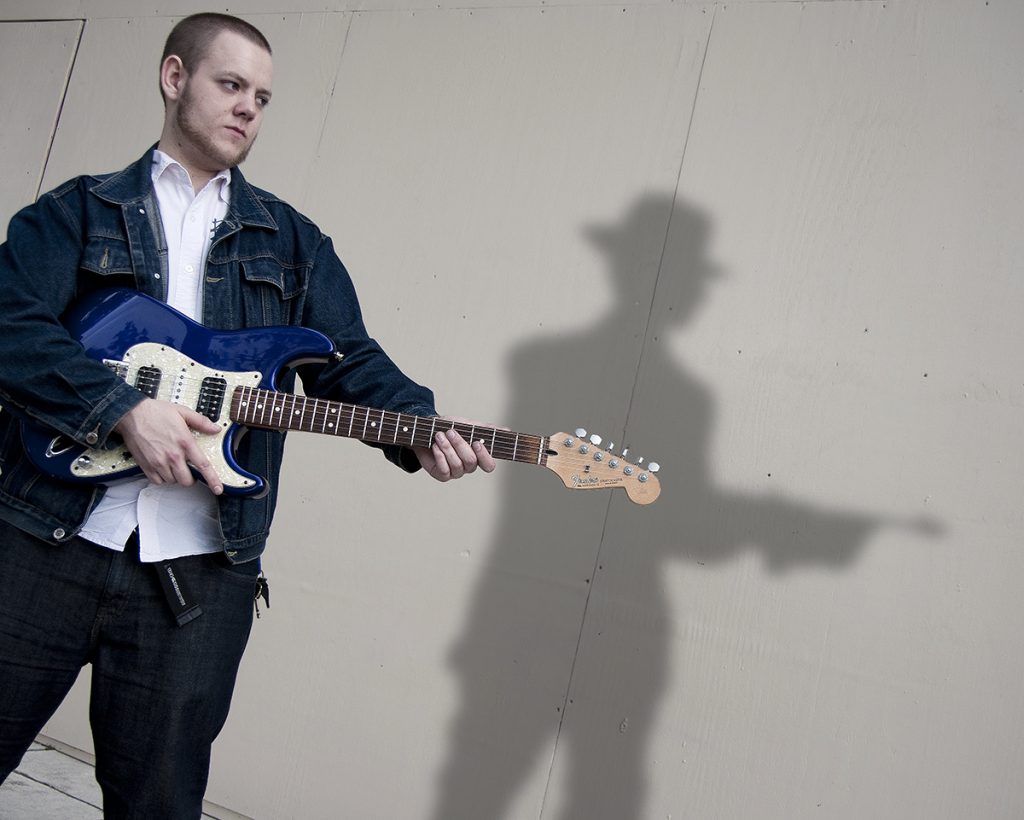 Come on, you know it’s pretty cool! Let’s pick on the princess and see how to do it nice and simply. My advice to you is to create the photo around the clipart. Get yourself on over to Adobe Stock and find the picture you want for your shadow, have it saved on your phone so you can refer to it during your shoot and fire away until your model has the pose you need (and a wall behind them!)

Crack open a copy of Photoshop and load up your image, thusly:- 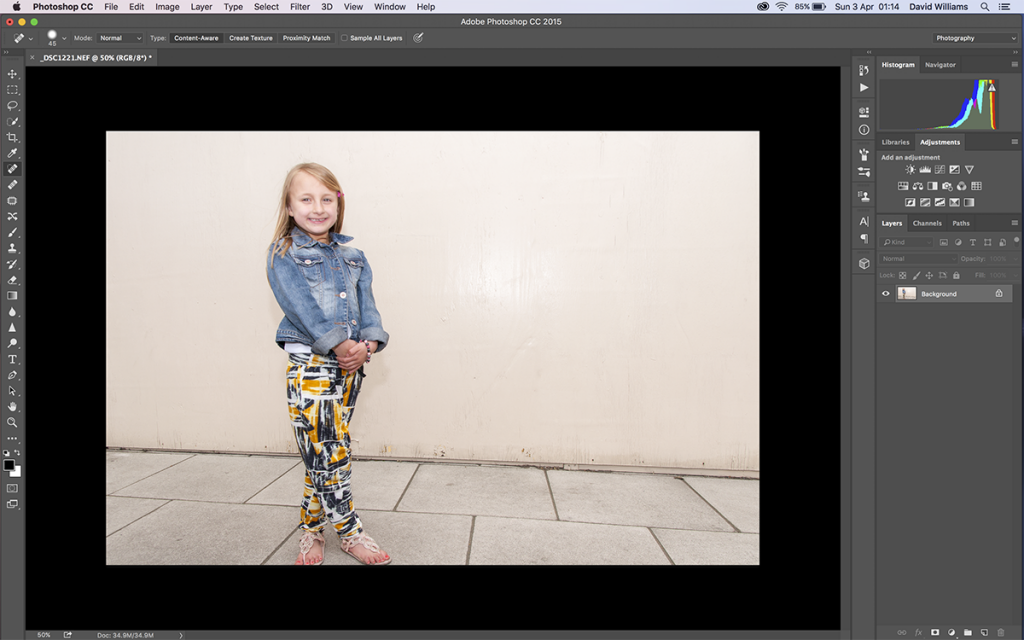 Also open up your shadow image. In this case it’s Snow White from the famous Disney animation, Snow White 😉

You need to get your marching ants on and select your outline, which we’ll use to create the shadow. I used the Magic Wand (shortcut: W) 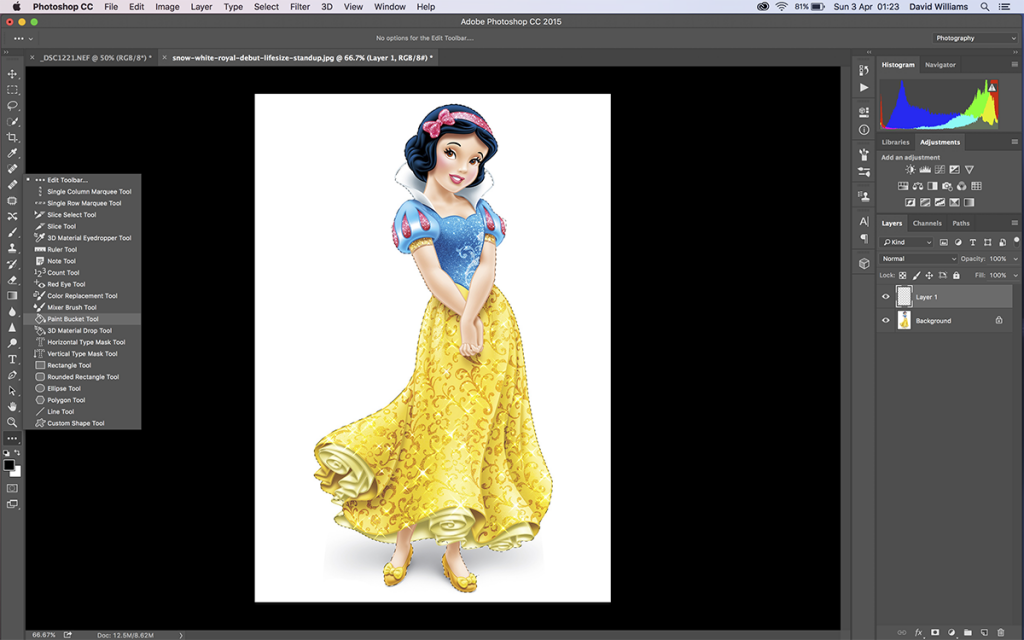 Once this is done, get yourself a new layer (shortcut Cmd+shift+N (Mac)  or Ctrl+shift+N (PC) ) and select your paint bucket tool (shortcut: G) and fill in your selection, now transposed onto the new black layer, with black. 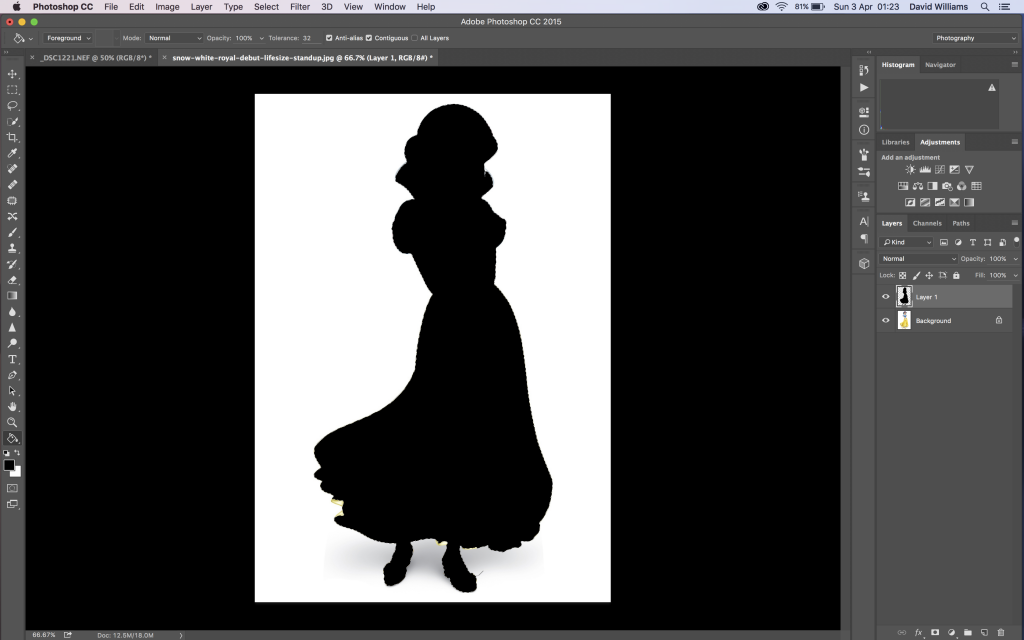 We don’t need to do anything further to our shadow file, so long as the selection is good enough it’s just a simple copy and paste over to the photo we want it to feature in. 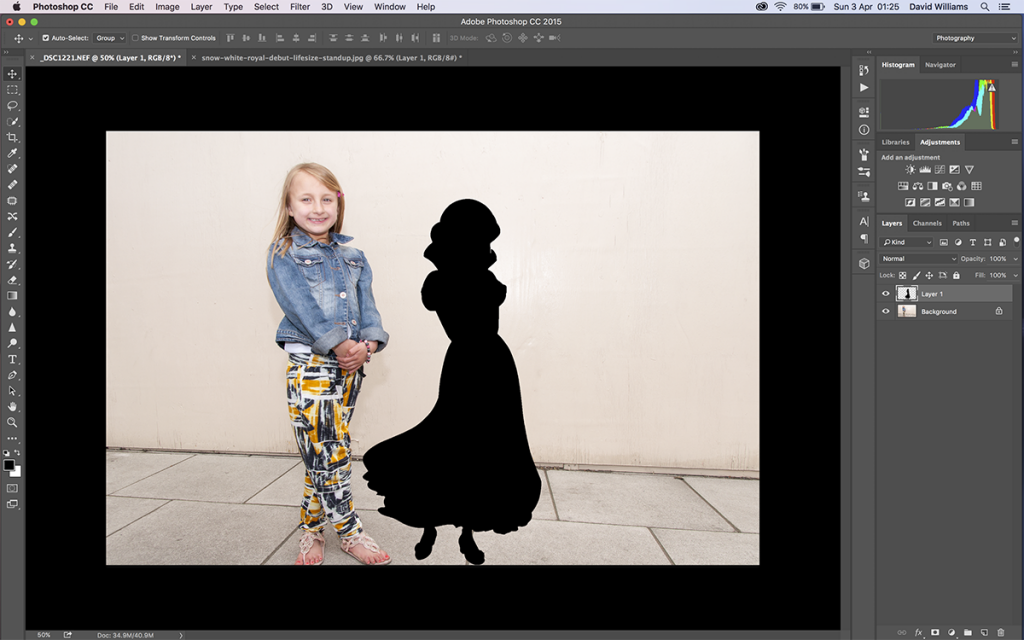 By copying and pasting we’ve stuck our black silhouette into a new layer, but now there’s a different problem to contend with – the seam where the wall meets the floor. Here’s another opportunity to show off your selection skills, this time with the lasso tool (shortcut: L) which we’ll take advantage of here to get the straight line.

If you select a spot precisely on the seam of the wall and floor to the left, then trace widely around the base of the shadow until you get to the seam on the right, your selection will automatically finish itself off by snapping back to the start point on the left, thereby creating a perfect line along the seam and saving us the effort. 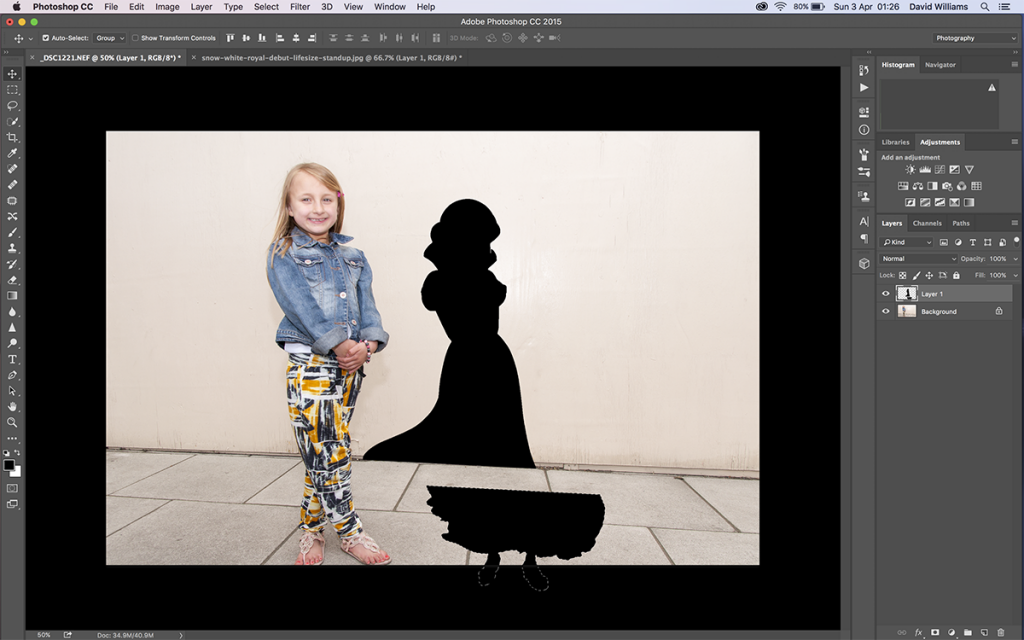 See how it’s cut straight? So, that’s our next piece of the puzzle. Leaving it where it joins the rest of the shadow, and leaving the new selection active, select the ‘skew’ transform tool. With this tool it’s now a case of moving the bottom end of the shadow around until it meets the feet, then using the eraser tool to cut the holes where it needs to disappear behind the model. It really doesn’t need to be the tidiest job, it just needs to be roughly correct. In tidying up the join, I’ve used a brush to draw in the shadow along the length of the feet. 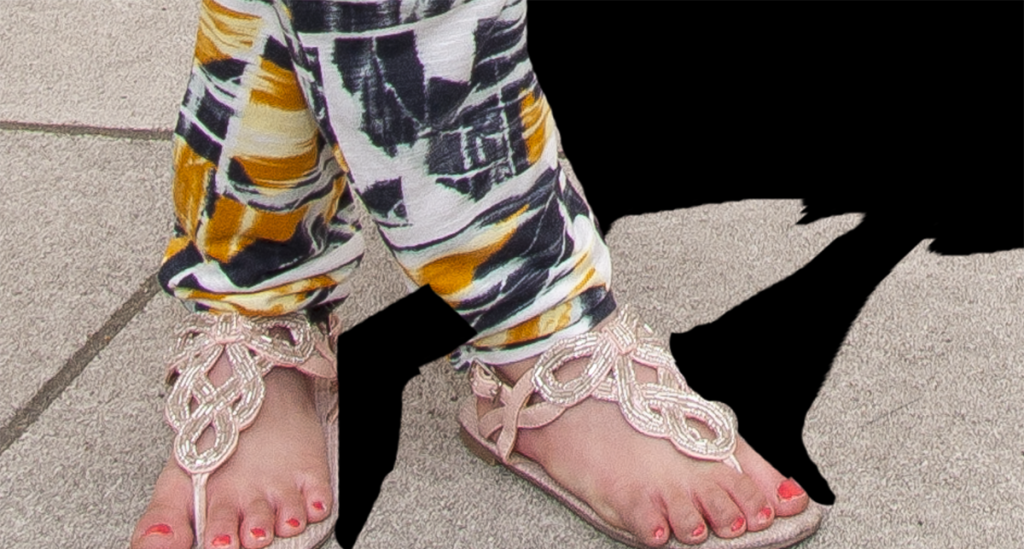 Once that’s done, there’s one last thing to do to get your shadow looking like a shadow. With your shadow layer selected, go and drag your opacity slider down on normal blend mode. I dropped down to 12%. Finish off with a little bit of blur to your shadow layer and hey presto, happy parents with a picture of their princess! 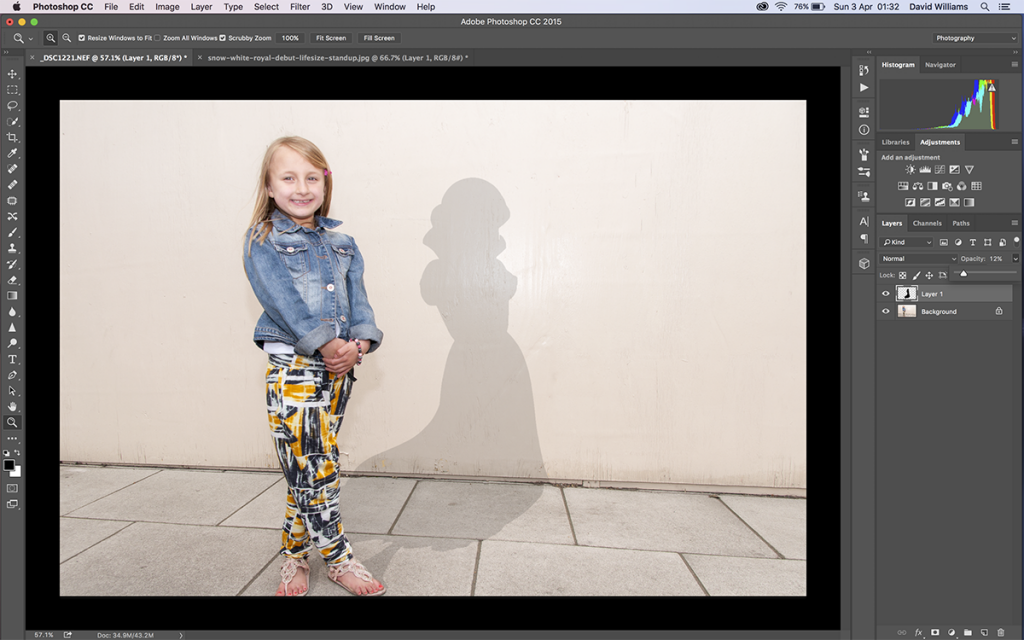