If you’ve ever wanted to create interesting and varied paint effects for your photographs, without having to invest a lot of time and money in a complex product like Corel Painter, you should consider Topaz Simplify 3. Simplify carries several basic preset types ranging from Cartoon and Color Sketch looks, to simulated Water Color, Underpainting and an interesting preset called BuzSim. In this tutorial we’ll take a look at the latter and see how it can assist us in creating painted landscape images from our photos with just a few steps.

First from Photoshop CS5 choose Filter > Topaz Labs > Simplify 3. This will open the UI which is similar to other Topaz plugins, with presets on the left, a big preview area in the middle of the window, and creative settings on the right (hidden in the shot below to show more of the target image). 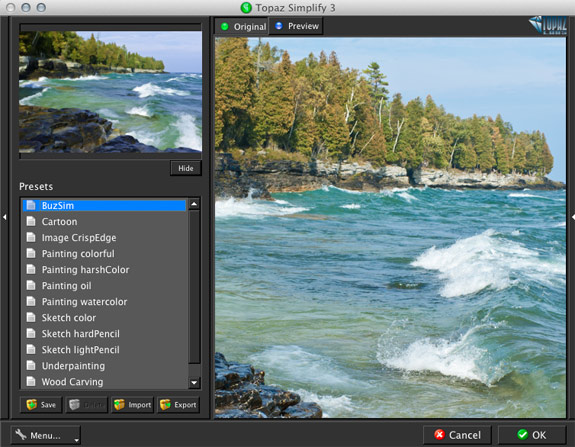 Once you’ve selected your preset of choice (BuzSim in this case), you can collapse the presets panel by clicking the small triangle (left edge, center of the window). Click the triangle on the right edge to open the settings panel, if it’s not open by default.  The first thing we can do to start creating a painterly look is to simplify the details in the image. This is accomplished using the the Simplify panel. Specifically, the Simplify Size control has a big impact on the number and size of details that are visible; use it to smooth things out. A modest increase in this value plus a small increase in the Feature Boost setting (which tends to exaggerate the details left intact by the Simplify Size control), will give you a good start.

Since our objective here was to smooth out the details, we can skip over the Details controls (which generally are used to add them back in to varying degrees)  and jump down to the Edges panel. You may need to zoom in past 50% when working with these controls, depending on the image. This Edges panel is where you define the mid-tone contrast edges and other elements that make the paint effect “pop”. First try boosting the Edge Strength out to a value of 1, give or take a few points. This will often create better defined color regions, accentuating the more obvious details or “brush strokes”. 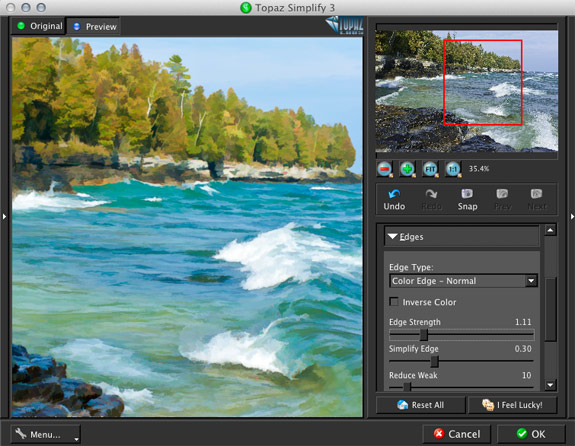 If you’d like to add or subtract edge details, try increasing or decreasing the Simplify Edge setting. The oddly named Reduce Weak setting is designed to remove faint edges. The more faint edges or small details you have in the areas perceived as “broad brush strokes”, the more distracting they can be, although it is a subjective choice to be sure. Here I increased the value slightly to .35 as this setting is fine-tuned. You can remove thin edges (different from faint ones) with the Reduce Small setting. The thinner an edge is, the more likely it will be hidden as you increase the value of this setting. Here the differences were so subtle that I left the default value as-is. 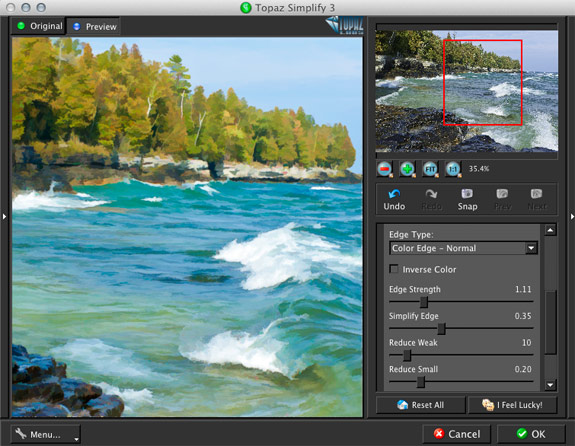 Last but not least, as the prior settings tended to over-do the saturation, I opened the Adjust panel and reduced the values for Saturation (which affects all colors) and Saturation Boost (which affects the colors that are less saturated relative to others). Then, a small boost in Contrast to give the image a bit more edge and we’re done! 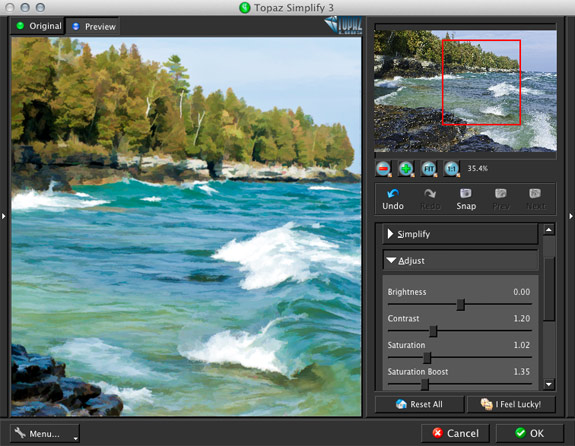 Simplify 3 certainly isn’t as powerful as an application like Painter but it has more control than most painterly Photoshop filters, and it’s fun and easy to experiment with, so give it a shot!