Earlier this week, Topaz Labs announced a free upgrade (for existing users) to its Lens Effects plugin. One of the more interesting and useful features it offers is a simulated Fog Effect (who doesn’t enjoy a nice holiday mist? 😉 ), using either Lightroom or Photoshop as your “launch point”. Here we’ll use Lightroom, showing how simple a process it can be to enhance your overcast shots with a bit of fog or mist, once you’ve made the appropriate raw edits. Note: in order to use Topaz Labs plugins with Lightroom, you first need to install an extra “widget” called “Fusion Express 2” during the plugin installation process.

Once you’re ready to open your raw image into Lens Effects, right-click on the image preview and choose Edit In > Edit in Topaz Fusion Effects 2. Lightroom displays a dialog asking how you would like to handle the image copy for the “return trip” to Lightroom. Choose the “Stack with Original” option to ensure the new file is grouped with its “cousin”, then click Edit. 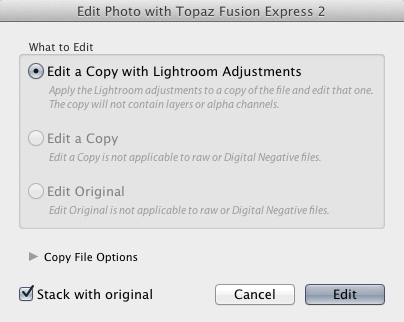 Afterward a list dialog will appear, allowing you to choose from all of the Topaz plugins that you have installed. Choose Lens Effects and click Run. After a few seconds your image will open in Lens Effects, which uses a straightforward interface. Down the left side you have (from top to bottom): an image preview that shows each effect preset, an Effects list which displays the available effect types, and a Presets list which displays the variations for each effect. Here we’ll select Filter – Fog, and then choose a Preset that you like by clicking it. I chose Ground Fog 3 because I wanted to start with the fog in the lower half of the photograph. 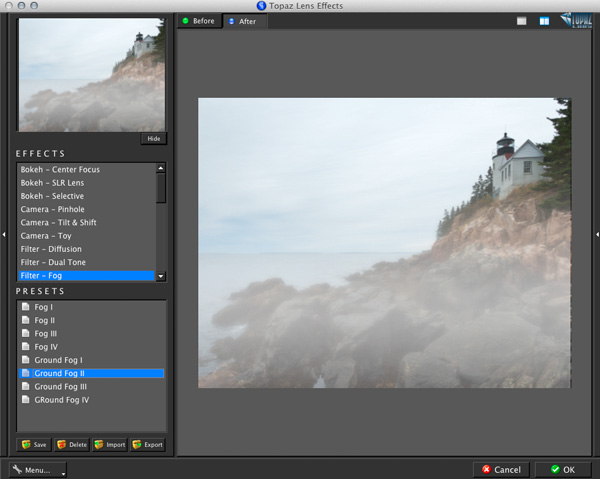 Next, collapse the controls on the left side of the window to create more preview space  if needed (just click the small white triangle on the left edge of the window). Notice also that there are Before and After tabs above the main preview area, or if you prefer you can split the preview using the button near the top right corner of the image. Open the Adjustments panel by clicking the white triangle on the right edge of the window. Click the Fog Adjustments widget to see the different controls at your disposal. 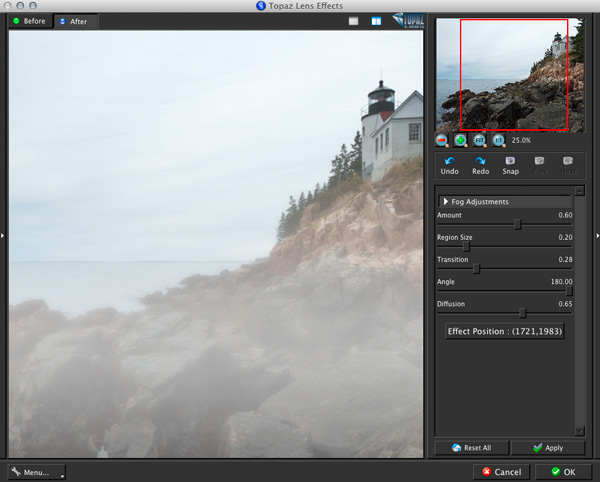 The Amount slider controls the “density” of the fog by varying the opacity of the effect, while the Region Size slider determines how much of the frame is covered by the effect. The Transition control determines how pronounced the “drop off”  is where the fog effect ends. Below I’ve centered the effect on the image and revved up the Amount (far too much), while dropping the Transition to zero to illustrate the effect of these controls. 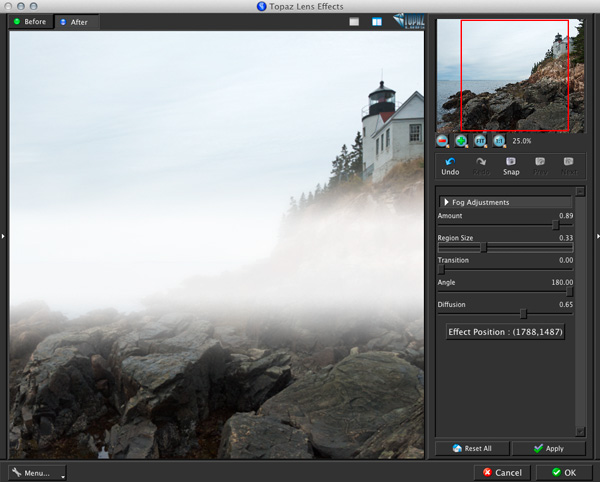 The Angle slider will rotate the fog region to match any geographical features that might require it, while the Diffusion setting allows you to further control the illusion of fog transparency, by controlling the amount of blur being applied to the underlying details. Finally, the Effect Position button allows you to click a spot on the preview to center the effect at that location.

For this image I wanted the fog to hang in the lower half of the image, but allow a fair amount of detail to show through as well. Typically I start  with an Amount of .5 and in this case I also centered the effect on the boulders near the bottom of the frame. Once the bottom of the frame was covered evenly, I boosted the Region Size value until the effect was starting to cover the rocks on the cliff face. 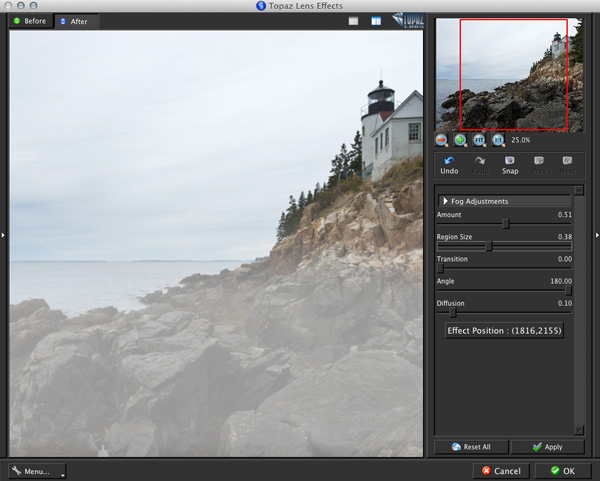 The initial Fog settings place the effect near the ground and set its overall strength and dimensions.

Since no Rotation was required, next I bumped up the Diffusion value up to soften the details on the shoreline, and also increased the Amount value again, until the fog started to look more realistic. 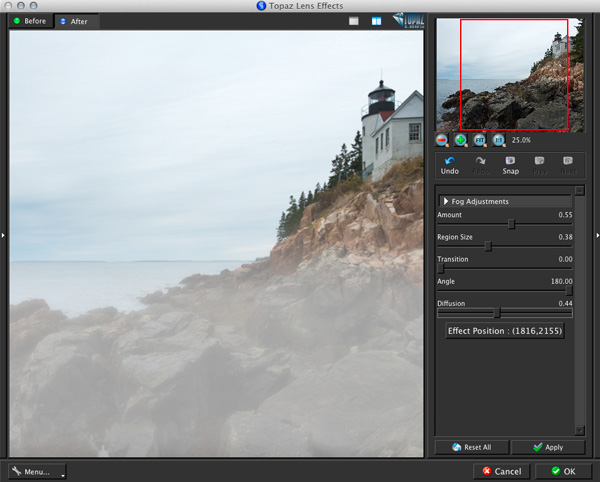 Additional tweaks to the Fog effect enhance the details and density of the effect.

Finally, I tweaked the Region Size and Transition sliders until the look of the effect seemed right to me, and then raised the Effect Position just slightly to give the appearance of a bit more visible detail close to the camera and a bit more fog density at eye-level. When you’re ready, click the OK button (bottom right) and your image will be stacked back in Lightroom with the original. 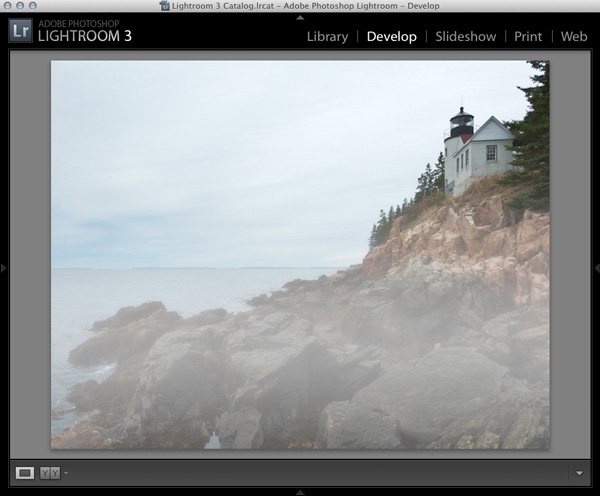 Our final shot with completed Fog effect, as seen back in Lightroom. Quick and easy!

As you can see, with just a bit of extra time you can quickly add realistic looking fog and mist effects to your photographs (especially those taken in overcast light that might benefit from same) using this simple plugin.