There are tons of digital photo restoration tutorials online these days, on fixing torn pieces on old photos, and matching colors when adding things to the photo.

One recent tutorial put torn pieces back and then matched the color because the tones were different. The two pieces matched perfectly, with very little effort, even though these two halves had been apart long enough, and far enough apart that they were two completely different colors / tones.

All I can say about that is that this particular photo has to be the luckiest piece of paper on the planet. The harsh reality is that very, very few old photos that have pieces torn completely off will still be complete, as in all the pieces still around. If they do happen to all survive, the pieces won’t have all nice, clean edges – I don’t mean knife sharp edges, clean as in fitting together perfectly with the edge it was torn from. The paper will have torn, cracked, peeled, and split over time, on all the pieces, in different areas.

The tones, though, those will be fairly the same on all the pieces if they’re all kept together. They are all the same composition of paper and chemicals and the atmosphere they’re kept in will be the same. If these pieces are kept that far apart to result in completely different tones, you will truly be among the charmed ones to still not only have them but to be able to figure out exactly which photo belongs to the missing pieces. Granted, if the photo is torn in half, with two large pieces, there’s more of a chance the pieces, at least will still be around, but the chances of a clean fit between pieces and two completely different tones are still slim to none.

However, there are certain things that happen to photos of a certain age, those 70-somethings and older, all the time. Missing pieces – I mean really missing, as in gone, “age spots” those nasty little specks and blemishes, scratches, cracks, faded areas, disappearing sky’s and fingerprints. Let’s start with something easy: “Age spots”.

Age spots, not an official name, mind you, just what I call them (yet another Janine-ism), can be caused by little chips in the top layer of a photo or by rust, acid or dust. They can be light, dark, black, brown, red or white. They can be – will be – on old photos, but can and do show up on photos of any age. What they’re made up from matters, of course, in the further preservation of the photo (for instance, if it’s being eaten by acid, best you find out the source of the acid. If it’s an external source, such as what the photo is stored in, you need to find alternative storage solutions, fast!), it doesn’t matter much in terms of digital photo restoration. Yes, you’ll need to find different ways of repairing different damage – what works for tiny little specks isn’t going to work the same for large patches of black mold, but for our purposes, today, we’re going to call a spot a spot. No matter what caused it, what color it is, or how small it is, it needs to be fixed. 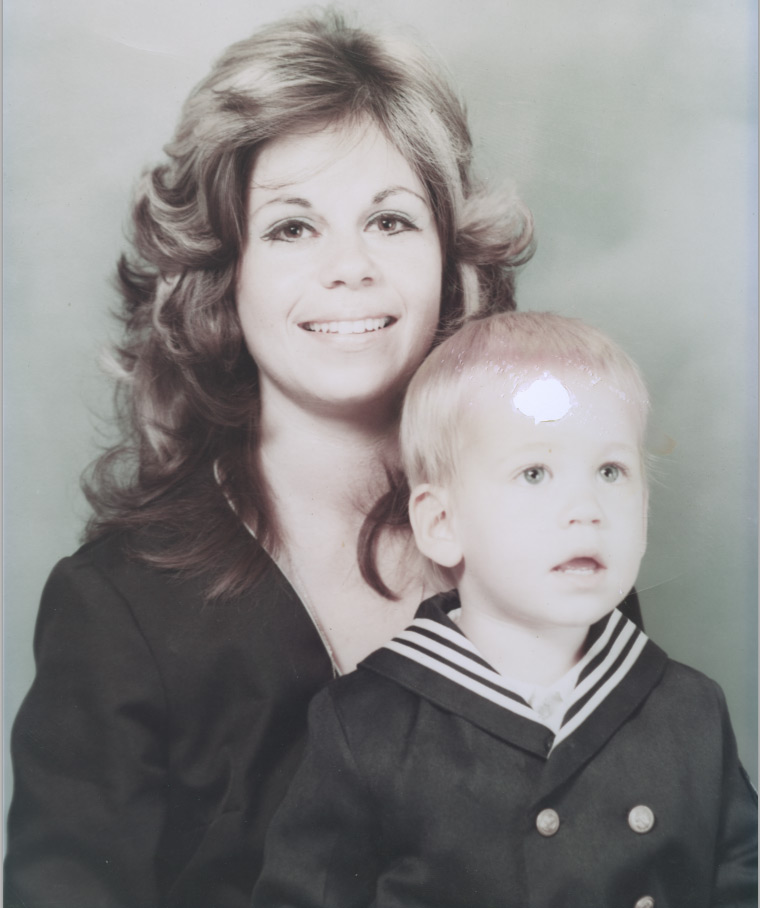 This is a photo a client brought to me to fix the color, and to take care of the rather obvious piece missing on the baby’s forehead. That and the bend at the top left is all the client thought was wrong with this. After seeing the photo magnified with an 8X loupe, they were shocked and they didn’t even see the whole picture, so to speak. 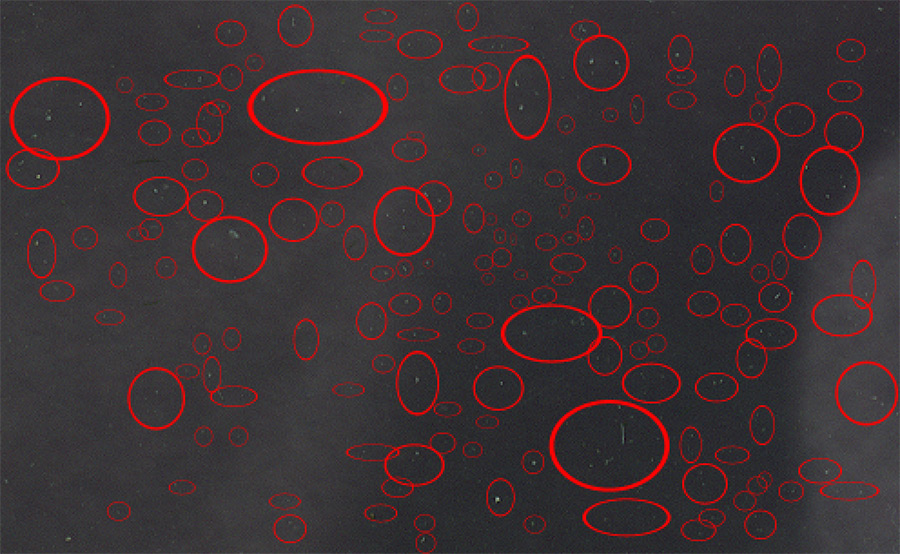 This is an area with all (I know, I missed a few!) the spots that should be fixed, if you’re doing a really good restoration. To give you an idea of the context, here’s the same area taken back a little. 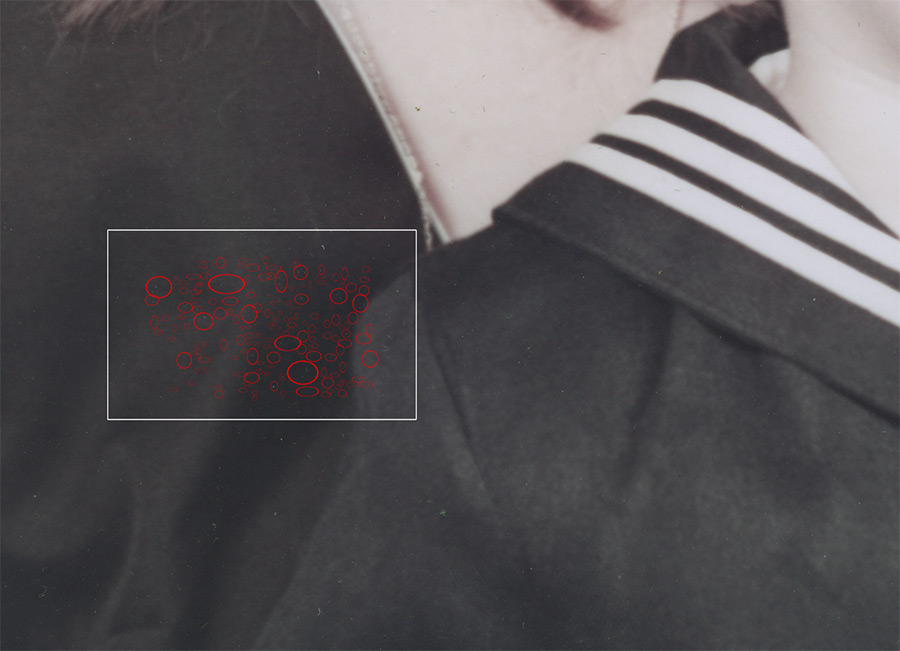 I said it was one of the easy fixes, and it is. I never said it would be quick! It takes patience and maybe more than a few breaks, especially when your eyes start going all fuzzy, but it will be very much worth it when it’s done, because it will be done right! Good tools to use for this are the Healing Brush and the Clone stamp tools. The Patch Tool might be alright for some of the larger areas, but all that making selections would get really old, really fast. Even the Clone Tool could get fairly monotonous, so I’d use the Healing Brush as much as I could. Remember, the Healing Brush, as well as the Patch Tool, only work on a ‘filled’ layer, one that actually contains pixels, so make a copy of your original to work on (CMD or Ctrl + J). Keep your selection brush on the small size, just a tiny bit larger than the area you’re ‘healing’.

More:  Q & A With The Restorationist Janine Smith

Work on the bigger spots first, zooming in to about 200%. Next, go up to 300%. Maybe even 400% on your next pass. No magic fix-it tutorial, just time and patience! Fixing ‘age spots on your old photos really is easy! It’s the patience that’s hard! Below is a non-finished ‘after’ shot. It’s a brand new project I just got Monday (2 days before this runs) so I haven’t had the time, yet, to finish! Like I said, it’s not fast work, but doing it the right way is imminently the most rewarding work! 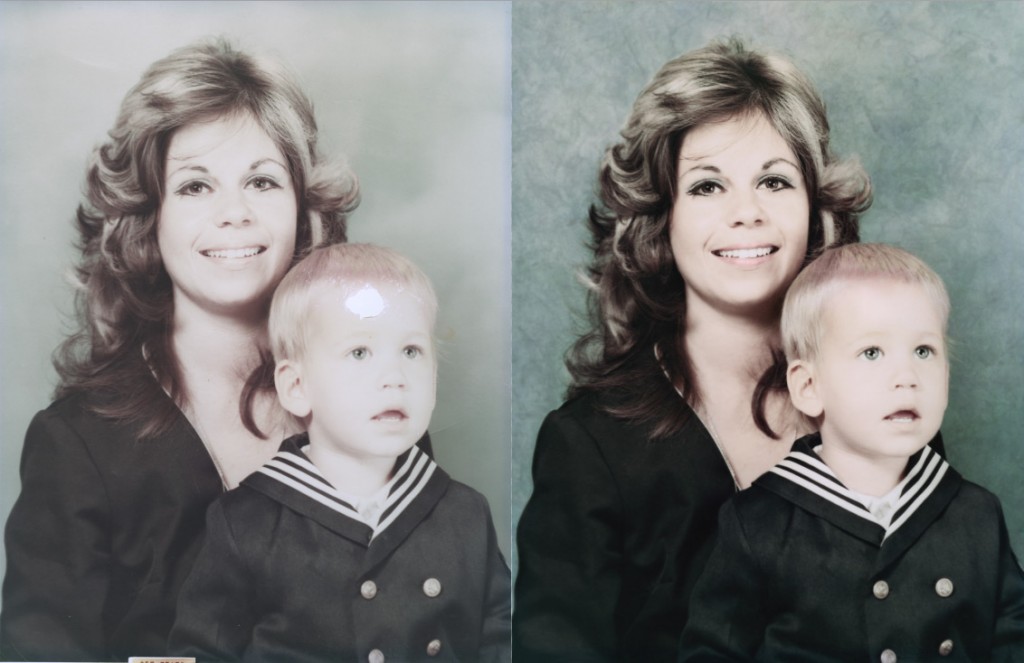